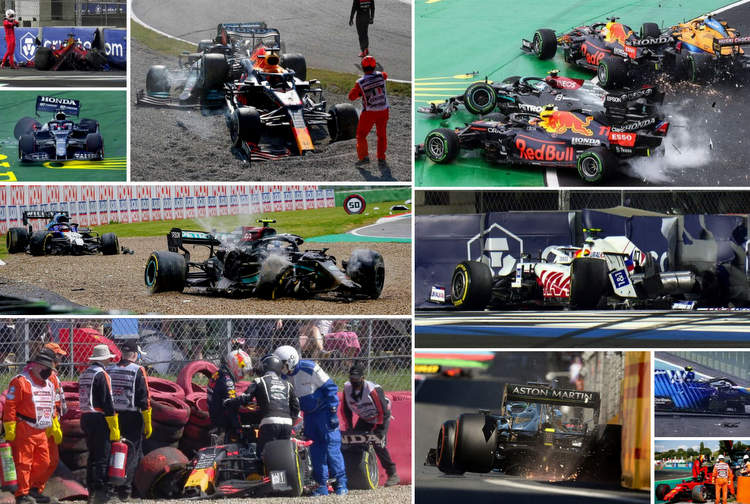 Formula 1 is an expensive sport, having the most technologically advanced race cars, elite drivers, and complex operations. Then you have the crashes, so how much did those cost the teams in 2021?

F1maximaal posted a detailed list of crash costs for each driver this season, and doing a quick calculation, the crash damages caused by the best 20 drivers in the world, added around €38-million to the teams’ budgets. And with the budget caps being a thing in F1 nowadays, the costs of crashes are to be reckoned with.

Not all drivers cost their teams as much as others, some of them kept it clean while others made their teams haemorrhage money this year.

He is a rookie, and not to forget that he was driving that evil, undeveloped Haas car. Nevertheless, young Mick gave Guenther Steiner a headache worth € 4.2-million, putting him on top of this infamous list, with his rookie teammate Nikita Mazepin in eighth place adding another €2.46-million to Haas’ pains.

The second most expensive driver was Ferrari’s Charles Leclerc, the Monegasque was responsible for €4-million worth of car damage, his Monaco crash at the end of qualifying probably costing more than just money, as a victory was on the cards for the young Ferrari driver that weekend.

Max Verstappen might have won this year’s F1 Drivers Crown, but it didn’t come cheap as his tally of crash costs was €3.88 Million putting him third overall, with Copse and Monza springing into mind immediately, while you can’t blame the Dutchman for Baku.

But in all likelihood, Christian Horner will forget all that as he looks at Verstappen’s trophy in the Red Bull cabinet every time he enters the team’s HQ in Milton Keynes.

Nicholas Latifi, in fourth, cost Williams €3.11-million in crashes, with his most infamous being during the final in Abu Dhabi, for which the Canadian driver was wrongfully bullied on social media, as he was seen to have played a role in the Championship’s chaotic outcome.

The sport’s best ‘wingman’, Valtteri Bottas was fifth in the standings with €2.71-million, his crash in Imola with George Russell being a major contributor to this figure, but helping his team secure their eighth consecutive Constructors’ Title, with the money that comes with it, should make up for it.

Outside the top five, but still within the seven-figures

Such was the cost of crashes this year that the top 14 drivers on this list have caused seven-figure-crash costs to their teams, with Lance Stroll costing his father € 2.68-million and sixth, followed by Grandprix247’s rookie of the year, Yuki Tsunoda in seventh, making his team dish out € 2.61-million.

As mentioned, Mazepin, in eighth cost his team – and dad – € 2.46-million, followed by the now-retired Kimi Raikkonen who created € 1.95 Million worth of car damage for Alfa Romeo as a farewell gift.

George Russell, who was the second party involved in Bottas’ aforementioned Imola crash cost Williams another € 1.84 Million, taking tenth place, something he should be more careful about in 2022 at his new team Mercedes.

Carlos Sainz cost the Scuderia € 1.75-million as he got used to his new car, but made up for it with his impressive debut season in Red. He was 11th and ahead of another impressive driver, Lando Norris, who was 12th costing Zak Brown € 1.45-million.

This year’s Championship runner-up, Lewis Hamilton cost Mercedes € 1.23-million after his season-long tussle with Verstappen, a bill Toto Wolff would have been happy to foot for his star driver, who was 13th on this list ahead of the impressive Pierre Gasly in 14th with a crash tag of € 1.11-million.

Going into the six-figures, Sergio Perez leads this pack in 15th place and a €939,000 cost of repairs on his RB16B, which Helmut Marko won’t be complaining about, after the Checo’s impressive teamwork in Turkey and Abu Dhabi.

In 16th is the now-former F1 driver Antonio Giovinazzi who cost his team €854,000 worth of car damage, ahead of Daniel Ricciardo who, despite his struggles this year was 17th, and light-footed on his MCL25M, costing the Woking outfit €713,000, as Sebastian Vettel occupied 18th, taking care of his “Honey Ryder”, not costing his team more than €660,000 in repairs.

The best drivers who didn’t cost any major financial headaches for their team were the Alpine pair of Fernando Alonso and Esteban Ocon, 19th and 20th respectively with a combined cost of €595,000 to the French team.

See the table below for the detailed costs per driver. 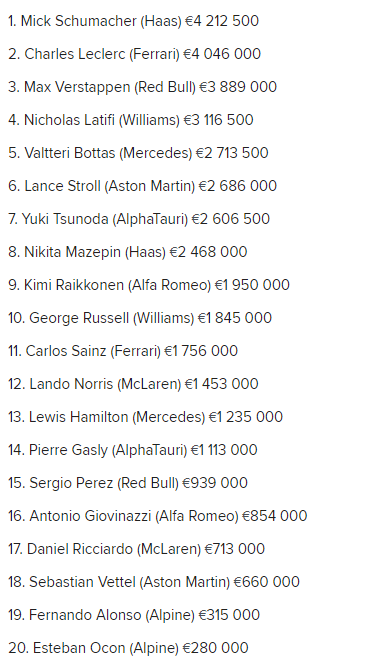