Binotto remains F1 boss as Ferrari build for the future 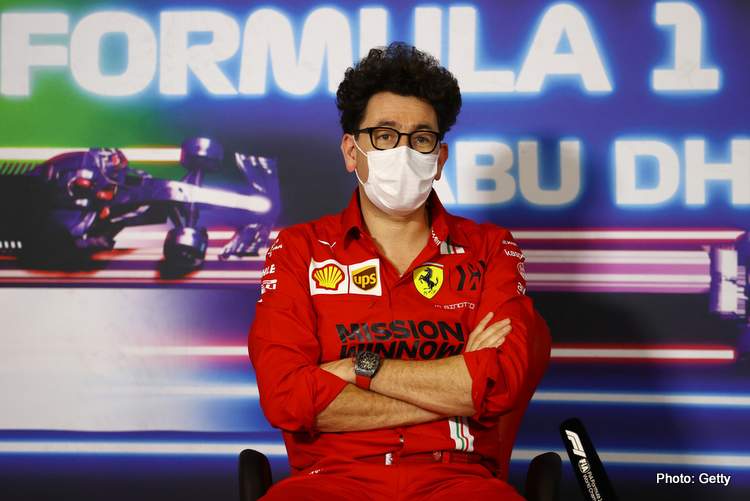 The reshaping of the management team is aimed at sharpening its technology focus and product exclusivity as the luxury sports car maker embraces electrification.

Binotto will be Ferrari’s team principal in the F1 world championship for the fourth consecutive year. The Lausanne-born engineer, took over from Maurizio Arrivabene in early 2019, at the height of a climb that brought him, since 1995, to be head of the fabled Gestione Sportiva at Maranello.

Vigna, a tech industry veteran and a former top executive at chipmaker STMicroelectronics, took the CEO role in September with a task to drive Ferrari into the new era of cleaner, silent and interconnected mobility.

Functions including “Product Development and Research & Development”, “Digital & Data” and “Technologies & Infrastructures” will now directly report to the CEO, Ferrari said in a statement.

As part of the overhaul, the company appointed Gianmaria Fulgenzi – at Ferrari since 2002 and recently head of supply chain at its racing division – as chief product development officer, it said.

Silvia Gabrielli, who joined Ferrari in 2019 from Microsoft , was appointed chief digital and data officer to boost “the digital transformation process throughout the company, ensuring more data-driven and digitally focused processes.”

“The new organizational structure will further foster innovation, optimise processes and increase collaboration both internally and with partners,” Ferrari said in a statement.

Ferrari also hired Angelo Pesci from STMicro, where he has spent over 20 years dealing with financial planning, supply chain and product planning, services and operations. He was named chief purchasing and quality officer at the Italian company.

Bestinver analyst Andrea Trovarelli said in a report that Vigna’s decision to hire two top executives from STMicroelectronics suggested the CEO was “turning to trusted allies to aid his turnaround and to put the iconic manufacturer on course for electrification.”

In one of Vigna’s first major moves Ferrari, last month said it was shaking up its leadership structure, with three top executives leaving the company.

Vigna will run the “Brand Diversification” function on an interim basis, Ferrari confirmed.

And the name of Jean Todt hovers around Maranello

As for the Scuderia and Binotto, journalist Pepe Marino of MotoriOnline writes: “The path of Mattia Binotto at the helm has certainly not been memorable so far, with only three victories, all in 2019 in the context of difficult years and in which Ferrari is still trying to reorganize itself, as confirmed in the official company review.

“Speaking purely of the sporting side, and in particular F1, the 2022 championship should represent a turning point, given the regulatory changes aimed at levelling matters on track, or at least to reshuffle the cards.

“Development possibilities are limited, thus making a mistake with this year’s car would cause considerable damage, but this applies to all teams.

“After the “masked disqualification” of 2020, when the Ferrari ‘super-engine’ was effectively banned by the FIA, the Maranello team bounced back last year. Everything is focused on the season that is about to begin, with Carlos Sainz, the pleasant surprise of 2021 getting closer and closer.

“And the name of Jean Todt hovers around Maranello,” concluded the MotoriOnline report, referencing the out of work former FIA president and boss of the Reds during the Michael Schumacher heyday. (Reporting by Giulio Piovaccari; additional reporting by GP247)