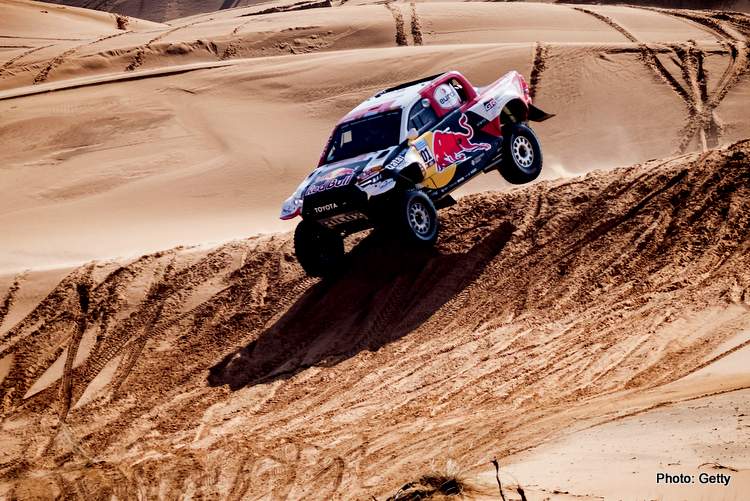 Nasser Al-Attiyah avoided the problems suffered by Sebastien Loeb and finished the Dakar Rally third stage extending his overall lead to 38 minutes on Tuesday with the spoils of stage victory going to Carlos Sainz.

After a strong second stage on Monday, Loeb, the nine-time world rally champion, started the 255-kilometre loop stage around Al Qaisumah, shortened by 100 kilometers because of recent flooding, just nine minutes behind Al-Attiyah overall but soon found himself in trouble.

His Prodrive’s longitudinal transmission broke after 10 minutes leaving him in two-wheel drive. Halfway through the stage in northern Saudi Arabia he was already 15 minutes off the pace.

“We only had front-wheel drive from 10 kilometers after the start. We did 250 kilometres like this,” Loeb said.

“Crossing the dunes and all the difficult conditions we had with this two-wheel-drive was really tough. I’m happy to be at the end of the stage losing only 33 minutes – it could have been even worse.”

Meanwhile, Al-Attiyah bided his time in his Toyota, and the Qatari finished eighth on a stage won by fellow three-time champion Carlos Sainz in 2 1/2 hours. Sainz earned his 40th career stage win, fourth-best in Dakar history.

Henk Lategan of South Africa was second, and Stephane Peterhansel of France third within two minutes.

Loeb was more than 33 minutes back and dropped to 38 minutes overall, still in second.

However, his lead over Adrien van Beveren of France was slashed to four seconds. Sunderland was 17th on the third stage while Van Beveren was ninth.

Matthias Walkner, Skyler Howes, Daniel Sanders — who claimed to deliberately stop for three minutes so as not win the stage — were also within nine minutes of Sunderland.

Joaquim Rodrigues of Portugal took the stage for the first Dakar win for him and his Hero team. Rodrigues dedicates his racing to brother-in-law Paulo Goncalves, who died on the 2020 Dakar.

“I was feeling so good, riding so fast that I even said to myself, ‘Paulo is riding with me here,´” Rodrigues said. “That thought came to me because all the navigation was on point. I think me and him, we won.”

Two-time champion Toby Price of Australia was second and Mason Klein of the United States, making his Dakar debut at 20, was third, a minute off the pace. (Report by Alan Baldwin)