Ecclestone: Flavio would be fantastic for Ferrari 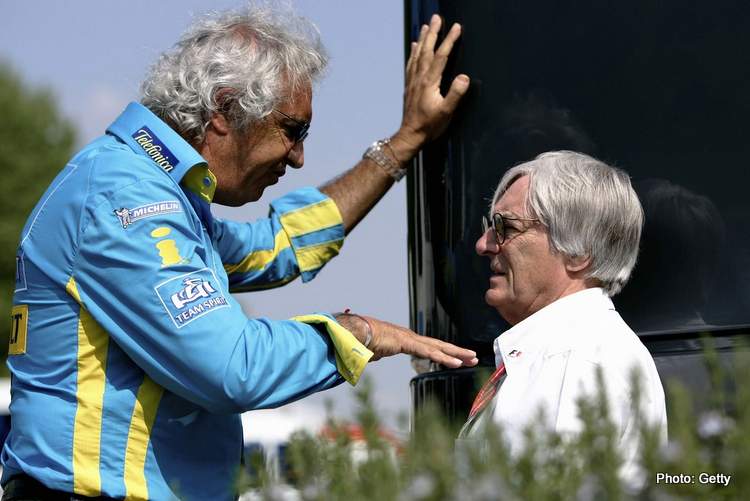 Bernie Ecclestone, former Formula 1 Boss, has come out – again – to say that Flavio Briatore would be a fantastic choice to run Ferrari, the fabled team going through one of the toughest periods in it’s illustrious history.

Ferrari haven’t won an F1 Drivers’ Title since Kimi Raikkonen’s in 2007, with their last Constructors’ Title being in 2008, as Lewis Hamilton beat the Scuderia’s Felipe Massa to the F1 Drivers’ Crown by one point, after a last-lap-pass by the Briton on Toyota’s Timo Glock at the season finale in Brazil.

Ferrari fought for the title several times since; with Alonso in 2010 and 2012, then with Sebastian Vettel in 2017 and 2018, but could never seal the deal for various reasons.

Speaking to La Gazzetta dello Sport, Ecclestone gave his view on why Ferrari isn’t performing and what should be done.

“I’ve got my feelings about Ferrari and always have done: I’m a super, super, super Ferrari supporter,” Ecclestone said.

“But I think at the moment, when they were really performing well was when they didn’t have the whole Ferrari workforce and team run solely by Italians,” he claimed.

“Because at the moment, the trouble is everybody thinks they know what to do and they would like to make all the decisions on how and what [to do].

“But in the end, you think about when they were successful, most of the people weren’t Italians,” the Briton maintained.

Nothing wrong with Italians

“[There’s] nothing wrong with Italians,” Eccleston went on. “The trouble is if [they] all get together, each one wants to be in charge, which ain’t as it should be.

“You need one person completely in charge and not to be influenced by anybody else, which is not at all easy.

“It’s not easy for the current team leader [Mattia Binotto] to be there, I’m quite sure,” Ecclestone admitted.

It is not the first time he ever said it, but Ecclestone still believes that Italian Flavio Briatore would be the perfect person to run the Scuderia.

Briatore, former boss of Renault F1, was infamously known for the 2008 Singapore Grand Prix crashgate, where he was found guilty of ordering Nelson Piquet Jr. to crash his car, to get a Safety Car deployed and allow Fernando Alonso, his teammate at the time to win the race, which the Spaniard did.

Without going into further details, Briatore was banned from F1 for life. With the ban lifted in 2012, the Italian did not return to an active F1 role yet.

Ecclestone is adamant, that Briatore can sort out Ferrari’s issues, and said: “Flavio would be fantastic, because where Flavio would be good, he’d steal the right people from other teams.

“He wouldn’t care what nationality they were or anything.

“The people who were no good, he’d chuck out.

“So, actually, it’d be good to have Flavio back for a couple of years,” the 91-year-old concluded.

Could Jean Todt be the savior?

Recently the ‘former’ FIA president, Jean Todt ran Ferrari between 1994 and 2007, during which he oversaw the Michael Schumacher dominance streak between 2000 and 2004, as the team won five consecutive F1 Title doubles.

With Todt’s last term as FIA president over, and Mohammed Ben Sulayem elected as his successor, rumors surfaced linking the Frenchman with a role at Ferrari.

However, current and under-pressure Ferrari boss Mattia Binotto, was quick to rubbish these rumors labelling them as speculation.

“I heard and I read about some speculation in that respect, but I can say that so far they are only speculations,” he said to the media at the season-ending Abu Dhabi Grand Prix.

But could Jean Todt be the one who finally rescues Ferrari from the doldrums it is currently in?