Hamilton: It’s going to be an intense race 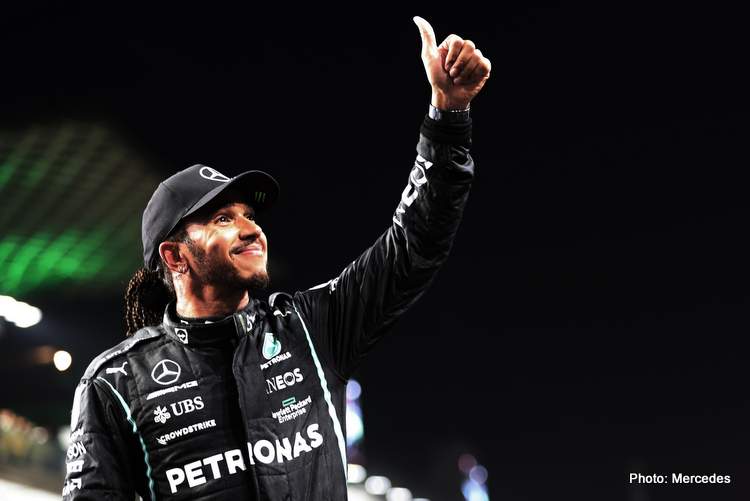 Lewis Hamilton was gifted his 103rd pole position start – arguably his most important one – for Sunday’s inaugural Saudi Arabian Grand Prix, at a vital stage in his quest for an unprecedented eighth Formula 1 world title.

And the gift came from title rival and Formula 1 World Championship leader, Max Verstappen who looked set for pole in the dying moments of qualifying at the daunting, brand-new Jeddah Corniche Circuit. But he made a mistake clattering the wall exiting the final turn of his final run.

What might have been a top spot start instead became third; things could get worse for the Dutchman depending on the damage to his Red Bull and if penalties will be required to repair the damage.

Of course, that all played finely into Hamilton’s hands on a Saturday afternoon in which Valtteri Bottas also found his A-game, despite a PU change between sessions, and will start second on the grid for an unlikely Mercedes front-row lockout.

“For us to get a one-two, I’m really proud of Valtteri and everyone on the team, this is a great result. Those guys [Red Bull] were just so fast. They’ve obviously fixed something from their setup and they were rapid,” noted the World Champion who will be hunting his 103rd Grand Prix win on Sunday.

Hamilton: I’m very proud and thankful that we were able to put it on the front row for Sunday

Later, in the Mercedes team report, Hamilton explained: “This place is one of the hardest tracks to get right, I was on the limit the whole way round and the car was on a knife-edge.

“Trying to pull out the maximum with the tyres was so tough. It’s difficult to understand why – it’s so warm here but we were having trouble getting temperature in the front and rears at the same time to have grip at the start of the lap.

“I’m very proud and thankful that we were able to put it on the front row for Sunday, it’s going to be an intense race, predicted Hamilton before adding: “It’s always important to have Valtteri beside me, particularly in this part of the year, he’s been driving exceptionally well and hopefully we can do a good job together.”

Bottas: This is one of the toughest tracks of the year, both mentally and physically

With two to go, Hamilton trails Verstappen by eight points in the F1 drivers standings while Mercedes lead Red Bull by five points in the constructors’ championship.

Alfa Romeo bound Bottas, making was for George Russell next year, could play a crucial role in where the titles end up.

He summed up his qualifying: “You get such an adrenaline rush from this track! Tomorrow’s going to be hard, this place is so intense but at least we’re starting in the best places. Given how tricky qualifying was today, it’s a great result.

“Starting on the left side tomorrow is definitely going to be dusty but I’ll be trying hard to keep the position. This is one of the toughest tracks of the year, both mentally and physically, which is exciting because anything can happen,” added the Finn.