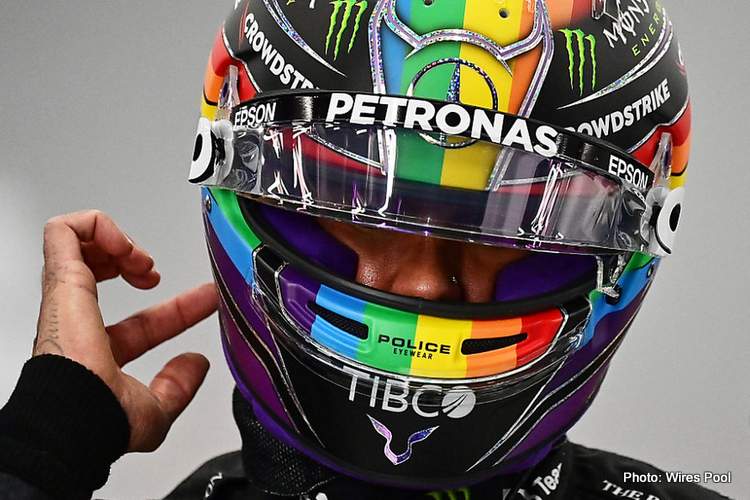 Lewis Hamilton was struck by the high-speed nature of the Jeddah Street Circuit after dominating day one of free practice for the inaugural Saudi Arabian Grand Prix but warns it might be dangerous.

Mercedes will have the “spicy engine” from Brazil bolted to the back of Hamilton’s W12 for qualifying and the race, but the Briton has been doing well with Friday’s PU, topping the timesheets at the end of the sessions and is clearly the man to beat with the best piece of kit to boot.

At a track that resembles Monaco on steroids running on fast-forward, Hamilton was a mere 0.056s quicker than title rival Max Verstappen at the end of FP1, but that gap increased to 0.195s in FP2 suggesting the Red Bull are again playing catch-up as they were in Qatar and Sao Paulo.

After owning Friday in Jeddah, Hamilton said in the Mercedes team report: “The track was rapid – unbelievably quick and with a lot of grip as well. Once you get in the rhythm, it’s beautiful to drive.

“The grip was very high from the moment we went out and was similar in both sessions. Traffic can be a problem here, it’s Monaco-esque and the closing distances to other cars was definitely getting dangerous,” added Hamilton who was shown on replays speeding perilously past slower cars on the inside lane.

The seven-time F1 World Champion continued: “We tried a couple of things with our setup, and although we aren’t rapid on single run pace compared to the others, our long-run pace seemed pretty good.

“The Medium and Hard tyre both performed well, the Soft is probably a little too soft for the high-speed sections, it feels like the tyre is giving up slightly.

“I’m generally happy with the setup, we changed a few things in between sessions, and we’ll work with the guys in the factory back home to make sure we have the correct setup for tomorrow,” added Hamilton.

Bottas: The biggest surprise was the tyres, they lasted well

In the sister car Valtteri Bottas was relishing the “adrenaline rush” the Corniche Circuit afforded drivers, before going on to sum up his day: “In FP1 the track was better than I expected, a little bit dusty but thanks to the other racing categories running here this weekend, it was improving step by step.

“They have done a nice job with the tarmac here, it was very grippy even though it’s new and with no real bumps, nice and smooth.

“It was good to get confirmation of the grip level here, you base your starting setup on the simulations and estimated grip level, and we started in a good place.

“The biggest surprise today was the tyres they lasted well and I’m not sure we’ll see many stops on Sunday. All the compounds seemed to work well here, even though you could feel the Softs giving up slightly in the high-speed corners.”

Mercedes trackside boss Andrew Shovlin gave the pit wall perspective: “As with any new track, a significant part of the first session is about understanding whether you’ve made the correct assumptions on grip and tyre behaviour, and in the warmer conditions of FP1 we had the car working well.

“The second session was more of a challenge in terms of single lap pace, we’ve got some ideas on how to tackle that and we’ll be running our simulator in Brackley overnight exploring a few directions.

“The long run pace seemed competitive, Lewis was a little happier than Valtteri, and we finished the day with quite different setups on the cars so there are some interesting comparisons to draw out of that data.

“It does seem like the car has good potential around this circuit but we’ve clearly got a bit of fine-tuning to do which will keep us busy overnight,” concluded Shovlin.

Ahead of Sunday’s Saudi Grand Prix, Round 21 of the 22 race 2021 F1 World Championship, Hamilton trails Verstappen by eight points in the Drivers’ Standings while Mercedes have a five-point lead over Red Bull in the Constructors’ Championship.