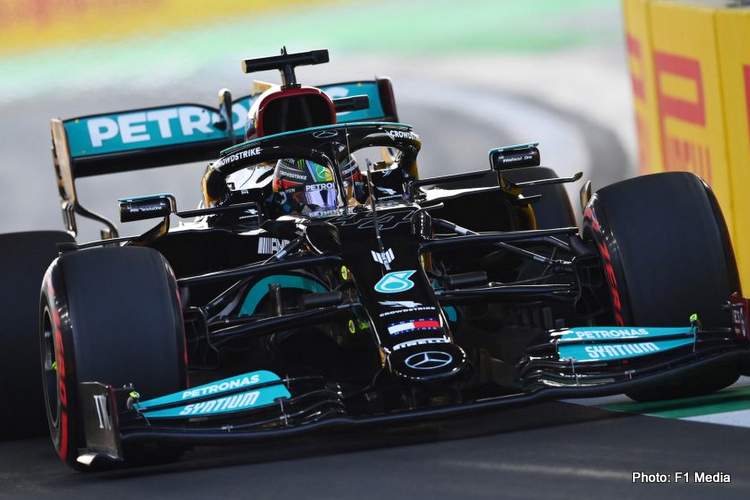 Formula 1 action resumed for the Saudi Arabian Grand Prix after a two-week break at the sport’s newest venue, the Jeddah Corniche Circuit, with Lewis Hamilton having the early advantage.

Being the latest street circuit to join the F1 calendar, the Jeddah Corniche Circuit, promises to be a proper challenge for the 20 best drivers in the world, with its high speed nature and lack of run-off areas, with walls – aplenty – ready to collect the car of any erring F1 driver.

There were many points to look out for in Jeddah, the penultimate round of this year’s F1 season, with the two title rivals Max Verstappen and Lewis Hamilton separated by eight points in the standings to the former’s advantage, with Mercedes “theoretically” considered to thrive around the brand new street circuit, not to mention the “spicy” Merc engine Hamilton will have bolted to his W12.

But with predictions being pointless this season, who’s to say that Verstappen and Red Bull won’t be the prevailing in Saudi Arabia.

Despite Verstappen starting off well, and hogging the top of the time sheets while on the Hard tyres, the advantage swung towards Hamilton once both cars bolted on the red-banded Soft tyres, the Briton finishing the first practice session in Saudi Arabia fastest of all with a time of 1:29.786.

Second went to the Dutchman who was only 0.056s off the pace of his title rival. Too close to call between the two.

Third went to Valtteri Bottas, the wingman 0.223s slower than his teammate, and was followed by AlphaTauri’s Pierre Gasly 0.255s off the Finn’s pace.

Antonio Giovinazzi was a surprise fifth for Alfa Romeo but over half a second off the pace, with Ferrari’s Carlos Sainz a further 0.246s behind the Italian in sixth.

Seventh was Sainz’s teammate Charles Leclerc, the Monegasque 0.036s slower than the Spaniard.

Daniel Ricciardo was eighth for McLaren and 0.822s off the top time, whilst his teammate Lando Norris was 13th over four tenths slower than the Aussie.

Fernando Alonso, who was on the podium in Qatar last time out, was ninth in the first practice session in Jeddah over one second down on Hamilton’s benchmark time.

Jump onboard for a lap of Jeddah Corniche Circuit, with your guide @Max33Verstappen 🎥#SaudiArabianGP 🇸🇦 #F1 pic.twitter.com/bxFVMphEhE

Outside the top ten

First to miss out on the top ten was Verstappen’s teammate Sergio Perez, who never seemed comfortable between the walls of the Jeddah Corniche Circuit, finishing 11th and 1.174s off the pace.

Esteban Ocon was 12th in the other Alpine, almost two tenths slower than his veteran teammate Alonso.

Norris as aforementioned was 13th ahead of Lance Stroll in 14th, the Canadian 1.258s off the top time.

Yuki Tsunoda who has an embarrassing moment exiting the pits was 15th, ahead of soon-to-be-retiring Kimi Raikkonen in 16th.

The Williams pair, George Russell and Nicholas Latifi, who where sporting tributes to the late team founder Sir Frank Williams on their cars, were 17th and 19th respectively, as they were split by the Haas of Mick Schumacher in 18th. 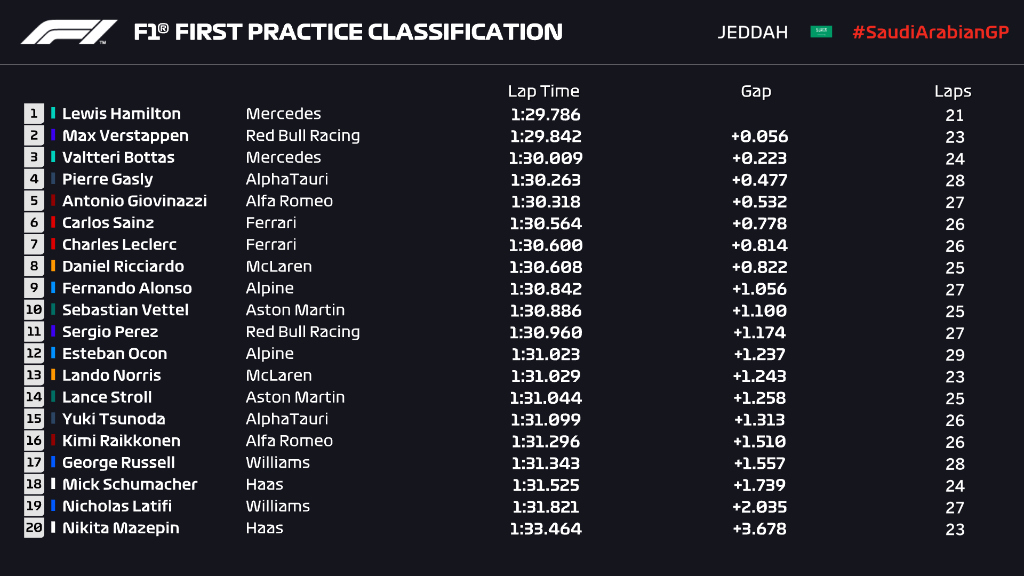