Tilke: Jeddah will be really, really close between Lewis and Max 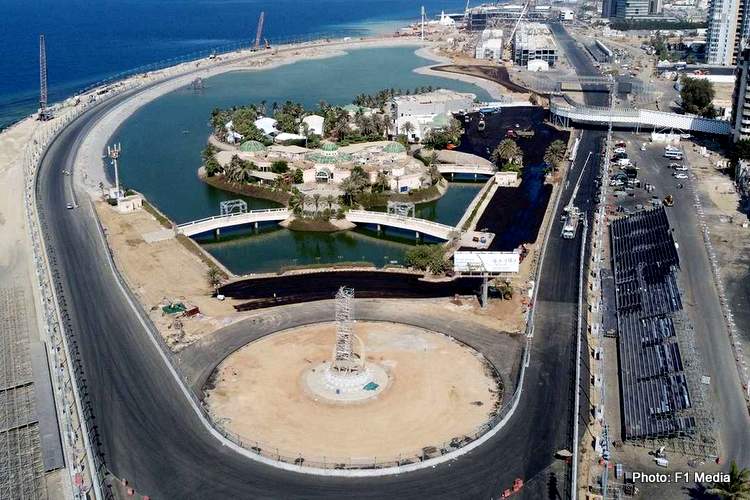 Formula 1’s doubleheader into the unknown continues next weekend at the inaugural Saudi Arabian Grand Prix, if anyone has an inkling of what might happen is Jeddah Corniche Circuit architect Carsten Tilke.

COVID-19 has played havoc with some F1 venues, big races falling off the calendar needing replacement. Last weekend the sport went to Qatar’s Losail International Circuit for the first time, Round 20 of the championship season also at a new venue.

But the track has been around since 2004 hosting MotoGP every year since then and had car racing including GP2 Series during this period.

However the Jeddah project was scratch built this year and word from sources on the ground, it is a race against time they will win, but expect work to carry on 24/7 until F1 cars roll out of the points for FP1 on Friday 3 December.

In an interview with talkSport Tilke first confirmed that the circuit will be ready for action: “It’s of course very close, a very tight project timeline but the track will be ready.

Tilke: What will be interesting is that there are three possible DRS zones

“It was really one of our most ambitious projects with the most time pressure to really make this happen in eight months, but in the end it’s really amazing what’s there now and everyone is excited for the next race.”

Tilke’s team have devised an ultra-fast, 6.2 kilometre, seaside layout which Saudi officials aim to overshadow Monaco in terms of glamour, which came with challenges for the architects

“We had this piece of land directly next to the Red Sea and it has this lagoon inside and they’ll be driving around the lagoon, and the good thing is we were quite flexible in this narrow strip, of course, we were restricted by it but we built most of the streets completely new.

“What will be interesting is that there are three possible DRS zones directly behind each other,” he explained. “So it’s three DRS zones and every time different corners after that, which can be really interesting.

“It’s not just straights, it’s a DRS zone but you have to be really concentrating because there are walls directly next to it, you have to steer.”

As for where he expected the action to happen, based on simulations and a gut feeling, Tilke predicted: “What I think is very interesting is the passage from T4 to T10, it’s a very fast flowing S combination, this will also be challenging for the drivers to find the right lines, and T13 is also a cool 12 per cent banked corner so there are a lot of different elements.”

As for comparisons with other Grand Prix venues, Tilke said: “It’s difficult to compare it, I really thought about this. You can maybe say this passage here, this passage there, but for me, I can’t compare it.

“It’s really fast, it doesn’t have all the buildings inside like a street circuit when you think of Baku or Monaco or Singapore. This makes it better to make nice corner combinations, and not 90-degree corners, which is normal in a city.”

The first race in Jeddah also happens to be one of the most important in the context of this year’s incredible title battle between challengers Red Bull and their Dutch ace Max Verstappen against serial champions Mercedes and their superstar Lewis Hamilton.

Impossible to predict who will be stronger Red Bull or Mercedes, Hamilton or Verstappen

There are eight points between them after 20 rounds of the title fight, the race in Saudi could see Verstappen crowned champion if Hamilton hits a problem or has a DNF. But with both their teams pulling out the big guns for the final two races, anything can happen in Round 21 on 5th December.

Tilke is more than aware of the importance of the race next Sunday: “It could go either way. On the one hand, it’s very fast, so the engine is important, but on the other hand, it’s a lot of corners. This is also important, so to be honest I’m not sure, we will see.

“At the moment the momentum is with Mercedes again. They are so strong, and it will be difficult to beat them, but you never know what will happen.

“Verstappen is in front and we have a street circuit where you can touch the walls easily, and if something happens Verstappen will be there, it’s really, really close and can go both ways.

“I think it’s impossible [to predict], we don’t know, we will see who will manage to cope with the new track, it will be challenging for them.

“Mercedes are taking the strong engine again which they had in Brazil, and if it’s still this engine with so much power, I think it will be difficult for everyone else.”

Together with Pirelli, Tilke explained how his team have devised a circuit that will favour the best strategy and tactics from teams: “We try to make different strategies possible, this is something that we aim for. To provide one more element to the race which makes it interesting so not everyone is picking the same strategy.

“So for example to have quite a short pit entry and exit so you’re not losing so much time when you go in, which makes it possible to make one stop, two stop, even three-stop strategies,” predicts Tilke.

“Tilke Engineers & Architects” was established in 1983 by Herman Tilke, and has been F1’s go-to track designers since then, with completed projects in Abu Dhabi, Baku, Istanbul, Mexico City, Sochi, Circuit of the Americas, Red Bull Ring to name a few

Of the Saudi project, they say on their website: “This year in the north of the city centre of Jeddah, Saudi Arabia, a new, spectacular race track is going to be built. The temporary street circuit runs along the cost of the Red Sea, winding through the lagoon around the famous Floating Mosque.

“With a total length of over six kilometres the Jeddah F1 Street Circuit is the second-longest track on the current Formula 1 racing calendar after Spa-Francorchamps.

“With 27 turns and an average speed of 252 km/h, the track is also one of the most challenging and fastest. Its idyllic location on Jeddah’s waterfront and its extraordinary design promise spectators of the Saudi Arabian Grand Prix spectacular races in front of a breathtaking panorama.

“Temporary grandstands will form three arenas positioned at the northernmost point, in the centre near the start-finish-straight and at the southernmost point of the track. This will give the spectators a marvellous view on racing action.

“A “Royal Overlook” will be available for VVIP guests with a view into the start-finish-straight and the turns in the centre of the track.

“We look forward to an exciting first race weekend on 3rd to 5th December 2021!” After just 8 months, the #JeddahCornicheCircuit is READY FOR ACTION!✅
Who’s excited to see best drivers in the world go racing at the #F1 stc #SaudiArabianGP?! 🏎🇸🇦🤩#OvertakeTheFuture #نسابق_المستقبل pic.twitter.com/OhQXy0qs23