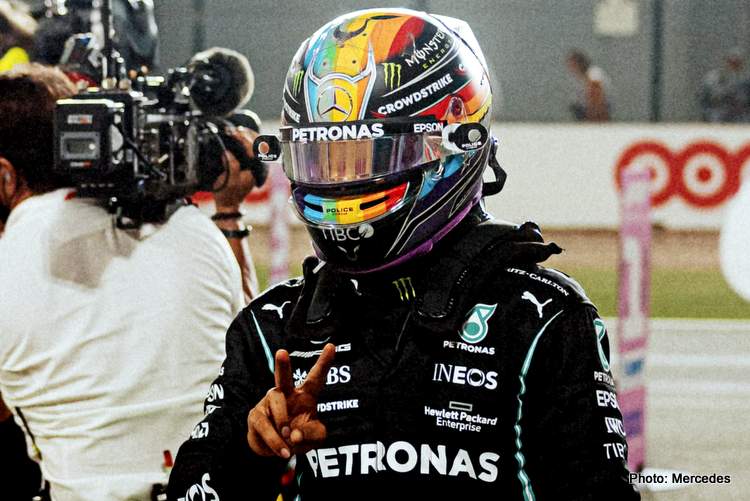 Lewis Hamilton sent a clear message to his rival Max Verstappen after Qualifying for the 2021 Qatar Grand Prix, on how he intends to fight over the last three races of the season, comprehensively beating him to pole.

The Mercedes was clearly the faster car around the Losail International Circuit as Valtteri Bottas showed in the second and third practice sessions, but as usual Hamilton left his best for last and ended up taking pole with a time of 1:20.827.

“Yesterday was a really difficult day for me actually,” Hamilton revealed. “Thursday and Friday I wasn’t feeling too well and so really struggled throughout practice.

“I was just off yesterday so really had to dig deep.”

He went on: “I was here until midnight last night working with the engineers, who also always work so late, they’re such hard workers, and found a lot of areas which I could improve.

“Made a lot of changes for P3 and it seemed to work,” the Briton pointed out. “Then of course you’ve got to carry that through to qualifying, but I’m so grateful for the timings they put us out on track, we didn’t have any traffic.

“Then that last lap was beautiful. It was a really sweet lap,” a clearly satisfied Hamilton declared before adding: “I had a bit of a stomach ache from Wednesday but felt fantastic today.

“I slept well last night so that makes a big difference,” he concluded.

Verstappen had no answer

Despite having a higher downforce rear wing bolted to his car, Verstappen never looked to be good for pole in Qatar, and was only able to split the Mercedes pair at the end of Q3, and was a worrying 0.455s off his title rival’s time.

Starting P2 for tomorrow’s duel in the desert ⚔️ pic.twitter.com/m9ezW5D1gN

Verstappen said right after qualifying: “Just lacking a bit of pace. It’s been just a bit more tricky for us again in qualifying.

“Checo is not even in Q3 so it definitely shows we are struggling a bit more than normal. But nevertheless it’s still second, so it’s all to play for,” he explained.

“But I wish we could have fought for more,” the Red Bull ace lamented.

Valtteri Bottas’ early form around Losail was AWOL in qualifying and will line up third on the grid for tomorrow’s race, over six tenths slower than Hamilton.

The Finn said in the post-qualifying interviews: “I struggled quite a bit, especially in Turn 1.

“Need to have a look but obviously I tried my best, but little bit confused about what happened to the car overnight,” he admitted.

The top three will start the race on the Medium tyres they used to progress from Q2, but Verstappen will have to battle the Mercedes pair without the help of his wingman Sergio Perez who was out of qualifying in Q2.

It was a dramatic end of qualifying for the impressive Pierre Gasly who went hard over the curbs at Turn 15 breaking his front wing and blowing his front right tyre up, but his banker lap meant he was good to keep fourth 0.813s off the pace.

Fernando Alonso was fifth for Alpine, the Spaniard obviously having some handy pace around Losail and was 0.030s off Gasly’s best time.

Lando Norris gave McLaren some reason to cheer as he finished qualifying in sixth place as his teammate Daniel Ricciardo was knocked out from Q2. The Briton was 0.904s off the pole time.

Carlos Sainz made it into Q3 by the skin of his teeth, as he insisted on qualifying on the Medium tyres, and was lucky that the drivers around him did not improve and most notably his teammate Charles Leclerc. He finished qualifying seventh, 1 second off the pace.

Yuki Tsunoda was eighth, making it two AlphaTauri’s in Q3, and over two tenths shy of his teammate’s time.

Esteban Ocon was ninth, making it a good day for Alpine with both cars in the final part of qualifying, but was over three tenths slower than Alonso.

Aston Martin’s Sebastian Vettel made it into the final part of qualifying despite being under the radar over the weekend, but was only good for tenth place.

Formula 1 politics refuse to go away

The main news ahead of qualifying was the announcement that the FIA will be testing all the rear wings after qualifying, seemingly as a response to the questions raised by Red Bull, Christian Horner saying to Sky F1: “The FIA are the ones who can check these things and we’re really delighted to see that they’ve introduced a fact-finding mission here, that after qualifying they’re going to be testing these wings.”

Doing the talking on track! 🖤🔥 pic.twitter.com/1hYrQz6WHo

With Hamilton and Verstappen lining up next to each other on the front row for tomorrow’s race, and the chances of overtaking being slim around Losail except at the DRS zone along the pit-straight, expect to have a intense drag race between title contenders towards Turn 1.

Who will emerge first is anyone’s guess, and with the pair having had their on-track moments this year makes the first lap of the first ever Qatar Grand Prix more interesting.

At the time of writing:

Max Verstappen, Valtteri Bottas, and Carlos Sainz are under investigation for not slowing down under yellow flags, related to Pierre Gasly’s tyre blowout incident, and were summoned to the stewards. 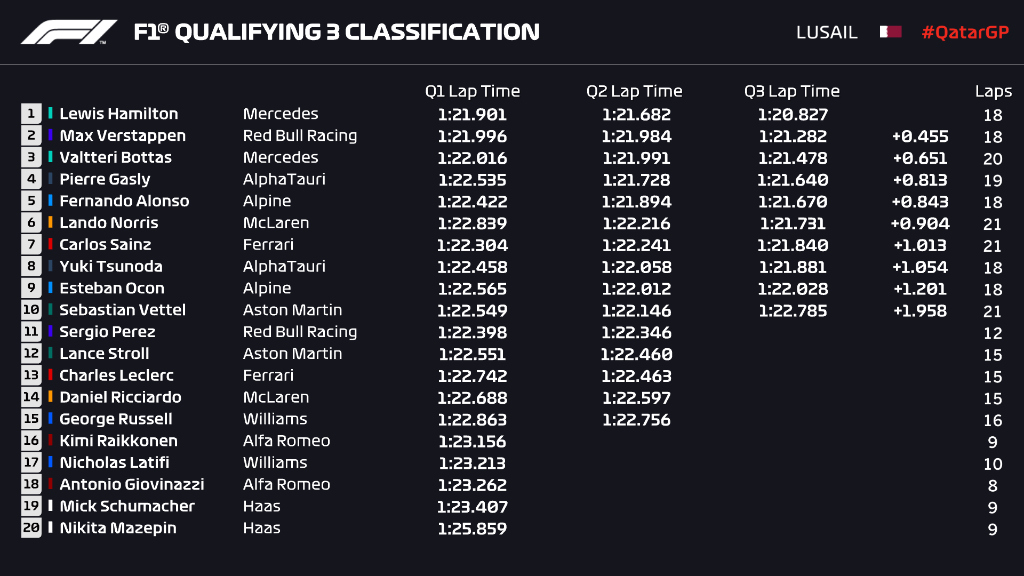 Perez delivered the Q2 shocker, as he failed to make the cut into Q3 by one tenth and could only muster 11th, after a series of strong qualifying performances. This will not do his teammate any favors in Sunday’s race, as he fight the Mercedes pair alone.

The Mexican was followed by Lance Stroll in 12th, and a further tenth behind.

The second shock in Q2 was Leclerc, who was bewildered as to why he didn’t make Q3, and had to settle for 13th, 0.003s behind Stroll, with McLaren’s Ricciardo in 14th, 0.134s slower than the Monegasue.

Despite being promoted into Q2, Goerge Russell was only 15th for Williams. 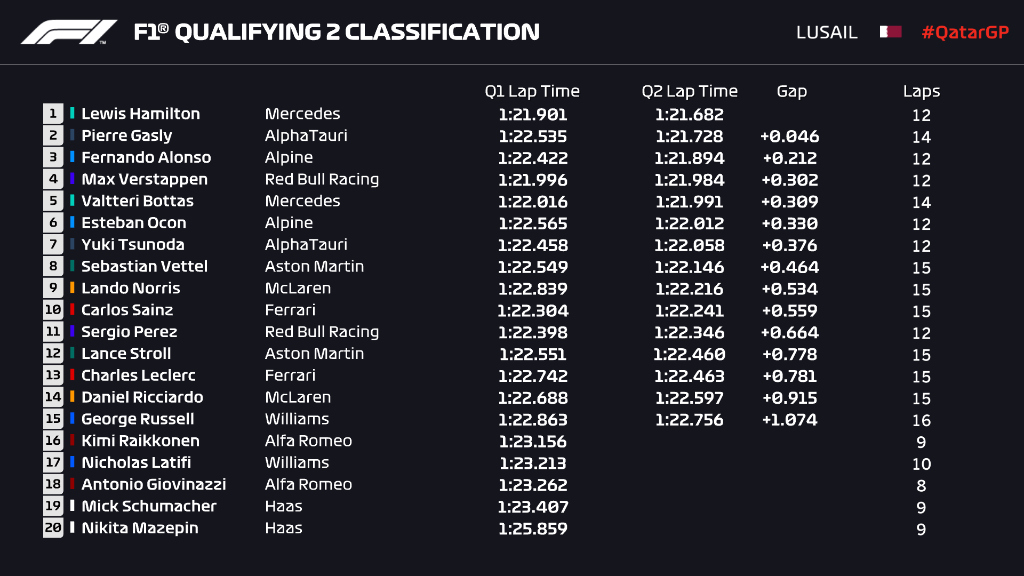 No surprises in the first part of qualifying, with none of the back-markers pulling any surprises, as Kimi Raikkonen was first of the eliminated pack in 16th, followed by Williams’ Nicholas Latifi who unlike his teammate was knocked out in Q1 and will start the race in 17th.

Soon to be unemployed Antonio Giovinazzi was 18th ahead of the Haas pair, Mick Schumacher and Nikita Mazepin – who was able to take part in qualifying after missing FP2 and FP3 –  in 19th and 20th respectively. (Follow me on Twitter @MallakJad) 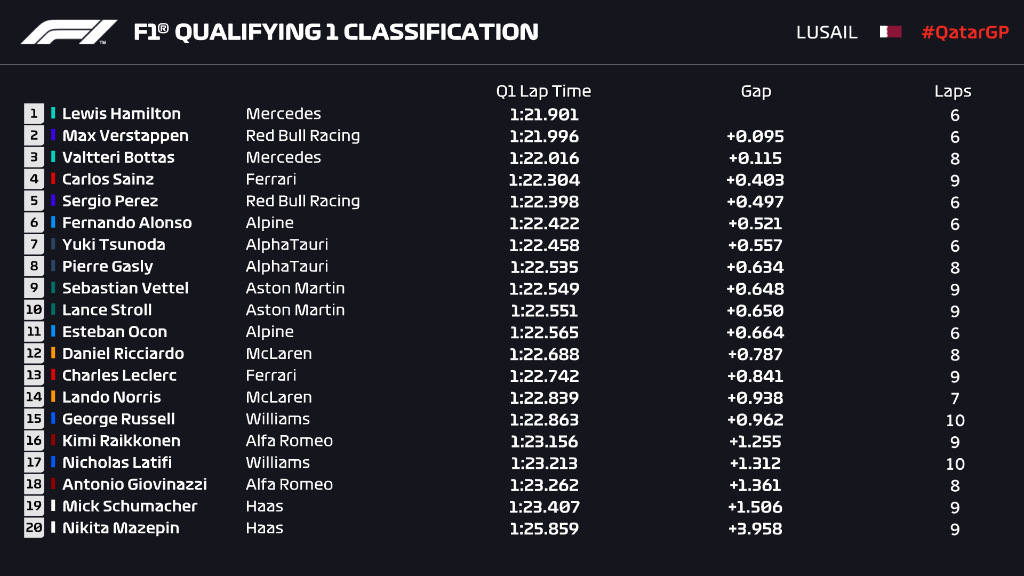