Qatar FP2: Bottas turns it on 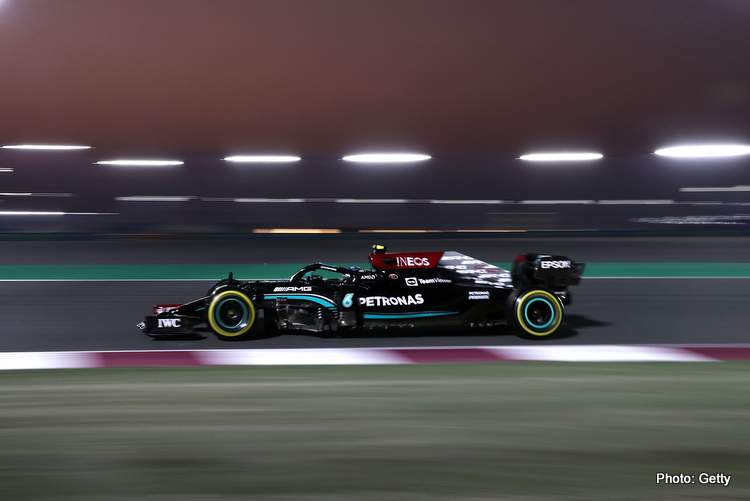 Formula 1 drivers continued their acclimation to Losail International Circuit during FP2, held in cooler conditions after sunset in the Gulf State, with Mercedes’ Valtteri Bottas turning it on to take top spot.

FP2 in Qatar began fresh off the announcement that Mercedes’ request, to review Max Verstappen and Lewis Hamilton’s racing incident in Brazil, was denied on grounds of insignificant new evidence.

The second practice session is more relevant for the teams than FP1, as it is held at the same time of day as qualifying and the race, meaning useful running for the teams under more representative track and ambient temperatures and conditions.

Bottas took over the lead of the proceedings during FP2 and finished the afternoon session first registering a 1:23.148, ahead of AlphaTauri’s Pierre Gasly who seems comfortable in second on Friday in Qatar, replicating his strong from the first practice session, and 0.209s off the Finn’s pace.

After being fastest in FP1, Max Verstappen never looked good for a top spot and had to settle for third, 0.350s off Bottas’ time.

The Dutchman’s title rival Lewis Hamilton was fourth, and also seems unhappy with his W12, as he was over four-tenths of a second slower than his teammate.

Hamilton’s compatriot Lando Norris fared much better in the afternoon session and was fifth fastest, 0.062s behind the seven-time World Champion.

After suffering hydraulic problems with his car in FP1, Aston Martin’s Lance Stroll was sixth fastest, over half a second down on the top time.

Yuki Tsunoda continued his strong form in Qatar and was seventh fastest, 0.030s further down, as Sergio Perez continued to struggle, finishing the session eighth, half a tenth slower than the Japanese rookie and three tenths down on Verstappen.

Both Aston Martins featured in the top ten, as Sebastian Vettel ended FP2 in ninth place, 0.872s off the benchmark time set by Bottas, as Carlos Sainz rounded out the top ten, 0.013s off the German’s time.

Further down the order

The Alpines failed to go as well as they did in FP1, and finished 11th and 12th, with Esteban Ocon leading Fernando Alonso again, albeit by less than a tenth of a second.

Despite their teammates making it to the top ten, Charles Leclerc and Daniel Ricciardo were 13th and 14th respectively separated by 0.040s.

Worth noting that Haas’ Nikita Mazepin did not take part in FP2 as his car required a chassis change. 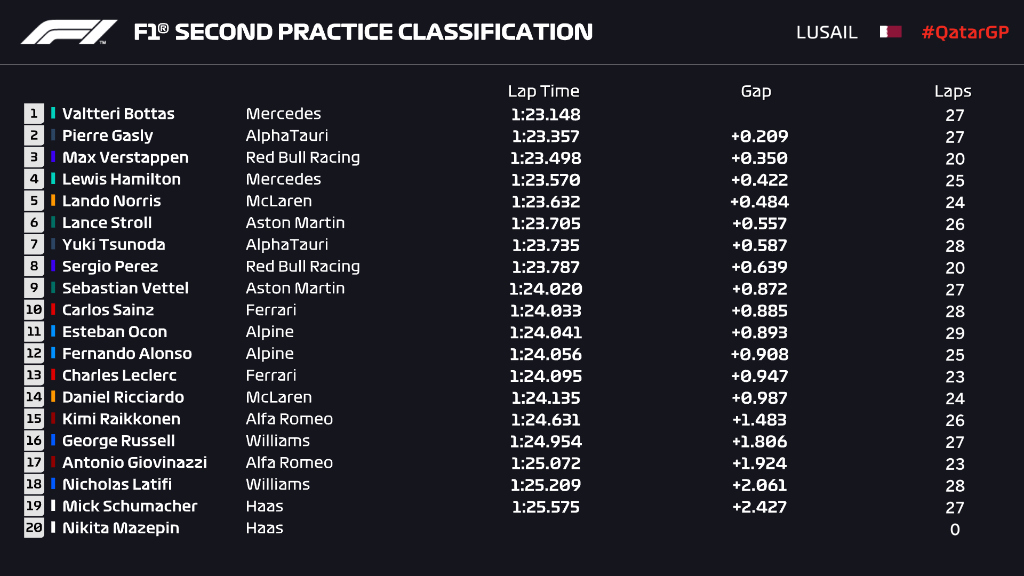