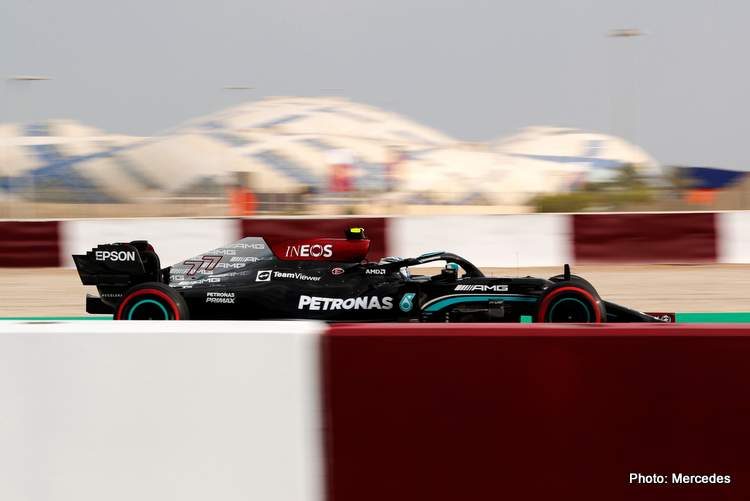 FP3 for the 2021 Formula 1 Qatar Grand Prix began in windy conditions at the Losail International Circuit, with Mercedes flexing their muscles, as Red Bull hit trouble.

It was a troublesome session for Red Bull and their drivers, especially Max Verstappen who spent more time in the team’s garage than on the track, with his mechanics working on the rear wing of his RB16B.

Mercedes on the other hand had a seamless final practice session with both its drivers at the sharp end of the proceedings.

Again it was Bottas who lead in the Mercedes camp, as he ended the final practice session fastest on a 1:22.310 with his seven-time World Champion teammate Lewis Hamilton second, 0.078s slower, hardly a deficit to worry about as the Briton usually pulls a rabbit out of the hat in Q3 of qualifying.

Max Verstappen was third, 0.341s off Bottas’ pace, the Dutchman unable to do any proper running with 9 laps on the board for him, as most of his time was spent with his mechanics working on his “flappy” rear wing.

Up next was Pierre Gasly, seemingly enjoying pounding in the laps around Losail, but half a second off the pace of the leading #77 Mercedes.

Sergio Perez was sixth in the other Red Bull a further 0.011s off the leading pace, as the top five were within a 0.536s gap.

How the rest got on

Carlos Sainz was a solid sixth for Ferrari, albeit 0.738s off the pace, as the improved Fernando Alonso, who briefly featured on the top of the timing screens, finished seventh and over a tenth slower than his younger compatriot.

Esteban Ocon was hot on the heels of his teammate, literally, as the pair were only separated by 0.023s.

Charles Leclerc was ninth in the other SF21, after having quite the moment at Turn 2. He was almost a second slower than the benchmark time, with Yuki Tsunoda rounding off the top ten, with a 1.257s deficit to the top time.

McLaren continued their underwhelming performance in Qatar, as Daniel Ricciardo was 11hth fastest, 1.401s off the leader’s time, with Lando Norris down in 13th almost two tenths slower than his teammate.

The McLaren pair were split by the Aston Martin of Sebastian Vettel in 12th compared to 15th for his teammate Lance Stroll who was almost two seconds slow.

For the second session in a row, Nikita Mazepin did not do any running, with his team asking him to stop his car while still at the pit exit, briefly red flagging the session, as the stricken Haas was recovered. It was later announced that the Russian’s car requiring a new control unit.

Qualifying is up next, two hours after the conclusion of the third practice session, with it being hard to bet against the Mercedes pair locking out the front row on the grid come the end of Q3. (Follow me on Twitter @MallakJad) 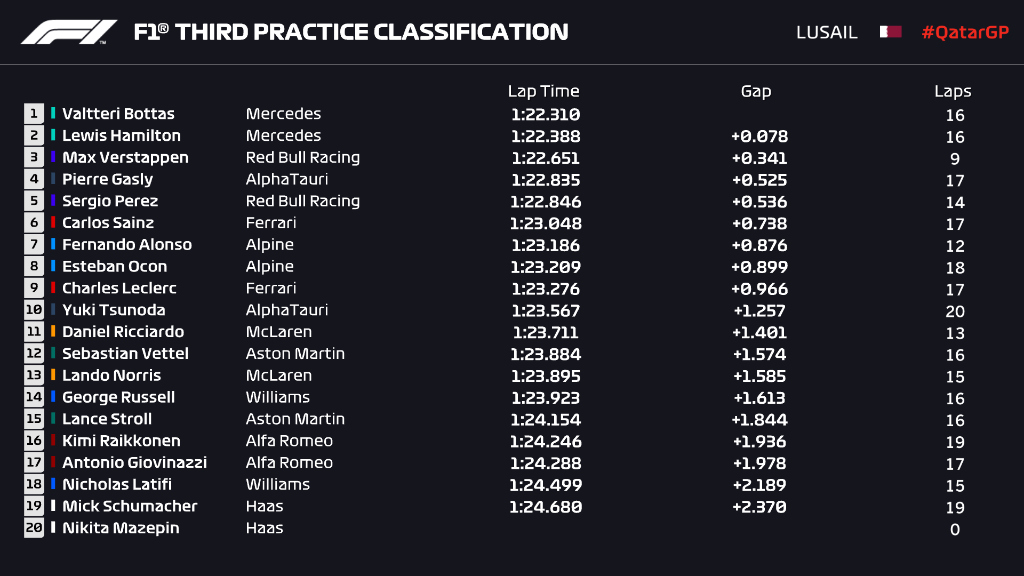