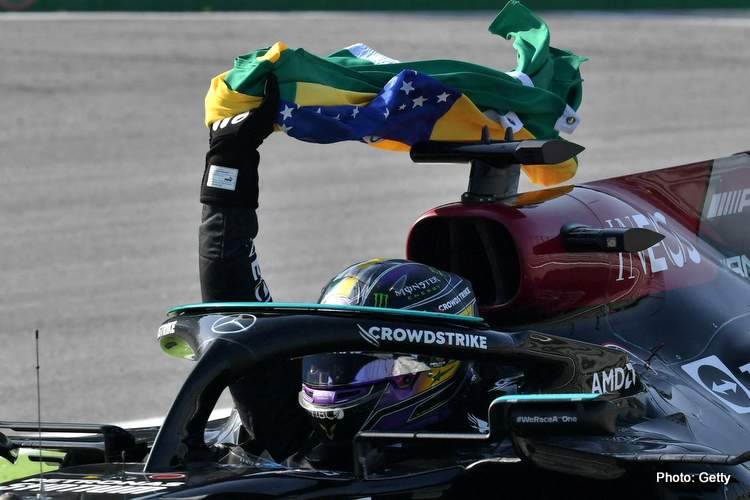 With no Brazilian drivers on the Formula 1 starting grid at Interlagos, local fans have to choose among foreigners and Mercedes seven times world champion Lewis Hamilton is getting plenty of love.

“Hamilton is coming for you,” a Brazilian fan shouted to Red Bull’s Max Verstappen from a footbridge over the paddock on Saturday as the Formula 1 championship leader was being interviewed by television channels after the sprint race.

Hamilton won his first title at Interlagos with McLaren in 2008, beating Ferrari’s then local favourite Felipe Massa with a devastating overtake at the last corner of the last lap of the final round of the season.

Massa retired in 2017, since when there has been no Brazilian competing regularly. The last was U.S.-born Pietro Fittipaldi as a stand-in last season at Haas following Romain Grosjean’s fiery crash in Bahrain.

Hamilton has won over the crowd since 2008 with his praise of the country and his connection to late triple world champion and local hero Ayrton Senna, who died at Imola in 1994 and was his boyhood idol.

In one of them, he wrote that “this country and its fans possess an energy like no other,” while another consisted of a montage of him next to Senna, whom he called “my greatest inspiration”.

“Senna has always been his idol… every time Lewis comes to Brazil, he brings a special homage,” said Anderson Cardoso, a Hamilton supporter attending the grand prix. This year he again is wearing a helmet with the late Brazilian legend’s colours; it’s not the first time.

Cardoso said he still missed having a Brazilian driver to support at the sole race in South America and in a country that gave the sport multiple world champions Senna, Nelson Piquet and Emerson Fittipaldi.

As for Brazilian drivers in the top flight… Will there ever be another one?

“I hope, of course,” Massa told Reuters. “Given Brazil’s tradition in motor racing, it is sad not to have a Brazilian driver carrying our flag out there”.

“I think a great part of the Brazilians hope that he will be able to turn around this championship,” added Everton da Silva, also a Hamilton fan, referring to the Briton’s current standing.

Hamilton started the Sao Paulo Grand Prix in 10th place following a five-place grid penalty, after racing from last to fifth in Saturday’s sprint and with the crowd standing and cheering his progress.

Further winning their hearts and minds with a virtuoso drive, perhaps his best ever in F1, which ended in a thrilling victory and, importantly, reduced the gap to Max Verstappen in the standings to 14 points with three rounds remaining. (Reporting by Gabriel Araujo)