Seidl: Brazil is our chance to bounce straight back 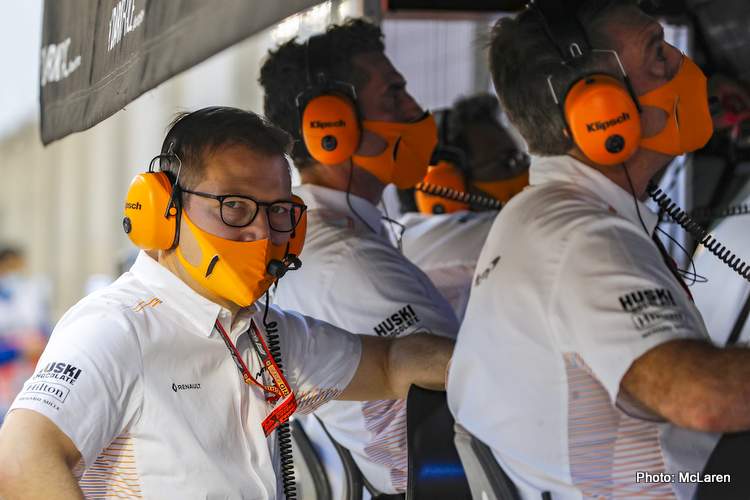 McLaren F1 boss Andreas Seidl wants to see his team bounce back at this weekend’s Brazilian Grand Prix after a well below par weekend in Mexico.

Much can be written about Daniel Ricciardo’s shenanigans and Lando Norris’ slog to a single point, while Ferrari – fellow contenders for third in the 2021 F1 constructors’ championship – claimed third place as both their drivers finished in the points, Charles Leclerc in fifth and Carlos Sainz sixth.

Hence the Reds are now 13.5 points ahead of their Woking rivals with four rounds remaining, prior to Sunday’s race McLaren led Ferrari by 3.5 – the damage done at Autodromo Hermanos Rodriguez was formidable and suggests a change in the pecking order.

But heading to Sao Paulo, Seidl is optimistic: “We head to Brazil this week with the chance to bounce straight back from our result in Mexico. It’s great to be returning to the Autódromo José Carlos Pace in São Paulo after two years.

“The track is one of the most historic on the Formula 1 calendar. Our last visit to Brazil holds fond memories for the team as we secured our first podium since 2014,” said Seidl, referring to Carlos Sainz (now at Ferrari) finishing third for the team in 2019.

“However, it’s important we continue to stay focused during this intense triple-header and deliver to the best of our abilities to score good points. The circuit is not without its challenges with a high altitude similar to Mexico, constant elevation changes and unpredictable weather that will make things interesting.

“We’re looking forward to using the sprint qualifying format this weekend for the third and final time this season. The new format has provided excitement on the track for the fans while presenting teams with more opportunities from the very start of the weekend.

“The aim will be to find a good level of consistency with both cars from the first session to achieve the best result possible,” explained Seidl.

Ricciardo, whose race was compromised in Mexico when he triggered a first turn melee that forced an early pitstop and irrelevance thereafter, will nevertheless take the positives to Interlagos: “I’m looking forward to heading back to Brazil for another sprint weekend, these weekends have been kind to us so far this year, so we’ll head into the weekend with positivity.

“After the result last weekend, where we had a disappointing result, we can only really look forward. Luckily we have the opportunity to fight back almost immediately with this triple-header of races.

“I didn’t take home any points in Mexico, but the outcome could’ve been very different if we’d just had a few more centimetres, which proves we have the car to fight for good positions and decent points.

“There’s definitely some optimism coming off the back of last weekend. My focus is now on scoring points in a few days’ time, so we’ll keep at it. The team is hungry, determined and we’ll keep on going right to the final lap of the season,” added Ricciardo.

Four podiums for this year including a fine second place at Monza are becoming distant memories for Norris. He never found the sweetspot at a venue that clearly did not suit the McLaren.

Ahead of Brazil, Norris said in the team preview: “Hopefully we can take our learnings from Mexico into this weekend and improve as a team. We’ve got four more races left on the calendar so every session counts.”

“I’m excited to be racing in Brazil after missing out last year because of the pandemic. Interlagos is an iconic circuit with a rich history in F1. The atmosphere there is unique thanks to the passionate fans that make it a fun place to race.

“Sprint qualifying has shown that there are plenty of opportunities to make good progress across the weekend. We need to keep our heads down and hit the ground running on Friday,” added Norris.