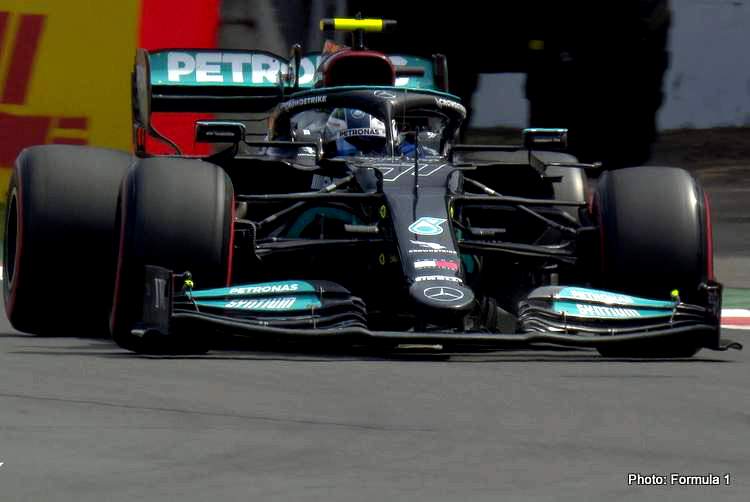 FP1 signalled the start of the 2021 Mexican Grand Prix, the first of the final five races this season and although Mercedes started strong in Mexico, Max Verstappen was not far behind ready to pounce.

After Red Bull and Verstappen’s dominance in Austin, at a supposedly Mercedes-friendly circuit, a fortnight ago, the Formula 1 circus arrived in Mexico, historically a Red Bull-favoring venue.

With historical patterns rendered pointless in this most extraordinary of seasons, one would be right to wonder which of the title contenders will fare well at the Autódromo Hermanos Rodríguez.

Valtteri Bottas showed again that he enjoys grip-less track conditions and ended the first session on top with a time of 1:18.341, with teammate Lewis Hamilton a close second 0.076s behind.

Hamilton had a moment early on in the session as he locked his front tyres at Turn 1, and was asked to report to the stewards after the session for seemingly rejoining the track in an unsafe manner.

Championship leader Verstappen who was touted as the favourite this weekend was third 0.123s off the leader’s pace and 0.047s off Hamilton’s. The chances are though that there is more speed in the Dutchman’s RB16B.

Not an ideal start of the weekend for local hero Sergio Perez who spun at Turn 16, a little over 10 minutes into the session, irreparably damaging his rear wing, and got stuck in the garage for repairs before emerging back on track with 22 minutes remaining after a mega repair job from Red Bull and recovered to finish the session fourth and only 0.269s off Bottas’ time.

AlphaTauri’s on-form Pierre Gasly, was punching over his weight as usual, and put in a solid time of 1:18.985, good enough for fifth. His teammate Yuki Tsunoda, who will start from the back of the grid for taking a new power unit, was 11th with a time of 1:20.011.

Carlos Sainz who earlier lamented the lack of personal good results in Mexico, may well be on his way to a good result, as he ended the first practice session in sixth place 1.122s off the pace.

Double World Champion Fernando Alonso was a strong seventh for Alpine with a time of 1:19.656.

With the track surface being extremely dusty, Perez was not the only driver to spin, as Ferrari’s Charles Leclerc spun at the same place as the Mexican moments earlier also damaging his rear wing.

The Monegasque was relegated to his team garage for repairs as well and was back on track with under 20 minutes of track time available, but did well to finish the session eighth and 1.326s off the benchmark time.

Both Charles Leclerc and Sergio Perez slide backwards into the barrier and pick up some rear wing damage 😱#MexicoGP 🇲🇽 #F1 pic.twitter.com/ZM4Jzi5F1D

Esteban Ocon joined his teammate in the top ten and was ninth, one tenth off the time of the sister Alpine.

Aston Martin’s Sebastian Vettel rounded up the top ten, 1.517s off the pace in FP1.

Vettel’s teammate, Canadian Lance Stroll will join Tsunoda at the back of the grid on race day for taking new power unit components. He finished the session in 13th place.

Notably, the McLaren duo, Daniel Ricciardo and Lando Norris did not feature in the top 10, finishing 14th and 15th respectively. Not a good sign for the Woking-based outfit who are facing a tough challenge from Ferrari for third in the Constructors’ Standings. (Follow me on Twitter @MallakJad) 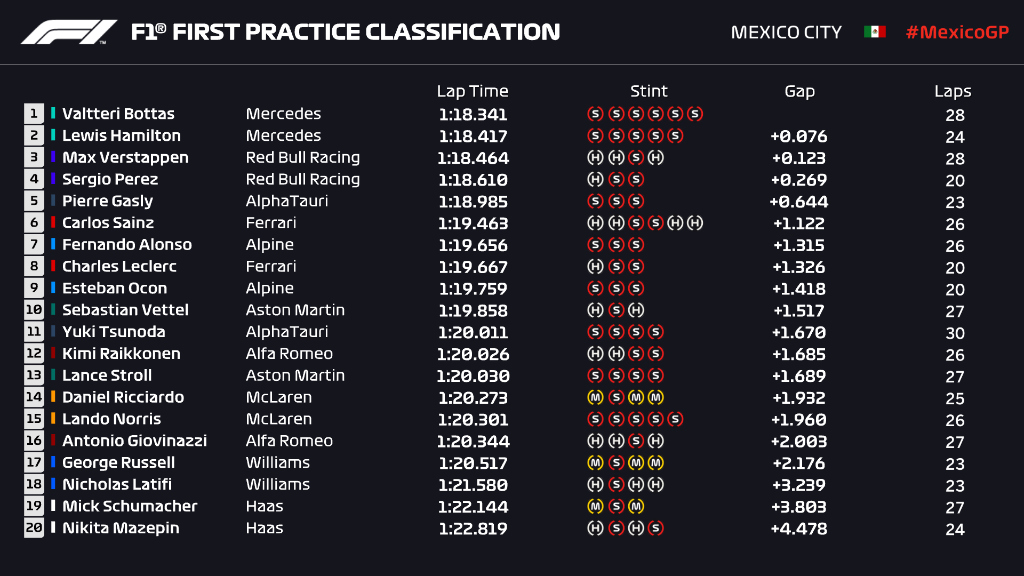