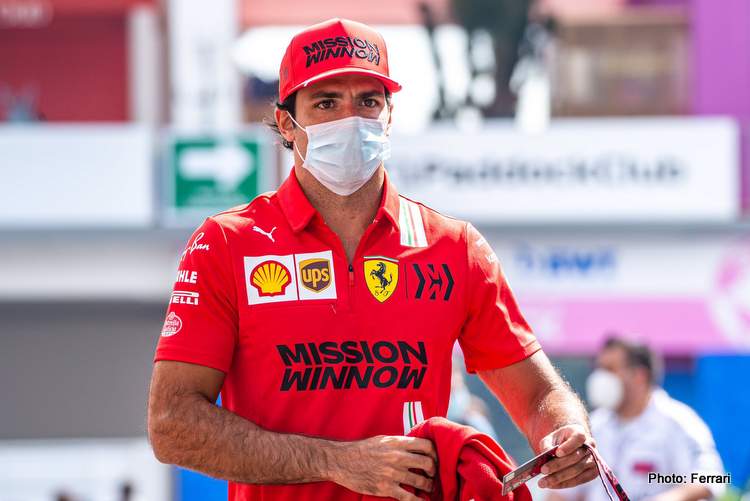 Carlos Sainz is adamant to secure a good result at the 2021 Formula 1 Mexican Grand Prix despite admitting that Mexico never delivered good results for him.

One can’t blame the Spaniard for feeling that the Autódromo Hermanos Rodríguez has not been kind to him over the years, as a quick look at his record there, shows that after racing at the Mexican venue five times, all he got for his efforts were a couple of DNF’s, a couple of 13-place finishes, and a 16th place in 2016. Not a sterling record!

However, Sainz is not losing his motivation, and is looking to have a turn of fortunes this year while driving for Ferrari, which he mentioned in his team’s race preview.

“I did not go back to Europe after the United States GP and I spent a few days relaxing and recharging my batteries to be as well prepared as possible for the final part of the season,” he declared.

“This track has never delivered any good results for me and we know how demanding it is on the cars,” Sainz lamented, but is invigorated by the close fight his team is having with McLaren, for third in the Constructors’ Championship.

“However, I am optimistic about how competitive we can be up against our closest rivals. The battle with McLaren for third place is important, mainly symbolically.

“It is a useful exercise for when we will be fighting for the top,” the 27-year-old said with his eye on the future.

“We are making good progress, which has been confirmed by the fact that every update we have introduced over the course of this season has worked as expected.

“We will do our utmost right to the very end to give the fans what they want and if we can continue to perform as we have done so far, I think that we can achieve our goal of finishing third,” Sainz concluded.

His teammate Charles Leclerc had some nicer things to say in the team’s press release, about the upcoming Mexican race.

“This is one of my favourite circuits,” he admitted. “Because even though you run maximum aero downforce there’s never much grip, so the driver can make the difference.

“Having said that, I expect the two teams fighting for the title will be out of our reach, but I think we will be competitive against our closest rivals, as indeed was the case two weeks ago in Austin,” Leclerc said in reference to his team’s ongoing scrap with McLaren for third.

“On paper, this track should be even more suited to our car than the last one, although before saying too much, it’s best to wait until we have been out on track,” the Monegasque said confidently, albeit with caution.

The Ferrari star is enjoying the attention of the Mexican crowds attending the race this weekend, despite their adulations being directed towards one driver only.

“I think they’re amazing, even if of course they support Checo Perez,” he said. “But they are very sporting and especially noisy: I reckon the Drivers’ Parade here is the best of the year, because when you get to the stadium the fans seem to be really right next to you!

“It’s a wonderful feeling and it continues during the formation lap when you can still hear them, even wearing a helmet and with the noise of the engines,” the 24-year-old concluded.

Leclerc and Sainz are sixth and seventh respectively in the Drivers’ Championship separated by 5.5 points only, and will be banking on the track’s suitability to their SF21 in order to close the Scuderia’s 3.5 points gap to McLaren and maybe even overtake the Woking squad in the standings.