Mercedes: progress will be tough for Lewis 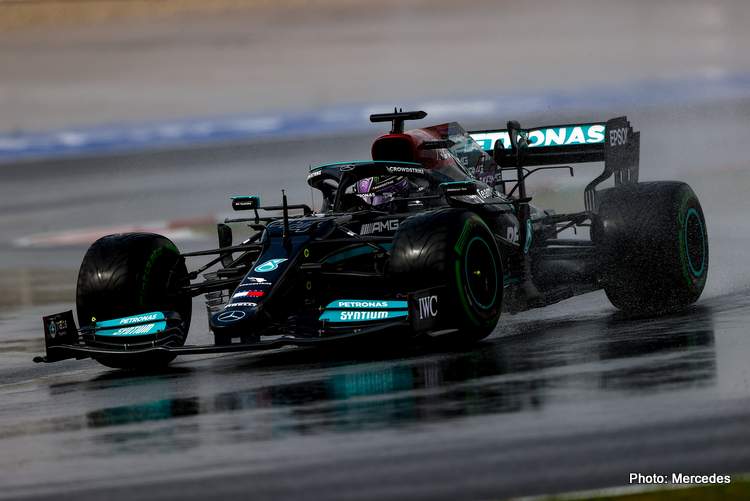 Mercedes team boss Toto Wolff thinks progress will be tough for Lewis Hamilton from 11th on the grid, but has full faith in his star driver’s ability to turn things in his favor.

Mercedes have decided to give Lewis Hamilton a new engine for the Turkish Grand Prix, with a 10-place grid drop on the cards for the seven-time world champion.

Looking at the team’s qualifying performance on Saturday, that decision seems to have been and inspired one, as the team’s W12 has been in its element at Istanbul Park, with both Hamilton and Valtteri Bottas capitalizing on that, achieving a one-two in qualifying, which will turn to a pole start for Bottas as Hamilton’s is relegated to 11th.

With Bottas holding the fort up front and the car’s blistering pace, Hamilton is best placed to fight back up the grid in damage control mode, despite the team going out of their way to state otherwise.

Speaking in the Team statement post qualifying, Wolff acknowledged the positives in the situation but was also wary of the challenges the race will present.

“The big positive today is that the car is very quick and Valtteri starts on pole tomorrow, but the negative is that it would have otherwise been a weekend with a front-row lockout for the team,” he said.

But warned: “Progress will be tough for Lewis with all cars in front of him other than Tsunoda starting on the Medium tyre and yesterday in the long-run we could see that it’s difficult to follow here.

“But Lewis has made phenomenal recovery drives time and time again, and there’s no one else you’d want in the car. Strategy will play a big part and we’ll be there to support him,” Wolff went on expressing full faith in Hamilton, before sparing a thought to his other driver: “Valtteri has been strong all weekend and he has got a great opportunity tomorrow.

“He clearly wants the win and it will also help Lewis so he’ll be going all-out for it,” the Austrian concluded.

Hamilton on the other hand seemed to be enjoying his 2021 Turkish experience, and reflected on his qualifying.

“It’s so good to be back in Turkey,” he said in the team statement, “last year was an unbelievable visit here for myself and the Team! Coming back, the track is completely different – the grip level we’ve got now is absolutely awesome.

“The session today was really tricky because there were still some damp patches and getting temperature into the tyres for the first lap wasn’t easy. But it was a really, really great job by the Team, they got us out at the right time and put in a great performance.”

“We’ve got the long straight down the back so we’ll see what we can do. Hopefully we can give the fans here a good race!”

Bottas, on the other hand, had a teammate’s back in qualifying. He wasn’t faster yet fast enough to keep a chasing Max Verstappen in check, and thus inheriting Hamilton’s top spot on tomorrow’s starting grid.

Bottas reflected: “Today was a good Quali – not easy conditions, especially in Q1 which was on the edge with the damp parts and still in Q3 there were damp sections but I put together some good laps!

“On the final lap, I missed a little in the last sector with some understeer but other than that, the lap was really nice. I enjoyed it and obviously as a team result, today was pretty ideal.

“Max is starting next to me and the Ferrari has looked strong this weekend, so it’ll be a tough race but we’ll give it our all,” the Finn warned. “We have a good race car, I just need to keep the focus on my own race, avoid mistakes and stay ahead.

“Strategy will always play a part but I’m feeling confident and looking forward to the start and getting the job done,” he insisted confidently.

Bottas has said before that he would play the team game and support Hamilton should he need that. That makes what the Finn said just after qualifying – adrenaline still pumping – that he will “focus on his own race” quite interesting. But not many will be betting against the team giving the order and the driver complying when push comes to shove.

Lewis Hamilton currently leads Max Verstappen the Formula 1 Drivers’ Championship by two points, and looks to keep the status quo when the checkered flag is waved by the end of tomorrow’s race in Istanbul.