Stroll: New factory shows our intent to be a winning force 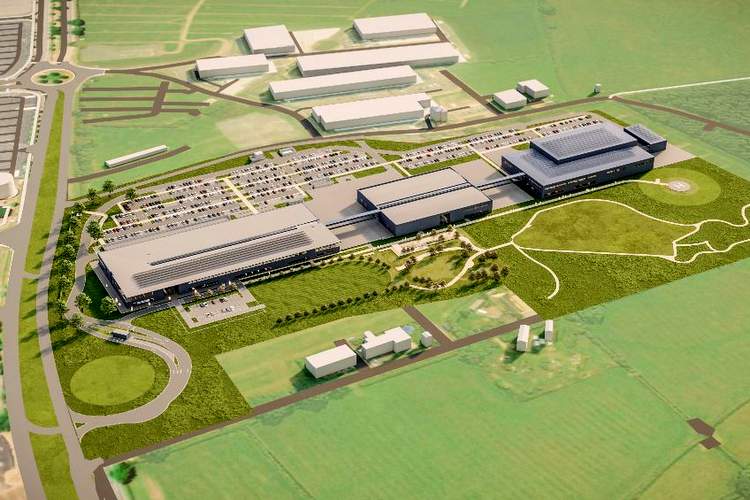 Lawrence Stroll’s Formula 1 dream continues to grow and dazzle, now with news that the Aston Martin F1 operation is scheduled to move into a state-of-the-art ‘smart factory‘ across the road from Silverstone by the end of next year.

What began as a vanity project for Lawrence to get his son Lance a ride in F1, starting as a pay driver with Williams, then to team ownership when they saved Force India from oblivion to start Racing Point which, in turn, has morphed into the grandiose Aston Martin project.

This is what they have to say of their the team’s new crib:

Construction of Aston Martin Cognizant Formula One Team’s brand-new buildings (a new factory and a new wind tunnel) in Northamptonshire has begun and a ceremonial breaking-ground ceremony has taken place on the new plot.

Aston Martin Executive Chairman Lawrence Stroll and JCB Chairman Lord Bamford both attended the ceremony, which marks the official start of an 18-month construction and installation phase for a new headquarters for the Formula One team, which has been designed by Ridge and Partners LLP and project-managed by Ridge, construction consultancy Gardiner & Theobald, and the team’s own in-house resource.

The 400,000 square feet (37,000m2) buildings will become the new home of the Aston Martin Cognizant Formula One team, which has outgrown its existing facilities and will rapidly grow its current headcount by the expected completion date of late 2022 or early 2023.

The new three-unit factory will be constructed on land across the road from the historic Silverstone Grand Prix Circuit: one building will house the team’s design, manufacturing and marketing resource; a second will be occupied by the brand-new wind tunnel; and the third will redevelop and repurpose the existing factory premises as a central hub featuring staff amenities and a logistics centre.

A serious statement of intent

The construction of a brand-new headquarters is a significant cultural landmark for the sport – it marks the first all-new factory in F1 in the UK for 17 years, the most recent being the McLaren Technology Centre, in Woking, which was officially opened in 2004.

As such, it is a serious indicator of the scale of the ambition of the team’s Executive Chairman Lawrence Stroll, who is developing, expanding and upgrading every facet of the organisation in a quest for World Championship-winning performance.

For the first time, the new factory will house every manufacturing resource within a single campus – the team currently operates from several discrete buildings, with additional work outsourced externally.

In addition to the upgrade and expansion of facilities and machinery, the new factory will be complemented by a brand-new wind tunnel and a brand-new Formula One simulator.

The new tunnel will use the latest steel-belt rolling-road system, and a state-of-the-art flow-imaging section area. For the first time in the team’s history, the site will incorporate the wind tunnel, model support and production facilities – a move that will bring significant development-rate benefits.

The commissioning of the wind tunnel is due to start in Q3 2023.

Recruitment: people at the heart of growth plan

Development of the new site is also coupled with an ambitious recruitment drive. Aston Martin Cognizant Formula One Team has already made several notable technical appointments in the past few months and is continuing actively to recruit across every level of the organisation.

Many of the new roles will be filled by experienced experts already working within the motorsport sector, but others will be open to local talent within the neighbouring community.

As a new build, the Aston Martin Cognizant Formula One Team Factory will be the first Formula One facility to benefit from the full installation of smart factory intelligent systems.

In concert with partners Cognizant, NetApp and Sentinel One, the new factory has been designed from the ground-up to be a wireless, adaptive, streamlined facility – one whose information streams, monitoring systems and manufacturing processes are tied together via data in the cloud.

The support of the team’s key technical partners both underlines their commitment to the organisation and also the validity of the solutions they provide.

Smart factory tech gives the new building the ability constantly to adapt to the cyclical manufacturing processes of a Formula One team, and will provide significant economies of scale and function as the team expands its production presence.

Lawrence Stroll, Executive Chairman, Aston Martin Cognizant Formula One Team, said: “It is inspiring to look at where we are now in the context of the architectural and organisational challenges and ambitions that lie ahead.

“Our new buildings reflect not only the scope of our determination to become a World Championship-winning force, but also the scale of our growth and development as an organisation.

“I feel strongly that any building is a powerful representation of the people who work within it, and I am thrilled that we are creating a new home in which people can work, collaborate, create and win together.

“It is exciting to think that the entire team will be in its new home by the end of 2022 or the start of 2023, and I would like to take this opportunity to thank all our partners who are working on the project, especially JCB and Cognizant.”

Lord Bamford, Chairman, JCB, said: “This ambitious project firmly positions the new team headquarters on the Formula One landscape and provides a fantastic home and working environment for a group of extraordinarily talented and motivated men and women.

“I am inspired by Lawrence’s compelling vision for the team. It is an ambition we wholeheartedly share: to build a better industrial future for our country.”

Otmar Szafnauer, Aston Martin Cognizant CEO and Team Principal, said: “Our existing Silverstone factory is a little piece of Formula One history – but, as an organisation, we have outgrown it. What is more, we will require even more space as we continue to build our headcount over the next few years.

“We are indebted to the local council for their help and understanding throughout the design and consultation phase; we feel like we are creating a landmark that will express and enhance the values and investment that have made the Silverstone Technology Park and Motorsport Valley essential locations for the British technology industry.”

Brian Humphries, Cognizant Chief Executive Officer, said: “Aston Martin is everything you want in a partner – visionary, innovative, customer-centric, focused and fast-moving. We are thoroughly enjoying our partnership because the work is cutting-edge, we get to leverage the full suite of our digital solutions, and the results become quickly visible.

“It is exciting to be part of the new Aston Martin factory design. By bringing to bear Lawrence’s compelling vision and Cognizant’s digital capabilities, Aston Martin’s infrastructure is evolving into a smart factory that will help the team become one of the most respected and successful names in Formula One.

“The inauguration of Aston Martin’s fit-for-purpose factory and wind tunnel sets in motion a transformative journey that leverages the best of both companies’ knowledge, experience and expertise. It also reflects the determination and confidence of our two organisations as we fulfil the promise of this deep and mutually beneficial partnership.

“Once complete, the new Aston Martin Cognizant buildings will represent the state-of-the-art in Formula One and offer an empowering place in which to work, design, manufacture, collaborate and win.”