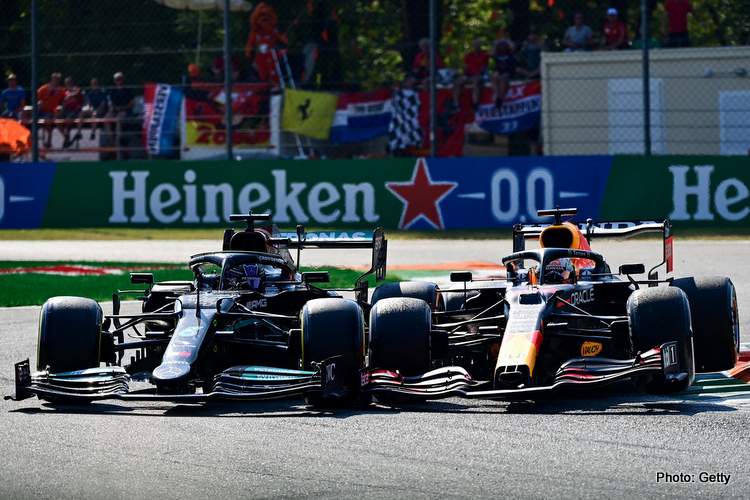 Mercedes boss Toto Wolff described the crash between Lewis Hamilton and Max Verstappen during the 2021 Italian Grand Prix as a “tactical foul”, while Red Bull boss Christian Horner says it was a “racing incident.”

Hamilton versus Verstappen got nasty at Silverstone in July when the pair collided. On Sunday at Monza, it got nastier and might have even occurred earlier in the race when Hamilton attempted a move on his rival into the second Variante on the first lap.

The Mercedes had a stab at the Red Bull on the outside of the entry into the tight complex, aka no man’s land, the black car forced to go over the nasty off-track bumps before rejoining. It was a clumsy move with shades of Imola T1 overeagerness from the World Champ.

They both survived that one, Hamilton very lucky not to suffer damage after his excursion.

The real contact moment came as the Mercedes rejoined the race side-by-side with Verstappen as they hurtled into the tricky, one race line, first Variante where two into one does not go; the Red Bull clipped the high kerb and was pitched into the air and over the top Hamilton’s halo.

It was all relatively slow but potentially very nasty.

After the race, FIA stewards deemed Verstappen was responsible and penalised him three places for the next race at Sochi. In retrospect, perhaps the Dutch driver should have backed off, tucked in behind his rival and go for it later, it was only half distance and a long way to go in the race.

But as they say in motorsport, “If there is a gap you must go for it” which is exactly what Verstappen did and, of course, we know what happened.

Speaking afterwards to TV reporters, Wolff gave his perspective suggesting Verstappen made a calculated choice: “I would say, in football you call it a tactical foul. He probably knew that if Lewis stays ahead, that is the race win possibly. It was clear to Max in there that it would end up in a crash.

“I think if we don’t manage this in the right way – and I’m sure the stewards will look at it in the right way – it’s going to continue. We’ve had a high-speed crash in Silverstone, we’ve had one car ending up on top of the other on Lewis’ head here. How far can we go? Maybe next we have a high-speed crash and land on each other,” concluded Wolff.

Horner, when informed of the comments, took exception: “I’m disappointed Toto would say it would be a professional foul. I think it’s a racing incident and thankfully no one was injured.”

Facts are Red Bull were their own worst enemies on Sunday, with Verstappen running a strong second before his first pitstops, and crucially about a dozen seconds ahead of Hamilton, who messed up his start and was playing catch up.

That pitstop proved to be costly and the trigger of what was to come. It took 11 or so seconds before Max was released by the normally on point Red Bull crew. It for sure would have cost them the race win had their driver continued but worse was to come.

After Lewis pitted, the Mercedes emerged from the end of the pitlane side-by-side with the Red Bull… the rest, as they say, is history.

Speaking after the race, Horner acknowledged: “First of all, we shouldn’t have been in that position because we had a poor pit stop but Max had the momentum, he had enough space around. I think Lewis gave him enough around the run in to Turn 1 and our opinion would be that Lewis perhaps closed him too much into Turn 2.

“You can see Max has the momentum into Turn 1, Lewis gives him enough space there, Max alongside, and then obviously an incident. I think [Max] earned enough to be given a bit more space to work with on the left there. You can probably argue it from both sides, but if you’re taking the middle ground with it, you’d call it a racing incident,” stated Horner.

The only one thing the feuding F1 team bosses agreed on, was how important the halo – which became part of F1 in 2018 – was on Sunday.

Horner said: “The most important thing today is the halo has done its job. It’s an awkward accident with him coming down effectively on top of the Mercedes and thankfully no one was hurt.”

Wolff added: The halo was fantastic. If you see the car, the whole thing is damaged over the halo and the wheel was on Lewis’ head.”

After a dramatic 14th Round of the 2021 championship, the scores are:

Reviewing the replays countless times, one can conclude that the reality is the accident might have been far worse, perhaps, even deadly as Lewis Hamilton suggested, the halo saved his life.

It is accepted that Lewis and Max are the standout drivers of this era, the 36-year-old King of F1 seeking his eighth title, the 23-year-old impatient Prince gunning for his first world championship crown, the problem is they both seem to suffer red mist moments when in close contention.

And, that’s been the story of this season.

More than ever before, Verstappen has a car capable of matching Mercedes every race weekend. The margins are slim, the slight advantages shift from camp to camp and race-by-race, thus the two superstars and title rivals, are closer than ever, on track, inevitable resulting in bent metal.

Who can dictate to two of the best race drivers on the planet how they should go about their racing? They will nod, pretend and/or make all the right noises but, nevertheless, carry on doing their own thing, their own way. That’s how race drivers are wired.

If Lewis and Max can’t sort it out between themselves, far away from the madding crowd, there will be more such incidents in the eight planned rounds that remain, that’s racing.

Lewis and Max on *that* collision 🗣🗣 #ItalianGP 🇮🇹 #F1 pic.twitter.com/Pc6Gh0H5BH