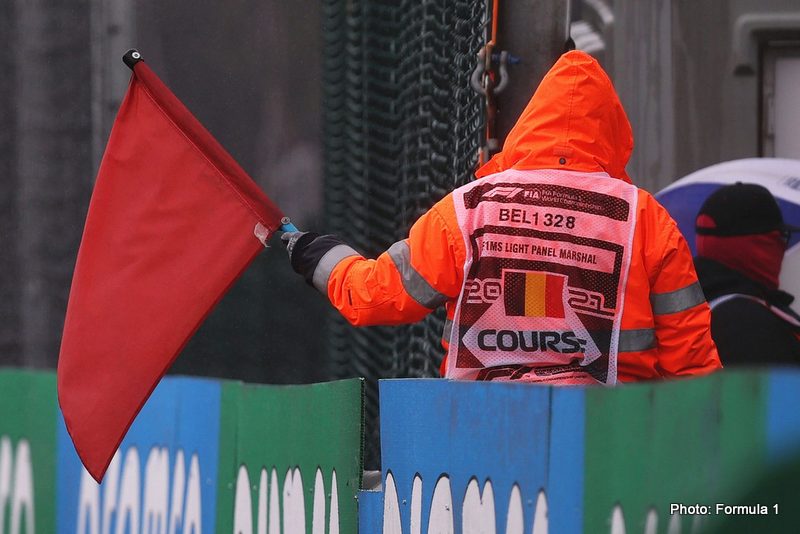 Everyone was itching for racing to resume at the Belgian Grand Prix as they awaited the next chapter in the Max Verstappen-Lewis Hamilton duel.

Summer break is always a tough time for Formula 1 fans. It is even harder this year as we are witnessing one of the most exciting F1 seasons ever contested for a while now.

Our appreciation goes out to all the people working in F1, and their right for a well earned summer break is beyond any discussion considering the time they spend away from their families, and the long hours they put in a hectic, high pressure, and high stakes environment.

But that doesn’t make the wait for us fans any easier especially with the dramas of Hungary and Silverstone still fresh in our minds. But all was good, right? Spa was the first race after the break, and there is no better place than this historical circuit to deliver the next showdown between the title contenders. Well that’s what we thought and we were dead wrong.

The weather however begged to differ. And although the precarious Ardennes weather served us with a thrilling qualifying session on Saturday, it went the extra mile on Sunday and we ended up with a two lap-race behind the safety car! Or was it four laps? Or… well who knows, and most importantly who cares!! It was a surely a joke of an event and that’s trying to keep things civil!

Even though they handed out points (half the usual) and had a podium celebration, it was no grand prix, and although it’ll be tough, we shall nevertheless try to have our usual five takeaways from the Belgian Grand Prix weekend as a whole.

In these conditions, the late Charlie Whiting is sorely missed

This is not the first time we missed the presence of the late race director Charlie Whiting, with the FIA and the stewards coming under scrutiny several times this year due to inconsistency and questionable decisions. In Belgium they didn’t do themselves any favours, as they were indecisive and hesitant at best, not to mention their embarrassing radio exchange with Red Bull regarding Sergio Perez’s permission to race!

We cannot accurately apportion the blame in Lando Norris’ crash during Q3 between driver error and FIA’s lack of decision to red flag the session. It was a bit of both actually, but we can clearly say that the eventual decision to stop was late. The drivers reported that conditions were bad, and the FIA had all the information both visual and radar-dependent to take a decision, but you could sense that had Norris not crashed, the decision to stop would have come even later. Not good enough.

Then race day came and the conditions were even worse. Delaying the start made sense with Alan Van Der Merwe putting some mileage on his medical car to explore the conditions on track necessary. But here, a few questions inevitably pop up.

Why didn’t the cars lap longer behind the safety car initially? Wasn’t there a possibility that twenty F1 cars could clear a significant amount of water from the track surface? Was there a safety concern in that?

Why weren’t the vehicles used to clear the water from the track deployed earlier and longer to try and reduce the amount of standing water on the track? After all, the main issue was lack of visibility suffered by the chasing car due to the water spray coming off the car in front.

Race director Michael Masi said safety was paramount, and that is undebatable, but wasn’t it paramount in Q3 as well?

From the start, there was this underlying feeling that the race wouldn’t go on. And that was evident in the body language of the drivers and the teams. The FIA and the stewards definitely had the data to make an earlier decision. If this was the case, the race should have been cancelled earlier, and at least sparing the poor fans – who should be applauded for their patience and commitment – all the wait in the rain and cold. It’s not like being served with the three-lap parade behind the safety car in the end was less insulting!

You cannot help but feel that what Lewis Hamilton said about the “money talking” is true and as a result the sport and fans lost out in Spa this weekend.

George Russell: What a star

What is it with Williams drivers getting poles in the rain? Anyone remember a certain Nico Hülkenberg taking pole in a slow Williams in Brazil in 2010? What a great story that was, and what an even greater one George Russell wrote this weekend.

Despite Russell getting the podium without an actual race, no one can deny him or his Williams team the fantastic job they did on Saturday.

Hopefully, Russell will not end up like Hülkenberg, and makes his way into a Mercedes soon, like next season let’s say.

The youngster has shown his capability and everyone acknowledges him as a future star. And with all respect to Valtteri Bottas, we hope that once Toto Wolff announces the decision he has already taken, the decision would see Russell partnering Hamilton next year. Good for Russell and good for the sport and its fans to see how the young charger gets along with his decorated countryman in the same team and the same car. And yes by that we mean, will Hamilton feel what it would have been like being in Fernando Alonso’s shoes in 2007??

Sergio Perez: That’s not how you repay Red Bull’s confidence

During the Belgian race weekend, Red Bull announced that Sergio Perez will be partnering Max Verstappen next year. It was a good decision by the team to announce that now and take the pressure off the Mexican who can stop worrying about his future and focus on driving instead.

To his credit, and despite still lacking in qualifying, Perez has done a solid job since joining the team, and even securing a win in Baku. But on outright pace, he is still far from where Red Bull need him to be, and despite making amends on race day, starting further back on the grid is taking him out of the strategy game his team can use to support their lead driver in the title fight.

In Spa, the trend continued, as he was out-qualified by the likes of Sebastian Vettel, Daniel Ricciardo, and Pierre Gasly in slower cars. Adding insult to injury he crashed in his reconnaissance lap to the grid. Not the way to start a contract extension.

Please do not ruin Eau Rouge

There was a lot of talk about the need to revise Eau Rouge after a series of accidents taking place there. This weekend there was a crash in the W series and a while ago in Le Mans, and don’t forget that we haven’t gotten over the loss of Anthoine Hubert at that same place in 2019.

But Eau Rouge is one of the most historic corners in F1 – although with today’s cars it not considered so – but regardless, seeing F1 cars going up the hill flat out is a sight to behold.

So while drivers’ safety should be priority, the hope is that any safety enhancement changes to Eau Rouge don’t take away any of its character.

A tribute to a legend

This weekend at Spa marked thirty years since the debut of Formula 1 legend Michael Schumacher in 1991. His debut took the F1 world by storm, and everyone at the time stood up and took notice.

He went on to rewrite the record books of the sport thanks to his commitment, work ethic, and most importantly, his immense talent behind the wheel. He changed the sport as everyone knew it and his legacy is still felt today in the sport.

Seeing the tribute helmet his son Mick Schumacher debuted this weekend was touching and nostalgic to all his fans and the F1 community in general.

It’s sad to know the difficult time he is currently enduring due to his skiing accident, and even though we would love to know more about him these days, we respect his and his family’s privacy. We can only send out our support to him and his family along with our best wishes for him to get better.