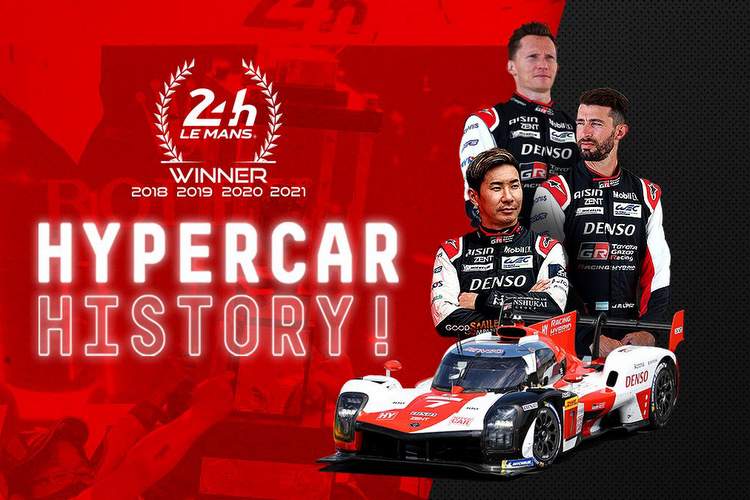 Toyota won the 24 Hours of Le Mans endurance race for the fourth year in a row on Sunday with their hybrid Hypercars finishing first and second at the Sarthe circuit.

Toyota claimed its fourth consecutive victory at the 24 Hours of Le Mans. However, this win differs from the first three. Firstly because it is the first victory of the Hypercar era. The GR010 Hybrid thus enters the history books on its maiden Le Mans as the first every Hypercar to win the race.

And, significantly, because this is the first win for the #7 crew, who have been beleaguered by misfortune in the past. Congratulations to Mike Conway, Kamui Kobayashi and José María López, this year’s big winners!

🏁Chequered Flag 🏁
This ends a crazy 24 hours of Le Mans!
Congratulations to all the teams 👏

There were so many questions before the flag was lowered to start the 89th 24 Hours of Le Mans. We wondered if Toyota would encounter mechanical hiccups as many teams do when a car embarks on its first 24-hour race. We were also curious about how the Glickenhaus 007 LMHs would perform, after the first two rounds of the World Endurance Championship (WEC). And could Alpine aspire to victory?

After a gruelling 24 hours, we have our answers – and the Japanese outfit has its 1-2 triumph! The #7 Toyota GR010-Hybrid driven by Conway, Kobayashi and López finished ahead of the #8 sister car with Buemi, Nakajima and Hartley at the wheel.

It was the end of a very long journey for today’s victors. Having claimed the second step on the podium in 2018 and 2019, then third in 2020, their 24 Hours of Le Mans history had, until now, been a tale of errors, bad luck and twists of fate, depriving them of victory every time.

Everyone says that Le Mans chooses its own winners. And now Le Mans has chosen to reward this trio for their perseverance and their consistency on the track this weekend.

Right from the start at 16:00 yesterday, the winning line-up enjoyed a very smooth race. It was a benchmark performance with the #7 in the lead at each hourly check (apart from the 13th hour).

In the #8, Sébastien Buemi was forced to push his car to the limit from the very first stint, making up for the valuable seconds lost when he was tagged by Olivier Pla in the #708 Glickenhaus 007 LMH at the first corner.

He managed to move back up to second place in just over an hour but never really threatened the #7 for the lead. The two Toyotas then remained at the top of the timesheets for the rest of the race.

Behind them, the Alpine A480-Gibson quickly established itself as the main contender for third place. André Negrão, Nicolas Lapierre and Matthieu Vaxiviere shadowed the Toyota, ready to move in if the race leaders ever slipped up.

The French team had a few issues of its own, however, most notably an off-track excursion for Matthieu Vaxiviere at the first chicane on the Mulsanne Straight just before the midway mark. Ultimately, the French car held on to its position and stepped up third on the podium. (Report by Le Mans Press Office) 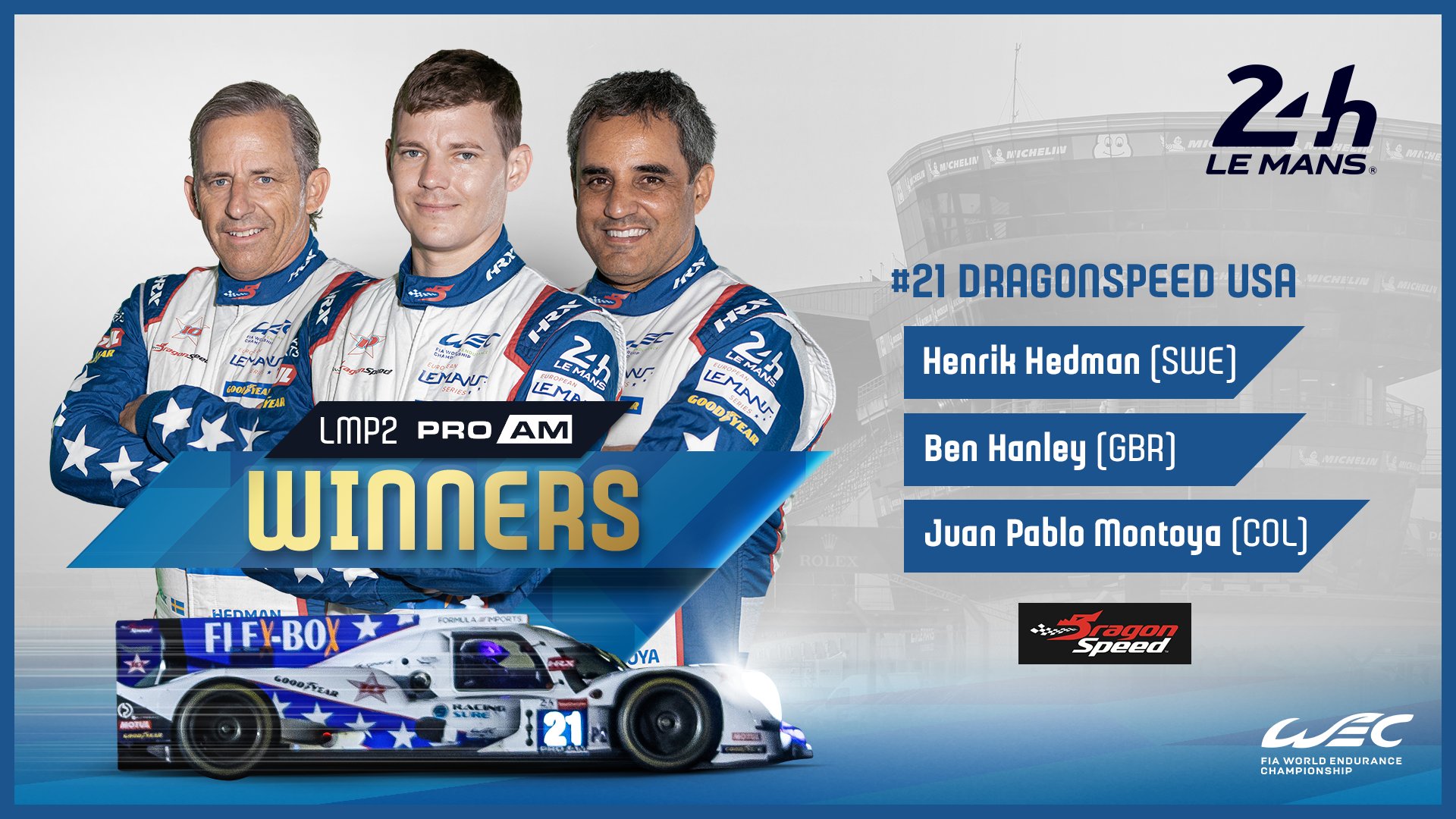 With a 25-strong grid comprising several top-notch outfits, predicting the final LMP2 outcome before the race was a risky business. Jota’s #38 Oreca 07-Gibson made an early move on the drying track with António Félix da Costa showing great form.

However, when rain began to fall again in the third hour, Anthony Davidson went off on entering the Dunlop Chicane.

United Autosports took over. After five hours of racing, Manuel Maldonado in the #32 car lost control also on that same approach to Dunlop, traversing the gravel trap and striking the #23 sister car. The team’s chances, already seriously compromised, were further diminished when gearbox issues struck the #22.

As night fell, Franco Colapinto at the wheel of the #26 Aurus 01-Gibson of G-Drive Racing collided with the Richard Mille Racing Team entry (#1 Oreca 07-Gibson of Calderón/Floersch/Visser).

The two cars fielded by Team WRT came to the fore from the seventh hour and dominated through to the chequered flag. Vincent Vosse’s outfit has capped its inaugural prototype endurance season with a superb class victory in the 24 Hours of Le Mans!

However, late, late drama saw Robert Kubica, Louis Delétraz and Yifei Ye robbed of the win. After leading for most of the race, the car came to a standstill on the track five minutes from the chequered flag handing the win to Robin Frijns, Ferdinand Habsburg and Charles Milesi.

The Jota #28 Oreca 07-Gibson driven by Sean Gelael, Stoffel Vandoorne and Tom Blomqvist finished second, with the #65 car of Panis Racing (Canal/Stevens/Allen) rounding out the podium.

AF Corse renews with success for Ferrari with another 24 Hours of Le Mans class win. The Italian constructor will soon be chasing its tenth overall win in the Hypercar category, but for now it is celebrating a GTE Pro victory with the #51 488 GTE Evo.

In the early stages of the race, the Corvette C8.Rs appeared to have the edge. The American outfit handled the tricky weather conditions well, opting for slick tyres after 40 minutes.

However, the Ferraris proved to be more consistent and eventually took command with the #51, driven by Pier Guidi, Calado and Ledogar. This is the fourth win for Amato Ferrari and Co. in LMGTE Pro, and comes 10 years after the team’s first win in La Sarthe.

The two Porsche 911 RSR-19s stayed the course but never looked close to taking the win. They were lacking pace but rest assured that they will be back for revenge in 2022! 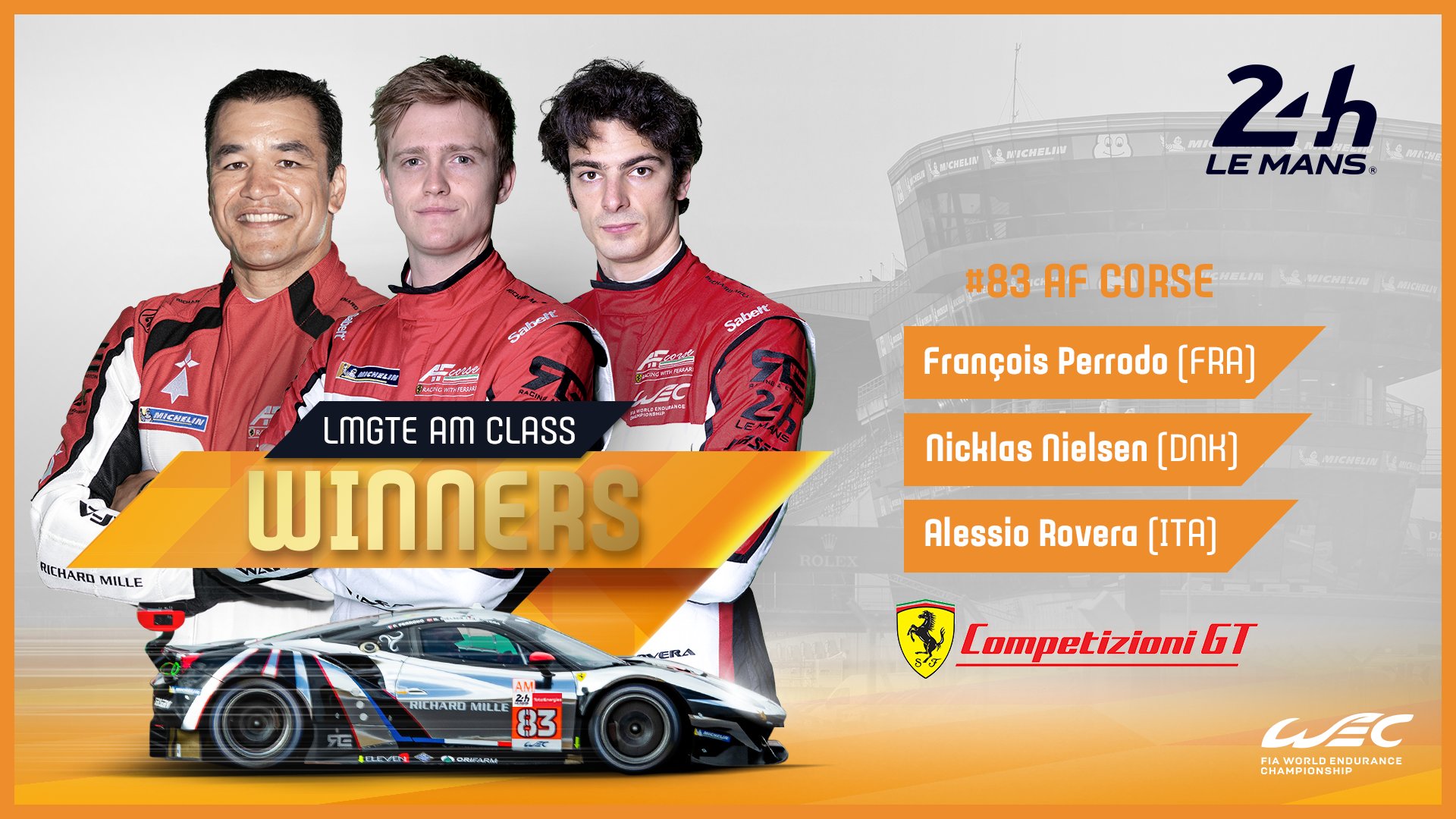 François Perrodo and Nicklas Nielsen, the WEC title holders, boast several years’ racing experience but had never managed to achieve victory at Le Mans. Today, Sunday 22 August 2021 was their day, however, and they can proudly step up on to the podium with teammate Alessio Rovera.

This is the first LMGTE Am class win for AF Corse, and rewards their presence here since 2011 (after two pole positions and four podiums). Having led the race several times, title-holder Aston Martin had to make do with second place.

The TF Sport #33 Vantage AMR driven by Keating, Pereira and Fraga finished ahead of the third-placed Iron Lynx #80 Ferrari 488 GTE Evo steered by Cressoni, Mastronardi and Illot. The three cars all finished on the same lap. 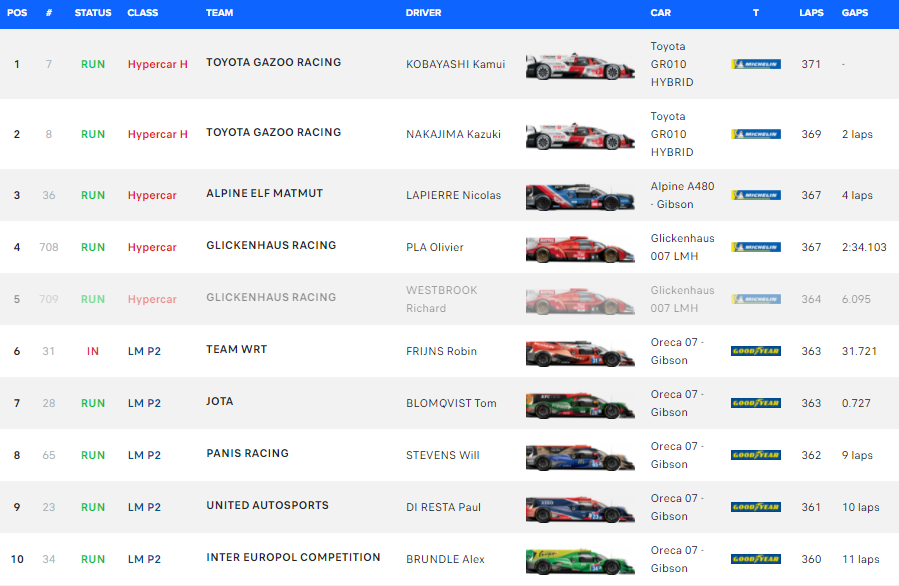 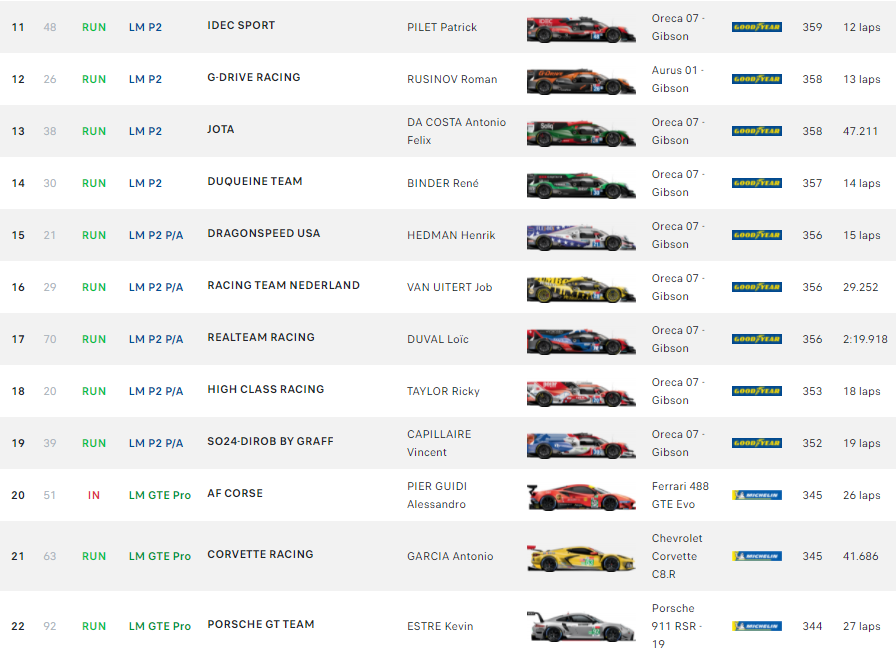