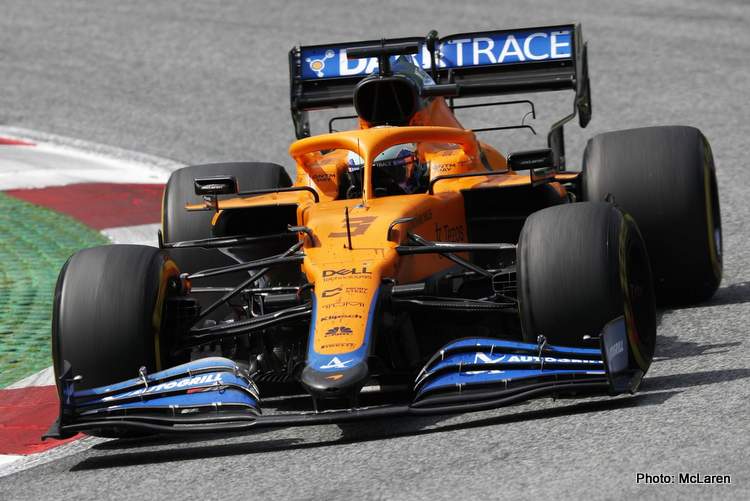 Daniel Ricciardo is being left in the dust by his ten-year younger McLaren teammate Lando Norris, the highly-rated Australian’s struggles are well a big talking point as he is finding the sweetspot with the MCL35M elusive; could his problem be brakes-related?

The admirable performance development curve of McLaren has continued in 2021 on the positive slope it has been following since the rock bottom of days that ended in 2018 with the termination of their less than fruitful partnership with its then power unit partner Honda.

A combination of innovative and effective engineering, their new power unit partnership with Mercedes and the stand out performances of Lando Norris has resulted in the Surrey team sitting third in the Formula 1 Constructors’ Championship with a 19 point lead over Ferrari in fourth and an obvious performance superiority over the Scuderia.

Curiously though, with a current WCC tally of 141 points, and Norris having scored over 70 percent of them, there appears to be a significant performance difference between Norris and his teammate Daniel Ricciardo.

Driving for three teams over the last four years, Ricciardo has struggled to adapt to the characteristics the MCL35M and match the performance levels that his teammate has been capable of, and much of this has been attributed to braking.

As the kinetic ERS sub-system (ERS-K) recovers energy under braking, the drag of the electric motor (MGU-K) also provides retardation which contributes to slowing the car. Nevertheless, as the MGU-K retardation is not constant due to variance because of the battery charge state and associated instantaneous regenerative settings, so too will the retardation the system provides vary.

It is widely acknowledged that in 2014 with the introduction of the new regulation regime that F1 is currently framed that Ricciardo adjusted more effectively and performed better than his then teammate Sebastian Vettel, and the regen/BBW behavioural characteristics were an important aspect he adapted to better.

In 2019 Ricciardo suffered from similar difficulties at Renault to what he is experiencing in 2021, and the R.S.19 was a design with which he had no initial fundamental design input into.

Conversely, in 2020 Ricciardo’s performance improved notably as the R.S.20 was designed with the inclusion of his input and feedback, and the resultant improvement in braking characteristics were noted on several occasions.

Recently, McLaren Technical Director James Key remarked on Ricciardo’s 2021 struggle, “Where differences come in are things like engine braking and how that works, how to tune it accordingly, how the chassis works, how the aerodynamics works and supports the car in certain conditions.

“Is it strong in a straight line, which is what we’ve always been, or a little bit weaker if you’re trying to carry the brakes into a corner, or [in] certain types of corner where you have different kind of braking conditions?”

This year Daniel has said: “I’m trying to programme myself to basically learn how to drive it faster. So I’m back at school.”

The graphic demonstrates that Ricciardo’s initial brake application was harder than Norris’s, but he was releasing the pedal sooner and for a longer amount of time. Norris was trail braking less, generating more braking power and braking for a shorter period of time.

Norris was washing off more speed than Ricciardo in less distance whilst generating more braking power but exerting less g-force.

Unfortunately, for the remainder of 2021, any braking system improvements for Ricciardo may well only be minor or short term fixes as he was for the opportunity for his input and requirements to be more broadly implemented into the 2022 McLaren design.

It might be a long and painful wait, but I expect that 2022 will be a much better season for Daniel Ricciardo.