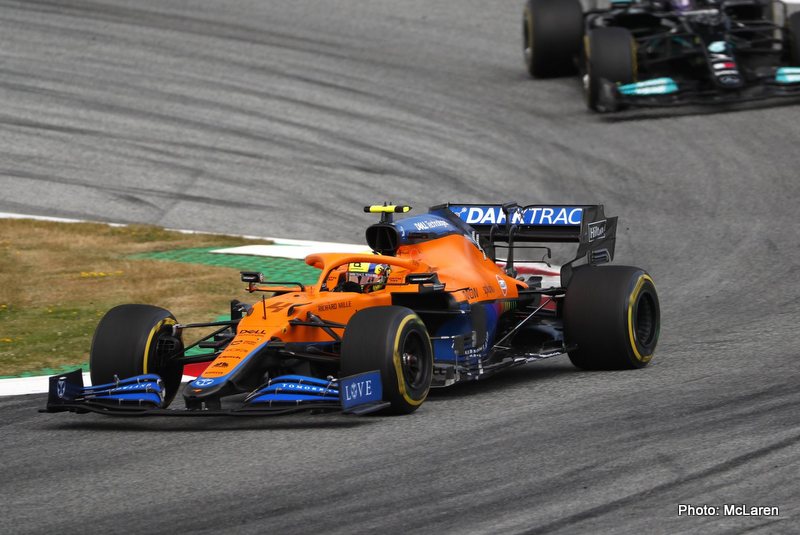 On the 20th lap of this weekends 2021 Austrian Grand Prix Lewis Hamilton passed Lando Norris for second position in the race.

Yet, it was not a change in position on merit, Norris simply relinquished. The love-in continued as Hamilton said to his team on the radio: “He’s such a great driver”. Of course Hamilton would feel that way.

On a weekend where the question of “why don’t we just let them race?” has becomes a hot topic, it just does not seem to be in the gladiatorial spirit that Formula 1 is steeped in to be coughing up second step on the podium out of what only could have been respect.

In 2021 McLaren have followed the performance gain curve of their 2020 season and coupled with the outstanding natural talent that is Norris, they found themselves legitimately battling for a podium position on merit, not by chance or some anomaly.

When Norris crossed the finish line on Sunday at the end of the last lap of the Red Bull Ring he was only 2.5 seconds behind Valtteri Bottas and had been steadily gaining as the raced came to a close.

In ceding second position to Hamilton, it is quite arguable that Lando cost himself enough time to have compromised an opportunity to finish in second position instead of third, in a year where McLaren have openly stated that championship points are critical in their battle with Ferrari and Daniel Ricciardo is struggling.

Norris is unquestionably an outstanding generational talent, but now that he is in the situation where he has a car capable of regularly competing at the point end of the race, he may be doing himself and his team better service by being a little more ruthless.

Unless a driver is being lapped, has a technical issue limiting their performance, or a teammate wanting to pass for strategic reasons, there is no reason why a driver legitimately racing for position should cede position.

F1 is the apex of world motorsport and one of the most elite sports in the world and needs to be seen that way. Gentlemen racers belong at club level.