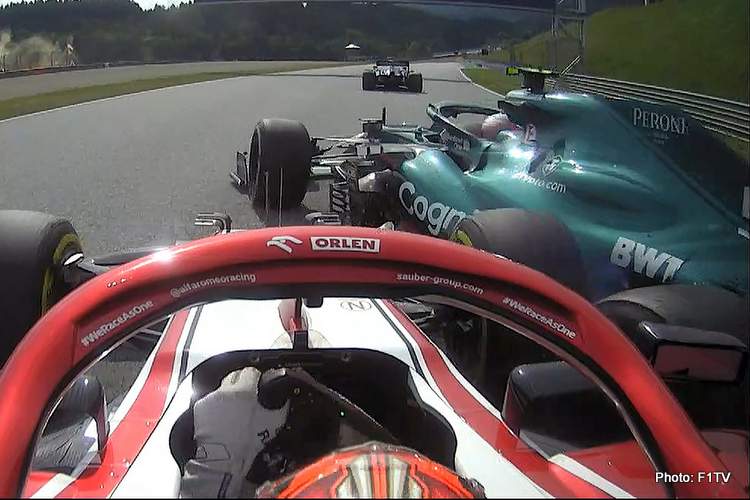 Neither Kimi Raikkonen nor Sebastian Vettel could quite explain their final lap collision at the Austrian Grand Prix as the former teammates battled for 12th.

With both drivers outside of the points, they clashed heading into Turn 5, with Raikkonen given a 20-second time penalty after the race having been adjudged to cause the contact.

Asked about the incident after the race, the Finn said that he was yet to see what happened, describing it as “an unfortunate end” to what had otherwise been a strong drive.

“Our wheels touched and off we went,” said Raikkonen. “An unfortunate end but it didn’t really change much but I have to see out it from the outside.

“I saw him there but I don’t know if I moved, or he moved. It didn’t change the result much.

“The car was ok, we caught up but we need to be a bit faster every lap. The race pace is good but not good enough for points.”

Vettel qualified eighth on Saturday but it was a difficult race for the Aston Martin team even before the clash with Raikkonen, as neither the German or his teammate Lance Stroll ended up in the points.

“I didn’t see much, I only felt the contact,” he said. “I had a good exit out of Turn 4 and just tried to stay to the right to overshoot him at the next corner.

“I don’t think there was any intention so it must have been a misunderstanding.”

Formula 1 has a weekend off before heading to Silverstone for the British Grand Prix, which is set to be held in front of a capacity crowd.