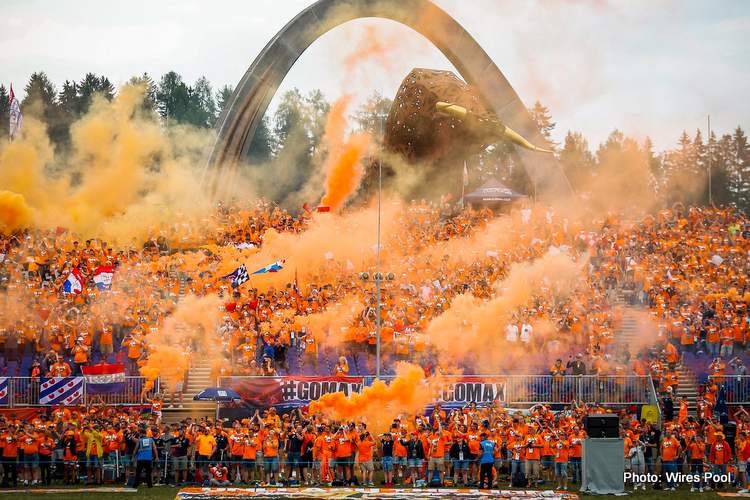 To the delight of his Orange Army, Max Verstappen punished his rivals with a Grand Slam on route to his 15th victory at the second of two races at the Red Bull Ring on Sunday, this time the Austrian Grand Prix.

In doing so, the Dutchman become the first driver in F1 history to sweep a triple-header, stark in contrast to their championship rivals Mercedes whom once again struggled to keep up giving the sea of orange clothed fans much to cheer about.

Let’s crunch the numbers and see what really went on in Spielberg.

Below I have assembled “Best Case Race Pace” for the Austrian Grand Prix and extracted the best lap, of each driver, for the laps between 6-10, 11-15…….65-71. Laps 1-5 have been ignored due to the Safety Car period for Esteban Ocon’s crash on the opening lap. 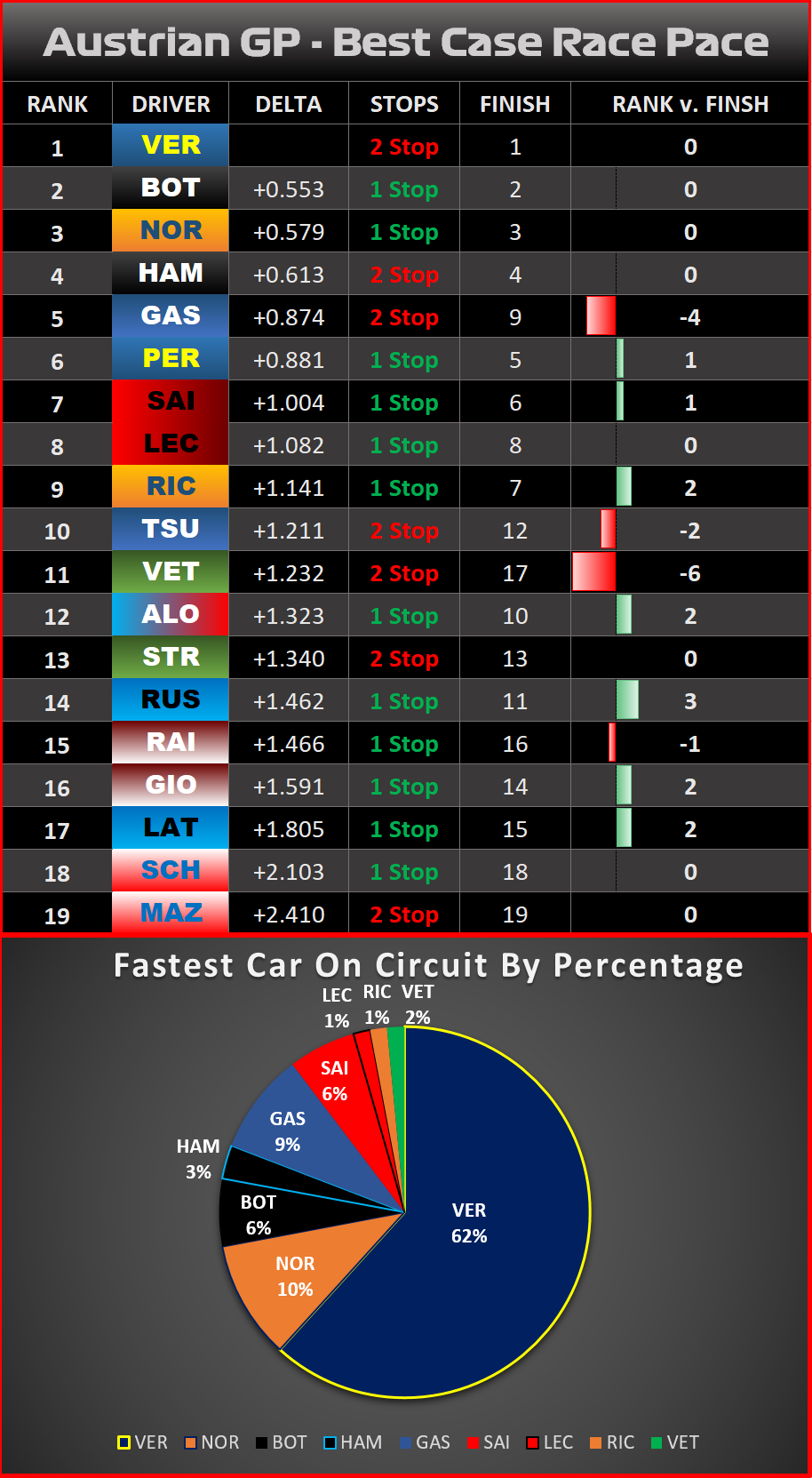 One week ago, a supreme performance from Verstappen piloting his Red Bull RB16B challenger handed Lewis Hamilton’s Mercedes squad their biggest defeat in the hybrid power unit era which began in 2014. This week, at the same Red Bull Ring circuit, Red Bull once again outmuscled Mercedes by an alarming margin of approximately six tenths to Verstappen per lap.

Interestingly, there is not a single fault in Verstappen’s race data. Not even in the crumbs of the data is there anything Verstappen didn’t do the absolute best compared to any driver on the grid, it’s remarkable.

Compounding Mercedes struggles, McLaren’s Lando Norris held onto his second place starting position off the line and quickly showcased sensational early race driving skill and maintained his position until Hamilton passed him on the inside of turn 4 on lap 20.

Valtteri Bottas then easily passed the McLaren during the first pit stop cycle as Norris was held for an extra five seconds to serve a driving infraction penalty. Bottas managed to hold off a late-race charge from Norris to finish in second place.

‘Unlucky for some’, Red Bull’s Sergio Perez looked to have pace for a second but lost out after being shown the gravel by Norris early on. Perez went on to accumulate ten seconds worth of driving infraction penalties throughout the race.

The Mexican struggled to find his groove as his day unravelled, ending the race fifth but when his penalties were applied, it pushed him down a position.

Hamilton had a difficult race struggling with damage to his W12 Mercedes fighter resulting in a significant loss of pace. Mercedes Team Principal Toto Wolff suggested that the damage was caused by an instance of aggressive curb usage around lap 30.

The numbers coincide with Toto’s timeline of the damage as lap 30 stands out as seven tenths slower on average than previous laps for Hamilton.

The result is Red Bull extended their points advantage by four points, now 44 points clear of Mercedes. Verstappen extended his points to lead to 32 points over Hamilton. Norris notably stays fourth in the championship only three points behind Perez and nine ahead of Bottas. 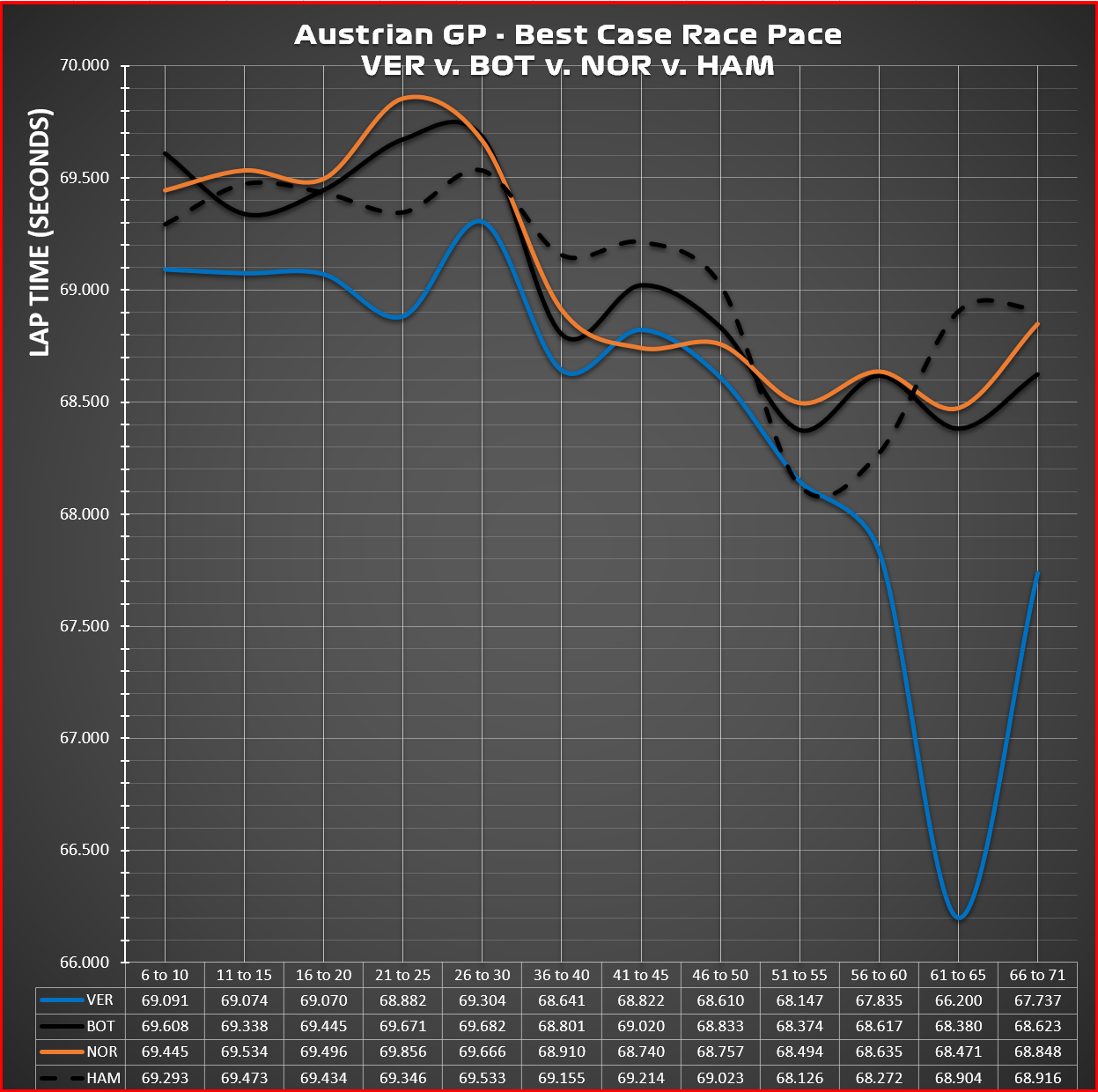 With Norris taking the fight to the leaders this week, the best of the rest award this time out was Ferrari driver Carlos Sainz.

The most pronounced lesson from the Styrian Grand Prix, one week ago, was the importance of running the hard option compound tyre on the initial stint deep into the race. It was Leclerc and Kimi Raikkonen who benefitted from this approach. This week Sainz and Raikkonen were the only two drivers to start the race on the hard compound tyre.

The result on both occasions was identical for Raikkonen who managed to just miss out on getting into striking distance for points at the end of each race. Sainz on the other hand struggled to get going at the start of the race losing positions prior to the Safety Car period on the first lap.

Sainz restarted the race on lap four in 13th position. Ferrari ran him the deepest, well beyond all drivers and pitted on lap 48 for medium compound tyres.

The Spaniard would go on to, not only catch and finish ahead of his main rivals Ricciardo and Leclerc, but Sainz managed to finish just under 10 seconds behind Perez thus stealing fifth position from the heavily penalized Mexican.

It is certainly peculiar that no other team other than Ferrari and Alfa Romeo were willing to attempt such a strategy after it worked as well as it did for the Styrian GP.

In terms of the McLaren versus Ferrari battle, McLaren extend their advantage by seven points now 19 points clear of the Italian outfit.

Marginal changes from there as AlphaTauri bagged two points, the most among the AlphTauri, Aston Martin and Alpine battle as Alpine scored one point and none for Aston Martin.

The championship standings for Alfa Romeo, Williams, and Haas remain unchanged despite an electric battle between Williams’ George Russell and Alpine’s Fernando Alonso for the final points-paying position in the closing stages of the race. 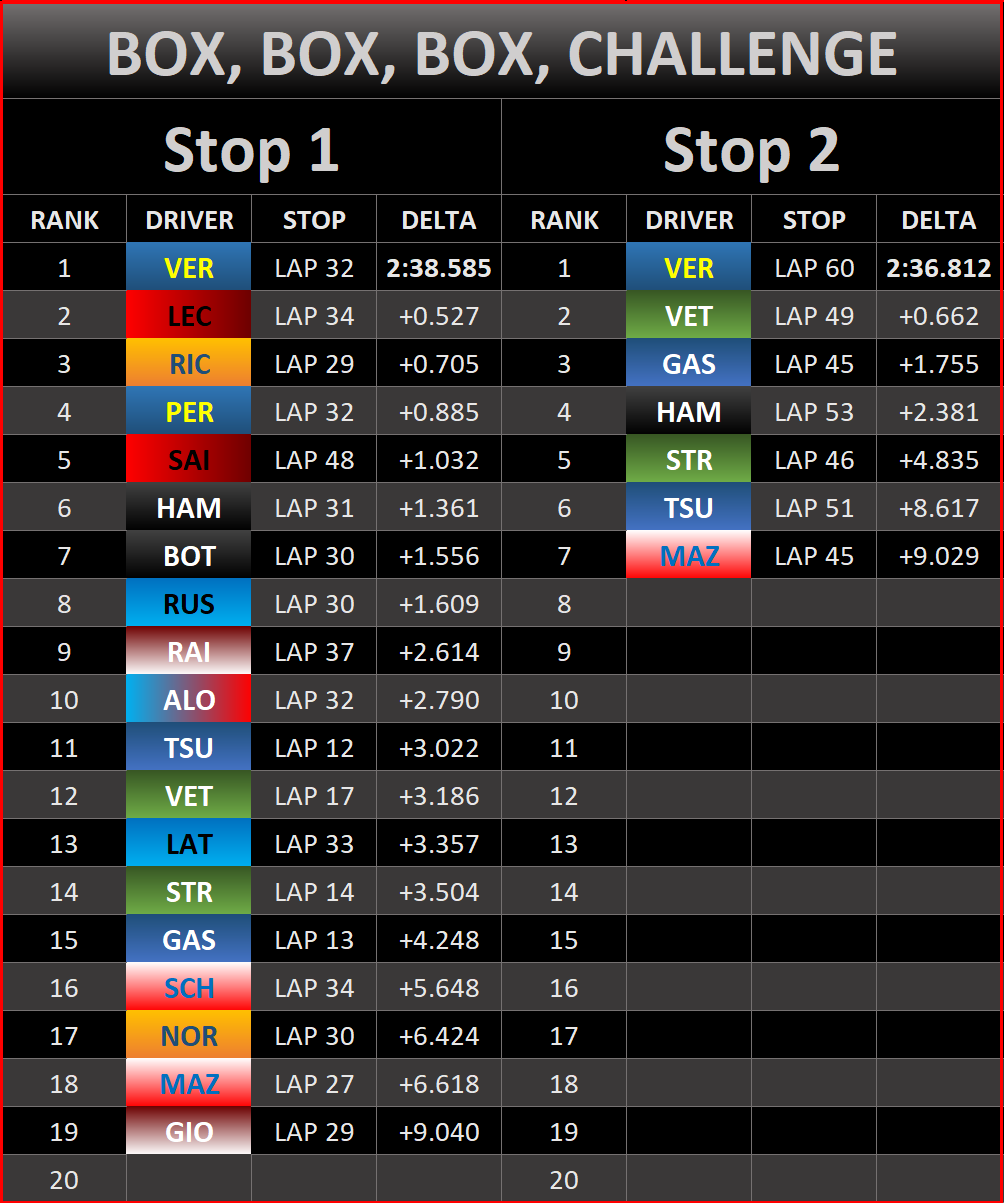 The Easter egg of the race is that Verstappen reset the youngest driver to 50 podiums statistic. Jumping ahead of Sebastian Vettel’s record, Verstappen became the youngest to do so by just over two years and one month

A Nightmare Ends For Mercedes

In three weeks, Red Bull have managed to outscore Mercedes by 18 points, with Verstappen outscoring Hamilton by 28 points.

More importantly, Red Bull have progressed to have a significant spirit-crushing pace advantage not only on Saturday but on Sunday as well.

We’ll have to wait in anticipation for what will happen at Silverstone in a fortnight’s time. 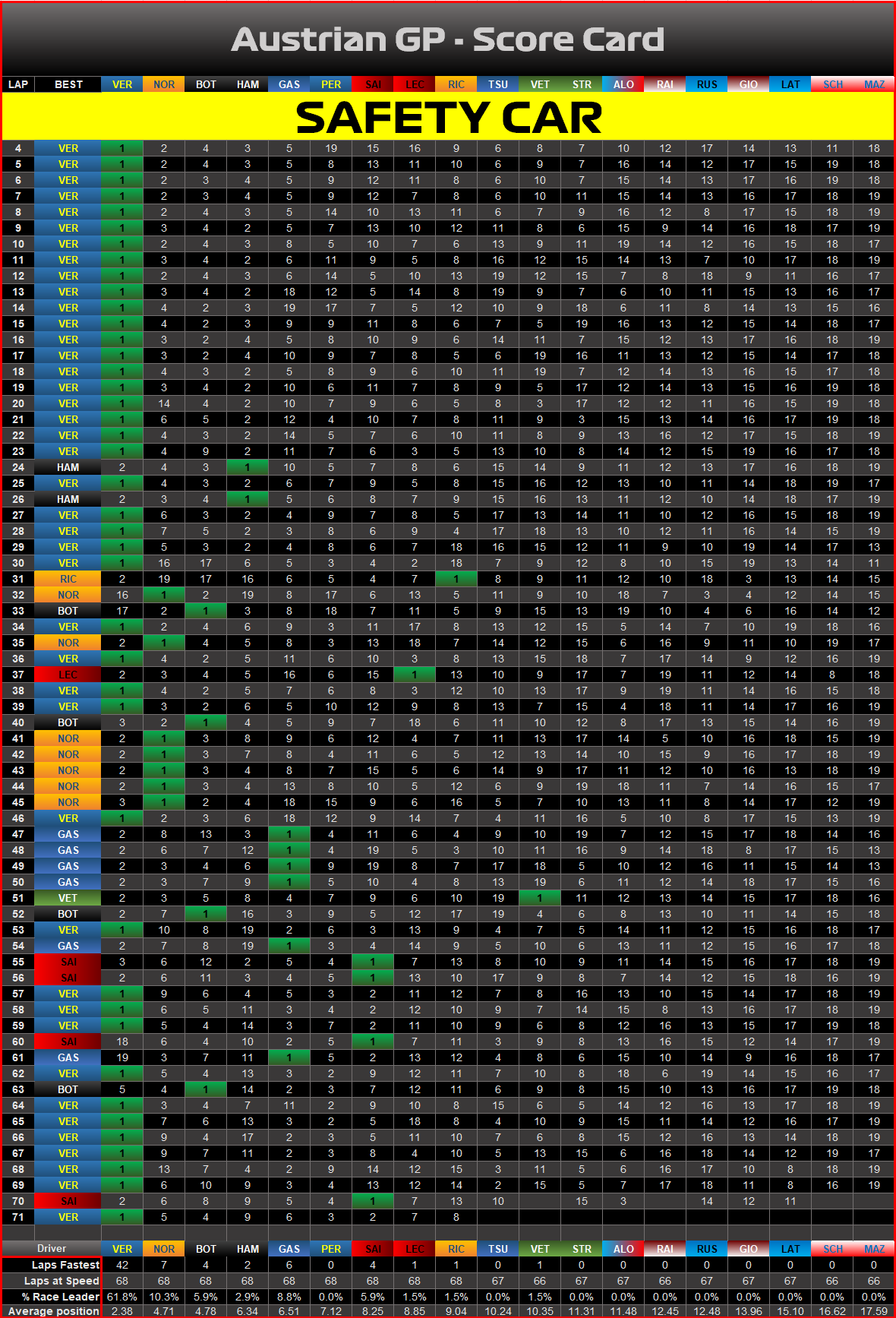