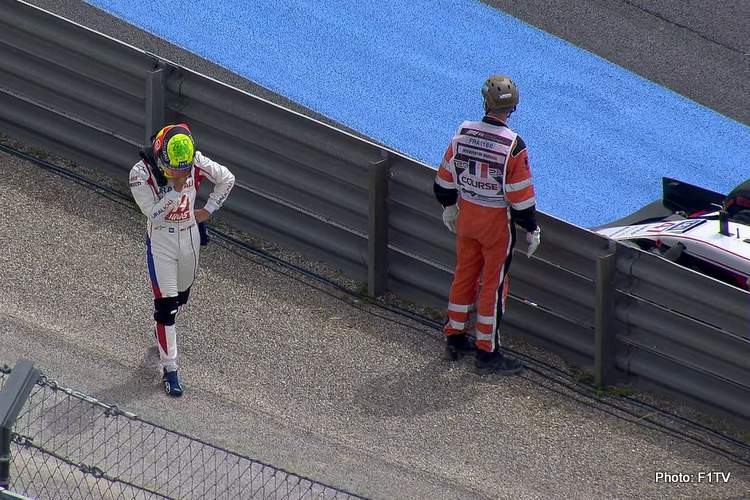 It was a bittersweet French Grand Prix qualifying for rookie Mick Schumacher, who made it through to Q2 only to crash before he could complete another lap.

The Haas is not an easy car to drive, evidenced by the mistakes he and teammate Nikita Mazepin make on a regular basis. However, Schumacher extracted a good dollop of performance on Saturday at Paul Ricard Circuit.

His best effort of 1:32.942 was good for 14th on the timing screens when Q1 ended, almost two seconds off the pole time but six tenths up on Mazepin in the sister car.

However, prepping for his final run, he got it wrong through Turn Six and spun into the barriers, damaging the Haas rear and left-front.

Schumacher explained in the team review: “I pushed too hard going into the corner and that kicked out the rear. The car is very wind affected – I don’t know if that would have triggered some extra oversteer.

“Nonetheless, we’ve managed to get into our first Q2 session of the year, so things brighten up and hopefully we can get more of those days in the future. There is damage to the car, how great we don’t know yet.

“If everything is ok we’ll start from there and obviously it is on paper, and that’s what matters to me. If something happens, I’ve got 53 laps to catch up. I’m optimistic that we see the light at the end of the tunnel.

Reporting on his team’s Saturday at Paul Ricard, Haas F1 boss Guenther Steiner said: “It would’ve been a good day if we hadn’t crashed on Mick’s last run. We’re still investigating the gearbox and if we need to change it or not.

“At the moment it seems we don’t, so let’s hope it stays like this as this would be the first time this year that we’ve got into Q2. Otherwise, nothing big to report as we just went on. Let’s hope we can start from where we are now,” added Steiner. (Additional reporting by Agnes Carlier)