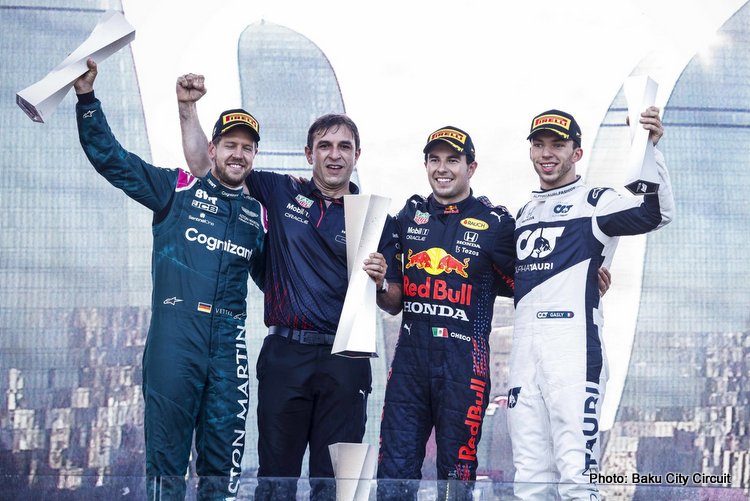 With an early threat of being a borefest, the 2021 Azerbaijan Grand Prix returned to its old habit of serving up some really dramatic racing.

After Monaco a fortnight ago, the Formula 1 circus arrived in Azerbaijan for another street race. Albeit having a faster layout than Monte Carlo, Baku posed similar challenges for both teams and drivers.

The performance trends that were seen in Monaco were expected to carry on to Baku with some differences mainly focused around the fact that Baku allows for overtaking. So nailing pole on Saturday was never a guarantee to win the race as Ferrari’s Charles Leclerc proved. Teams had to find a proper balance between qualifying and the race while finalizing their cars’ setups.

Let us look back and choose our five takeaways from the 2021 Azerbaijan Grand Prix.

As a high-speed street course, Baku’s circuit is one to be reckoned with. To make things worse, the circuit was green and lacked grip as the weekend commenced. All drivers were being conservative during practice, never close to the limit, and just pushing forward with their programs, and despite that, many ended up in the run-off areas or even worse; in the wall.

In qualifying, caution was rightly thrown out of the window as it was the time for things to get real. And Baku was ready to bite. Unsurprisingly, many drivers were locking wheels and some even found their way into the barriers with the session being red-flagged five times. That had a knock-on effect for all drivers and not only those who crashed, as many were denied second runs, ultimately affecting their final grid position.

During the race though, the drama came from another angle as Pirelli’s tyres going back to being their naughty old selves blowing up unexpectedly (more on that later) and twisting the race proceedings in ways none of us would have expected.

Ultimately, Baku ended up being a nail-biting experience for the drivers, teams, and F1 fans altogether.

More of that, please!

Pirelli should offer sacrifices to the Tyre Gods!

Let’s start by stating that what happened with Lance Stroll and Max Verstappen’s tyres is in no way acceptable. Having your tyres suddenly letting go while doing over 300kph is no joke. We are all lucky that today’s F1 cars are extremely safe. Otherwise, we would have been looking at a totally different outcome from these two high-speed crashes.

The initial comments from the Pirelli camp are pointing towards blaming debris which is not the first time. But the fact that neither Stroll nor Verstappen’s cars showed any signs of tyre trouble is quite a worry.

Pirelli have been at the center of many controversies during their tenure as Formula 1’s sole tyre supplier. Blowouts and driver complaints about the tyres’ performance have plagued the Italian tyre supplier ever since they joined F1.

You can always tell a driver to shut up and get on with it if he nags that he can’t get the tyres to work, but when matters threaten his safety, everyone should stand up and take notice.

A detailed, thorough, and transparent investigation should be carried out with clear answers provided, and proper corrective action taken to avoid the repeat of such incidents.

The “Tyre Gods” may not be as kind all the time.

Lewis Hamilton and Max Verstappen live to fight another day

After his win in Monaco, Verstappen would have been looking to consolidate his lead in the drivers’ championship in Baku by capitalizing on Mercedes’ weakness at street circuits. Once the championship goes back to more conventional circuits, Mercedes will be back to their formidable form. Especially in race conditions.

The Dutchman failed to do so, but through no fault of his own (he can thank his rear-left Pirelli for that). He was on course to storm to another commanding victory on a day when neither Mercedes, nor their star driver Lewis Hamilton, had any solution for the RB16B’s searing pace around the streets of Baku, as well as their own W12’s issues in working its tyres properly.

Hamilton, however, had the chance to deepen Verstappen’s wounds with a chance to win or at least finish on the podium, thus regaining his championship lead. Up until the race restart, he was doing a mega job keeping up with the Red Bulls; a feat made to look even better by Valtteri Bottas’s toiling in the wrong end of the grid. He ended up shooting himself in the foot when it mattered the most, with his error after the race restart. He may end up regretting that at the end of the season. With the championship being decided by the slightest margins, the points Lewis threw away in Baku will prove costly.

Although Toto Wolff refused to blame Hamilton for the mistake, it was nonetheless a mistake by the seven time champion.

Wolff, though, should be applauded for saying that to lift his driver’s spirits, which is in line with Mercedes’ “No Blame” culture they have always adopted and played a vital role in them winning all these championships. Take note Ferrari…

As a result, the two 2021 championship protagonists will assume their battle in France in two weeks time as if Baku never happened. F1 fans won’t mind that.

It was such a great feeling to see Sergio Perez along with Sebastian Vettel and Pierre Gasly on the podium in Baku.

Each of the three podium sitters deserved his result for his own reasons, and each and every one of them earned it. Some might say that Verstappen’s incident, Hamilton’s error, and Stroll’s safety-car-inducing crash handed them their results, but they all produced superlative drives on the day which put them in the position to capitalize on others’ errors/misfortunes.

After almost being out of F1 this year, Perez was handed the chance of a lifetime when scooped up by Red Bull. He has been under pressure to deliver since the beginning of 2021. After six races he delivered in style. Although not stellar in qualifying, he was brilliant in the race. Gaining positions on lap 1, enduring extreme pressure from Hamilton throughout the race, and delivering seriously consistent pace, he went on to do what his team needed him to do.

When Max was in the race, Sergio played the perfect supporting role. After Max’s crash, the Mexican stepped up and pushed Hamilton into making an error on his way to winning the race after the restart. That conserved Max’s lead in the drivers’ standing and extended Red Bull’s lead in the constructors’. Job well done!

Sebastian Vettel has endured the wrath of the Formula 1 community with fans, media, and pundits all questioning his ability, and even if he still deserved to be on the grid after his disastrous final couple of years in red. The start of 2021 was underwhelming to say the least which showed that his critics might yet be right.

However, in Monaco, something clicked and he delivered a superb 5th place. In Baku, he validated his turn of speed. Despite missing on Q3 due to his error in qualifying and the red flags, he kept his cool and delivered an admirable performance during the race with excellent tyre management, clinical overtaking, proper race craft, and great race pace. All signs of the four time champion’s golden years.

We should be cautious that returning to conventional circuits might not suit Vettel’s Honey Ryder that much, but if he keeps extracting the maximum pace out of it while delivering clean performances he will undoubtedly prove that he is truly back to his best form.

Pierre Gasly has been up against a mountain of challenges ever since he was promoted and then demoted from Red Bull. His win in Imola in 2020 was a proper vindication for the Frenchman, and his performance in Baku further consolidated his status as a proper driver. His tussles with Leclerc in the last two laps after the race restart were amazing to behold and his efforts were hence rewarded with the final podium place.

It was clear from the paddock celebrations prior to the podium ceremony that everyone was jubilant about this result, with other drivers showing their appreciation to the podium trio. It was also nice to see Perez celebrating with his old crew.

Fernando hasn’t been enjoying a great season up to now having been outperformed by his younger teammate Esteban Ocon outright.

It still remains to be seen if it is his Alpine car that is holding him back, or whether he still needs more time to get up to speed after two years away from the sport. I won’t venture and say he doesn’t have it in him anymore, because I don’t think that’s the case.

He out-qualified Ocon in Baku, but his performance after the race restart will have given his die-hard fans goosebumps. Everyone witnessed the classic, feisty Nando we all know slugging it out within the field and pulling off some proper overtaking moves.

Hopefully he keeps up that trend.