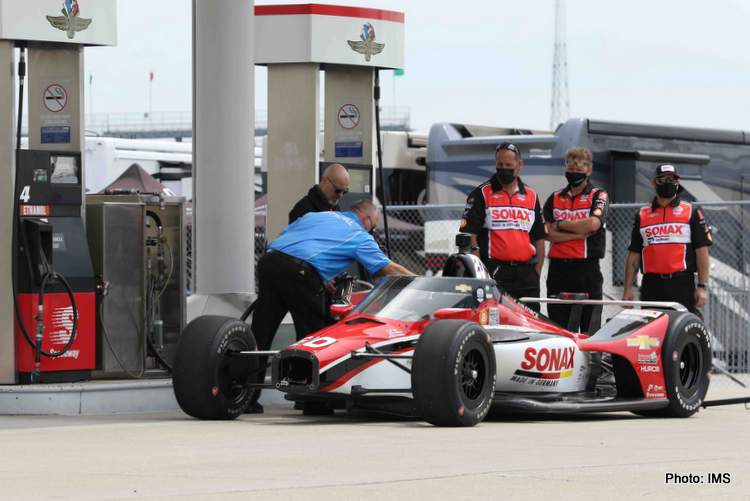 Indianapolis Motor Speedway has stood majestically in silence for far too long, but today things change as the hallowed venue awaits spectators en masse for the first time in two years.

A crowd of 135,00, amounting to 40 percent of venue capacity, will be welcomed to 105th running of the Indianapolis 500, making it the world’s largest gathering for a sporting event since the COVID-19 pandemic began.

The traditional pre-race pageantry returns, too, with the roar of 33 engines coming to life minutes ahead of the green flag at 12:45 pm local time ET (18:45 pm CET)

The NTT Indycar Series has again delivered an intriguing field, with an impressive cast of young drivers trying to dethrone a near-record number of former “Indy 500” winners in a 200-lap test of driver and machine.

To the victor will go the spoils of motorsports immortality. To paraphrase A.J. Foyt, Indianapolis makes the hero, not the other way around.

Scott Dixon will lead the charge to the Yard of Bricks, the fifth driver in history to earn the honour at least four times. But Dixon wants to be the first to take the checkered flag, too, to further cement his place among the legends of the sport. He won the “500” in 2008, but that seems like a long time ago.

Alongside the 40-year-old Dixon on the front row will be two drivers with a combined age not much more than his. Colton Herta recently turned 21. Rinus VeeKay won’t be of legal U.S. drinking age until September.

Seldom has there been a more diverse collection of storylines, with nine former “500” winners – one shy of the record — and two high-profile rookies in the field. The newcomer class includes Pietro Fittipaldi, the grandson of global icon Emerson Fittipaldi, who twice won this event, and the winner of the past three Australian Supercars championships, Scott McLaughlin, who to everyone’s surprise is the highest-qualifying driver of Team Penske’s decorated stable.

Helio Castroneves, who is making his first “Indy 500” for someone other than Roger Penske, has another opportunity to become the fourth member of the prestigious four-time winner’s club, a group comprised of Foyt, Al Unser and Rick Mears.

The numbers might just add up for Castroneves, who now drives for Meyer Shank Racing. Sixty years ago, Foyt won here for the first time. Fifty years ago, Unser won his second in succession. Thirty years ago, Mears won his fourth.

Juan Pablo Montoya and defending champion Takuma Sato will each be seeking their third place on the Borg-Warner Trophy. Only seven drivers have ended their careers with exactly three “500” victories, with Dario Franchitti becoming the most-recent three-time winner in 2012.

Perhaps a new member is meant to be considering one in the current group – Bobby Unser – passed away earlier this month. If Sato wins, he will become Indy’s first repeat winner since Castroneves in 2002.

Dixon is one of six single winners in this field, and it seems they all have a chance to reach victory lane. Tony Kanaan, the 2013 winner, has his best chance in years, in a Ganassi car.

Other fun facts about the former winners: Kanaan will become one of just 10 drivers in history with 20 or more starts. Power not only is the first Penske driver to earn a spot on the last row, winning the race will give him the record for the lowest starting position to reach victory lane. Ray Harroun (1911) and Louis Meyer (1936) each started 28th.

As anyone who has studied this race for years knows, there is a fine line between hero status and, well, something significantly short of it. Eight drivers in this field have finished second at some point in their careers, including JR Hildebrand, who crashed in Turn 4 on the final lap of the 2011 race. Yes, Castroneves and Dixon know that victory feeling, but they also have finished second three times each.

Team owners are competitive, too. While Penske’s record of 18 wins might never be challenged, two men in this field – Ganassi and Michael Andretti — are tied for second place on that list with five victories each. Both are beyond hungry to break the tie.

Ganassi last won in 2012; Andretti’s most recent win was in 2017. Lou Moore was once was the standard for car owners, winning the race five times in eight starts between 1938 and 1949.

This field includes a host of season champions, too, led by Dixon, the reigning NTT Indycar Series S champion who is seeking his record-tying seventh. Sebastien Bourdais is a four-time season champion, and Josef Newgarden has won two. Montoya, Kanaan, Hunter-Reay, Power and Pagenaud also have Indycar titles in their careers. Kanaan has led the ‘500” a record 14 times.

The family element of the “Indy 500” is another significant storyline in Sunday’s race. Sons, grandsons and brothers are carrying on the family name, and the best examples are Marco Andretti and Graham Rahal, who continue to seek the ultimate prize won by their grandfather and father, in 1969 and 1986, respectively.

Andretti could use some of Johnny Rutherford’s mojo. Rutherford won the pole in 1974 but didn’t lead a lap in the race, then won from the 25th starting position the next year. Andretti can repeat that to a tee with a victory Sunday.

Herta has already done something his father, Bryan, never did here – he has qualified on the front row. Now his goal is to finish higher than pops did (third in 2005). Colton had his best finish last year, in eighth.

Conor Daly already has one more start than his father, Derek, and Stefan Wilson seeks to earn a top-five finish as his brother, Justin, did in 2013.

Indy’s youth movement is real. Herta, VeeKay and Pato O’Ward can all break Troy Ruttman’s record as the youngest “500” winner, a mark set in 1952. Ruttman was 22 years, 80 days old when he beat Jim Rathmann by more than four minutes. This crop of talented drivers is so young that Herta and VeeKay will have two more chances to break the record, and this is already Herta’s third Indy start and VeeKay’s second.

Dixon also has a chance to break an important “500” record. Leading 82 laps will make him the all-time lap leader, breaking Al Unser’s mark of 644.

The “500” has always had an international flair, but this year it goes to a higher level with a record number of countries (15) represented.

This Indycar Series season has been noted for its parity, but having five different drivers winning the first five races of the season has happened three times in the past five years. But here’s the catch: All three of this year’s first-time career race winners – Alex Palou, O’Ward and VeeKay – have strong chances to win Indy. Their average starting position is 7.0.

Even the back row of this field is interesting. Sage Karam starts 31st for the third consecutive year and the fourth time in his career. Power is 32nd with De Silvestro, who last raced here in 2015, 33rd in a car owned and mostly crewed by women. Paretta Autosport is entered by longtime industry executive Beth Paretta.

The field average of 230.294 mph is the fastest in history, and the green flag can’t get here fast enough for a motorsports fan eager for these grandstands come to life as they have for more than a century.

The hour is drawing near. Be still for now; the roar is soon to begin in Indianapolis. (Report by Curt Cavin)