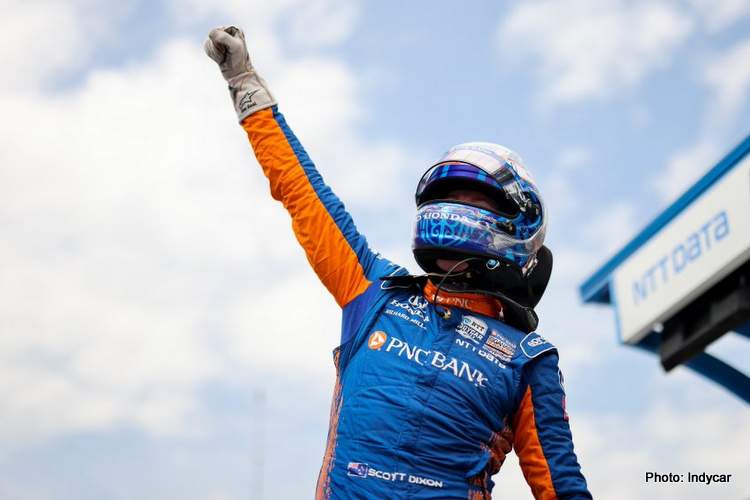 Veteran Indycar driver Scott Dixon saw his team tinkering with his race car but asked no questions and when his three teammates made their Indianapolis 500 qualifying attempts, he didn’t want to hear their feedback.

The six-time IndyCar champion and greatest driver of his generation wanted to be left alone to prepare for his own gutsy run around Indianapolis Motor Speedway. Two of IndyCar’s budding young stars sat atop the leaderboard in Sunday qualifying and “The Iceman” was determined to push them aside.

Dixon did just that and slammed the brakes on IndyCar’s current youth movement by claiming his fourth Indianapolis 500 pole by a mere 0.03 seconds, or roughly six feet over the 10-mile qualifying run.

“It was pretty hairy, glad it’s over. It was definitely pretty tense,” Dixon said. “I could see the mechanics working on the car as we rolled through, adjusting the wings. I asked them not to tell me. It’s definitely a roller coaster of emotions for everybody and I’m actually really relieved that that’s all over.”

Dixon was the final driver on the track in the Fast Nine portion of qualifying that sets the first three rows for next Sunday’s race. Chip Ganassi Racing has been consistently strong all week at Indy and all four of its cars were part of the Fast Nine competing for the pole.

His speed can’t be beat.

The Ganassi group liked its chances and Dixon was comfortable going out last. But then Rinus VeeKay and Ed Carpenter, the only two Chevrolet drivers competing against seven Honda teams in the Fast Nine, posted a pair of monster laps and VeeKay landed a spot on the front row.

Dixon, the 2008 Indy 500 winner who also has three runner-up finishes that includes last year’s race, suddenly wished it wasn’t up to him to beat the kids.

“I’d prefer going last, for sure. But then I didn’t after I saw the ECR and Herta runs. I was definitely pretty nervous,” Dixon said. “You’re just trying to stay as calm as possible. For me, I think probably for all of us, the best situation for us is actually just being in the car and doing what we really enjoy, what we love.

“The nerves are all about just that competition level is just through the roof right now.”

Dixon turns 41 in July — the combined age of the two drivers starting next to him in the Indy 500.

Herta, who is rapidly becoming a star in the series, didn’t complain about being bumped by Dixon.

“I just can’t wait for next Sunday, we’ve got a good race car,” Herta said. “Second place is not too bad of a place to start.”

Honda rolled into the Fast Nine qualifying session with seven drivers compared to two for rival Chevrolet. But the Chevy power seems just fine as VeeKay and team owner Carpenter qualified third and fourth and sat atop the leaderboard until Herta and Dixon made the final two runs of the day.

Lining up next to Carpenter on the second row will be Tony Kanaan, at 46 the oldest driver in the field, and Alex Palou. Kanaan and Palou are Dixon’s teammates at Ganassi, as is Marcus Ericsson, who qualified ninth.

“If I was a fan, I’d be really excited with that Fast Nine qualifying. Guys just kept going faster every single run,” said Herta, who then muttered a curse word when he learned his starting position earned him an 8 a.m. Monday photo shoot for the front-row qualifiers.

“It’s very weird that the guy starting ahead of me was wearing diapers when I started my first Indy 500,” Kanaan said of VeeKay, who becomes the youngest front-row starter in 105 runnings of the race.

In a 75-minute shootout for the final three spots in the field held right before the Fast Nine session, Sage Karam, Will Power and Simona de Silvestro made the race. Charlie Kimball and R.C. Enerson were knocked from the 33-car field. (Report by Jenna Fryer)

His speed can’t be beat.