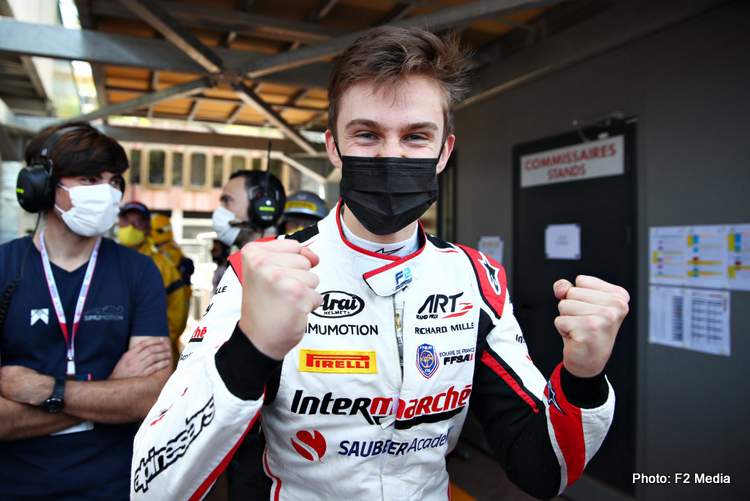 At 17-years-old, Pourchaire won in the streets of Monte Carlo, an action which he can only legally do in a racecar. A popular winner for the local fans, the Frenchman was joined on the podium by Oscar Piastri and Felipe Drugovich who made the alternate strategy work in his favour.

Off the grid, Theo Pourchaire was able to hold off Robert Shwartzman into Sainte Devote. Despite a number of cars taking to the inside of Turn 1, contact was avoided throughout but Jack Aitken, standing in for Matteo Nannini at HWA, stalled off the line and had to be pushed back by the marshalls.

Pourchaire and Shwartzman were both able to lead an early breakaway, with the peloton, headed by Oscar Piastri, some 5-seconds behind after only 5 laps. 5 laps later, that gap was back down to just over 2-seconds with Piastri and Ticktum finding their rhythm with Ticktum, Saturday mornings race winner, setting a string of fastest laps as he demonstrated how comfortable he was around the tight streets of Monte Carlo.

Christian Lundgaard found himself stuck behind Roy Nissany, considerably hindering his forwards progress the more they fought over 7th place. The pair had dropped away from the front pack which had extended to the top five. Lundgaard was tipped as an early championship contender but had not scored any points in Monaco ahead of the feature race.

Contact in the battle for 19th between Jehan Daruvala and Gianluca Petecof put the former out of the running at the Nouvelle Chicane. The Indian driver had been penalised and forced to pit by a black-and-orange flag, having to go long on his tyres as a result.

At the halfway stage, 17-year-old Theo Pourchaire continued to lead with the top five covered by just five seconds. Fourth-placed Ticktum was called in by his Carlin crew in an attempt to undercut Piastri for the final podium place. Ticktum lost over five seconds in the cycle, rejoining right in front of Felipe Drugovich who was running on the alternative strategy.

Robert Shwartzman’s bad luck continued again with a poor pitstop at Prema. Piastri and Ticktum both climbed up the pecking order and with 12-laps left, Shwartzman would need outside help to rescue his podium hopes.

Shwartzman’s luck could have returned to him when Juri Vips ran Marcus Armstrong into the wall at Rascasse, but despite a stricken Dams by the pit entrance, only a VSC was deployed meaning no bunching of the field, and importantly for F2 and Guanyu Zhou, no pit stops that would count as mandatory.

A second VSC was triggered seconds after the first was cleared when Lirim Zendeli had an off on cold tyres, also at the Rascasse, but there would still be no safety car for the likes of Shwartzman and Zhou looking for a helping hand.

Rascasse saw more action again just mere seconds after the VSC was withdrawn and a third VSC deployed. Into the Piscine complex, Piastri locked up ahead of Ticktum, opening an opportunity into the final corners of the lap around the outside of the Prema. The move, as it transpired, was not on and TIcktum ran out of track, stopping inches from the barrier but stalling and subsequently retiring from the race, giving Drugovich a shot at the podium.

The laps under VSC would have given Zhou hope in that although he could not pit and complete his mandatory stop, those chasing him were also not able to catch him on 37 lap old tyres. With 5 laps to go, Zhou came into the pits, rejoining in fourth ahead of Shwartzman.

With the mandatory stops all completed, Pourchaire regained the lead which he turned into a maiden race win, ahead of Piastri and Drugovich. The success of both Piastri and Pourchaire, and the misfortune of those including Daruvala and Ticktum, promoted the Australian into second in the standings and the Frenchman into third ahead of their next outing at Baku, Azerbaijan.