Leclerc: It’s a shame to finish in the wall 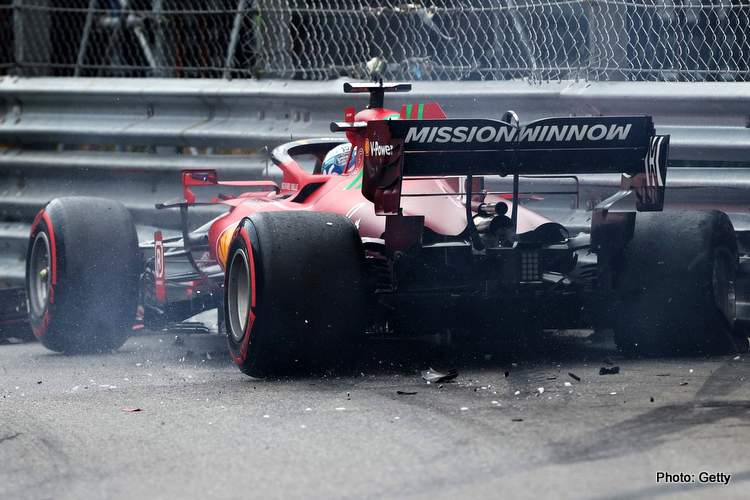 The Monaco Kid did it! Charles Leclerc claimed pole position for his home Monaco Grand Prix, but a late crash nearly meant a grid penalty for the Ferrari driver.

Leclerc and his teammate Carlos Sainz surprised all, including themselves, with their pace around Monaco which put them up with Mercedes and Red Bull as pre-qualifying favourites.

In the afternoon qualifying session at the Principality on Saturday, Leclerc set the fastest lap with his first effort in Q3 but, with two laps required to extract the maximum from the Pirelli tyres, he looked to go quicker with his final shot.

But exiting the Piscine complex, the front-right wheel of his Ferrari clipped the Armco, breaking the track rod as it plunged over the sausage kerbs and into the barriers.

And that was that. While Leclerc would go no quicker, the Monegasque ended the session with a crumpled car but his name was top of the timesheets. The late red flag meant all his rivals, many on faster laps, were denied their best runs and sparked frustration.

Leclerc said afterwards: “It’s a shame to finish in the wall, it doesn’t feel the same but I’m incredibly happy about my lap. I didn’t do a great first corner but then in the second and third sector I nailed it. Just very, very happy to be on pole as it was very difficult to manage myself mentally after Q2.

“I could feel I was quite emotional in the car – now it’s Q3, now it’s time to put everything together. I managed to do so and I’m incredibly happy.

“It’s tomorrow that we score points but we are incredibly surprised to be on pole and fourth place for the race tomorrow,” explained Leclerc with reference to his teammate Sainz.

Leclerc could face a grid penalty if the damage to his car requires an engine or gearbox change, which has him concerned: “I am worried about a penalty [for the gear box]. I’ve always been very unlucky here, so let’s just wait and see.”

Whatever the outcome, Ferrari found welcome good form on the streets of Monte-Carlo, and with a decent car Leclerc is able to deliver and his teammate Sainz is right up there with him.

This year’s race is the 67th edition F1 World Championship history and 78th since the first grand prix in the principality in 1929. Last year’s cancellation was the first absence since 1954.

For the occasion, Leclerc is wearing a special helmet dedicated to Louis Chiron, who won the Monaco Grand Prix in 1931, before it was a part of the F1 world championships.

If Leclerc’s gearbox indeed does need to be changed for the race, he will serve a five-place grid penalty and Verstappen will line up in top spot on Sunday.

Note: Since this report was written, it has emerged that the Ferrari is good to go and Leclerc will thus start from top spot of the grid for his home race. More here>>>

Not how Charles Leclerc would have expected to take his eighth pole position 😱#MonacoGP 🇲🇨 #F1 pic.twitter.com/1Dq2Sg4Y7Q