Grosjean: After 5-minutes at Mercedes you see why… 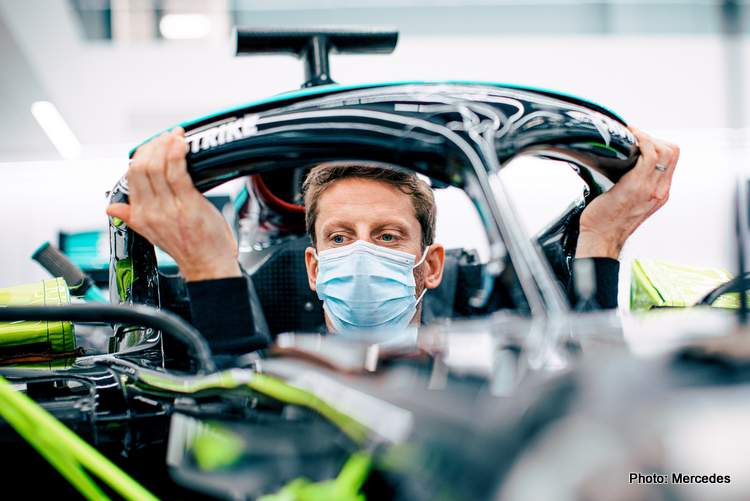 Ahead of his gifted demo-run and test with Mercedes, Romain Grosjean was at Brackley for a seat fitting and familiarisation session where he immediately saw why the Formula 1 World Champions are so mighty.

Grosjean, former Haas driver who switched to Indycar this year, will have a run in the car at the French Grand Prix followed by a private test at Paul Ricard.

Speaking on Beyond the Grid podcast, Grosjean said: “I got to the factory and I was amazed by the facilities, the way people are working around it. After five minutes within Mercedes in Brackley, I could understand easily why they were the most successful sports team in history.

“Find another team, whatever sport, that has been winning as much as Mercedes has done. It is almost impossible. Therefore, getting in there and seeing and understanding it, it is very clear.

“Even though this year everyone in Bahrain testing was like ‘Red Bull is faster,’ here we go, with three races done – Mercedes two, Red Bull one. That is the strength of that team. They may not have the fastest car but they will always find a solution around that and you feel it when you are there.”

Grosjean drove for what were essentially two teams in F1, starting with his debut at the 2009 European Grand Prix in Valencia with Renault, which morphed into Lotus. In 2016, Grosjean joined Haas to spearhead the American team’s F1 foray.

He sampled Mercedes power for a season, in 2015, when Lotus switched from Renault to the tristar.

As for the glaring differences between the F1 organisations he has experienced, Grosjean ventured: “I would say it is the culture at the top. Then from there, the detail is pushed to the maximum. Everyone is really trying to get the solution, to find the solution to go faster.

“Obviously, the facilities are incredible but I guess many teams can have the facilities but then it is just how you use it, how you optimise it,” explained the 35-year-old Frenchman.

Next month, Romain Grosjean will get behind the wheel of an F1 car for the first time since his crash in Bahrain

He will drive Lewis Hamilton’s title-winning Mercedes W10 in a demo run at the #FrenchGP, then in a full test day#F1 @RGrosjean @MercedesAMGF1 pic.twitter.com/m6Wxi6GsJs