Brundle: I don’t agree with Red Bull about track limits 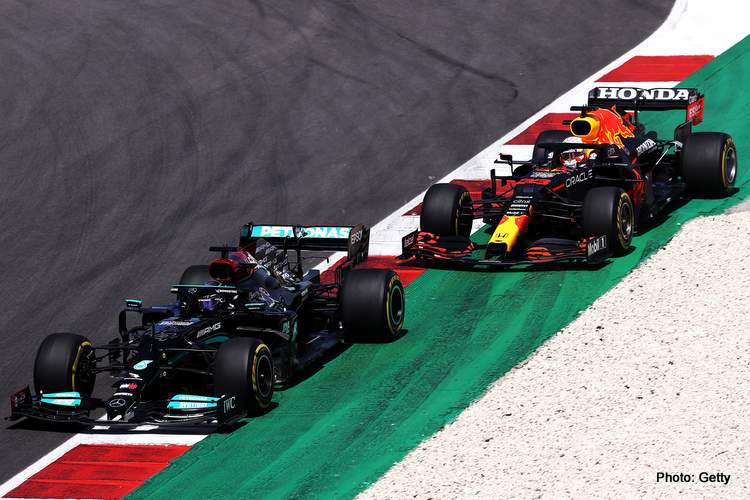 The Red Bull driver was the victim of laps deleted because he transgressed track limits as stipulated by the race direction. It happened at Imola too, costing Verstappen pole position which his teammate Sergio Perez snatched that Saturday.

This time around, at Autodromo do Algarve, he also had a qualy lap disallowed and in the race erred during his fastest lap bid during the race. He then went on to wish petulantly that F1 never returns to the venue.

And of course, always quick to cry foul, Red Bull’s Christian Horner and Helmut Marko made it sound they were being victimised.

In the wake of the race in Portimao, Brundle explained why he believes Red Bull are off the mark with their allegations. He wrote in his Sky F1 column:

“With a victory and two-second places, it’s Max’s best-ever start to a season but he’s going to be feeling very uneasy about the increasing pace of Mercedes.

“I don’t agree with Red Bull about track limit inconsistency and their claim that they have now been robbed of a victory, a pole position and a fastest lap additional point this season.

“Motorsport is controlled by the FIA in an impressive and comprehensive way with paperwork and key personnel.

“That paperwork includes the 80-page (bilingual) International Sporting Code, and specifically for F1, the 88-page Sporting Regulations, and finally the Race Director’s supplementary event notes. (There’s another significant raft of documents and processes on the technical side).

“It was clear that Turns 1, 4, 5 and 15 would be monitored for track limits from the outset. Then at 9am on Saturday morning a version 3 of the supplementary regs was issued and Turn 14 was comprehensively mentioned in bright pink additional text.

“The relevant fundamental track limit regulation, which we don’t actually stick to, says this:

Brundle continued: “But the fact is that the rules are not properly applied and could be much tougher by observing the white line which defines our field of play. If cars are 1kg underweight or a millimetre too wide they are excluded from the event.

“Why should we then be sloppy about policing the track to make life easy for the drivers?

“As I mentioned in my previous column if you run wide you can reduce the angle of the corner and carry more speed in, through and out to gain some metres. This can be monitored in the mini-timing loops as well as observing the car’s physical position, but the timing loops won’t tell much unless the driver is on fresh tyres and going for it.

“The kerbs have been fundamentally lowered over the decades such that in places they are no higher than a coat of paint. This was to stop cars being launched into the air such as Rubens Barrichello in Imola 1994, and also to help stop motorcycle racers from being badly injured.

“A racer’s job thereafter is to minimise the distance of every lap and to maximise the angle of every corner. The FIA’s job is to stop them.

“You would laugh out loud if football ignored the goal or touch line when it suited certain teams, or cricket stumps were repositioned by a batsman as he saw fit, or if somebody trying to beat Usain Bolt simply moved their starting blocks forward a few metres.

“Only one driver was penalised in the race for transgressing the track limits at Turn 14 and it cost Verstappen and Red Bull a championship point because he gained an advantage out there and didn’t control his car fully within the confines of the track.

“As we know barriers at street circuits are the best track limit devices but, even then, in Monaco, there are two chicane zones where a driver can cut through. Artificial grass is used in places but this can come adrift. Otherwise, I guess it has to be gravel trenches wide enough to dissuade the drivers from making up their own track.

“But that won’t necessarily work effectively for motorbikes, or Sports/GT/Touring cars. Meanwhile, it needs a very firm hand otherwise drivers will take ever more liberties.

“In Le Mans-style sportscar racing, track limit observation is brutal and drivers control their cars accordingly. At my friend Jonathan Palmer’s corporate driving venue in Bedford, if you run wide and cheat the engine power cuts.

“This would be potentially dangerous at F1 speeds but a driver could, say, lose DRS activation for a couple of laps, although of course, that’s no pain for them near the end of the race,” concluded Brundle.