Sainz: It’s difficult to think about the positives 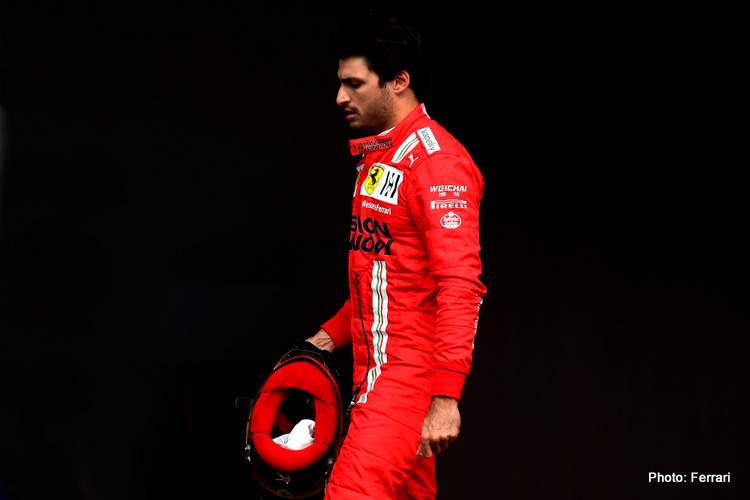 Carlos Sainz outqualified his highly-rated teammate Charles Leclerc for the 2021 Portuguese Grand Prix in only his third race as a Ferrari driver but race day in Portimao turned out to be a big disappointment for the Spaniard through no fault of his own.

In the wake of the weekend in Portugal, it is worth noting that last year’s woeful Ferrari SF1000 did better than this year’s offering from Maranello; at least last year, both Sebastian Vettel and Leclerc scored points with the latter finishing fourth.

A year later he was sixth and his teammate, this time around, Sainz was out of the points.

The reality check on Sunday was that Ferrari are not resurgent as the hype suggested after the first two rounds, they desperately need to find a notch or two to take on McLaren, let alone pacesetters Red Bull and Mercedes who are simply in another league relative to the Reds right now.

Sainz’s race was particularly disappointing, not only did he slide mercilessly down the field with the wrong tyre choice in Portimao on Sunday, but he also got the dreaded “Fernando-is-faster-than-you” call to allow faster teammate Leclerc through.

Looking back on a tough race, Sainz said: “Hindsight is a beautiful thing, and in hindsight, clearly the hard tyre was simply stronger, particularly on our car. We struggled a lot with the mediums.

“We need to still understand why we were so prone to graining on that medium tyre, why the combination of the medium with our car was just not working well.

“In hindsight, for sure we would have done things very differently but with the data we had available before the race, we thought that a soft-medium strategy was going to be OK, and it clearly was not.

“We have a lot to analyse and a lot to go through now in these next three or four days. I’m sure we will make the right conclusions and improve going forward. I know that in the race, it was in our hands and in my hand to score a top-five, top-six result with a decent race execution and the pace we have shown all weekend.

“To come out with zero points and an 11th place, it’s difficult to think about the positives,” admitted Sainz, whose team did him no favours by getting the strategy for the #55 car hopelessly wrong. They had him on the soft tyre to start which kept him in the top six, but once they pitted for the mediums it was game over.

Leclerc, on the other hand, started the race on the mediums and then swapped to hards which operated a lot better than the combo on the sister car. So much so that the team were forced to make Sainz cede position to his teammate who was a lot faster at that point and thereafter.

Ferrari team boss Mattia Binotto explained: “Swapping position is something that we would like to avoid, things that are normally aren’t great, but sometimes maybe necessary. We felt it when we saw the discrepancy in pace.

“We could see that Carlos was suffering from the graining with the medium. We asked him to move over and he did it immediately. He understood the message. When you’ve got drivers that understand what the priorities are and they support the team, it is always a pleasure,” added Binotto.

For now, Sainz has to take the defeat on the chin, but he and his minders will be asking how the Ferrari pitwall got the tyre choice so wrong, on race day, that they somehow turned fifth place on the grid for Carlos into 11th, without a mistake from their new driver all day.

Meanwhile, in the other car, Leclerc and his side of the garage turned eighth on the grid to sixth place. It is sure to only be a matter of time (and more few strategy mess ups) before the Sainz camp and an increasingly involved Spanish media start to ask some awkward questions of Ferrari.