Dr Gordin: I remember the blood, silence and tears 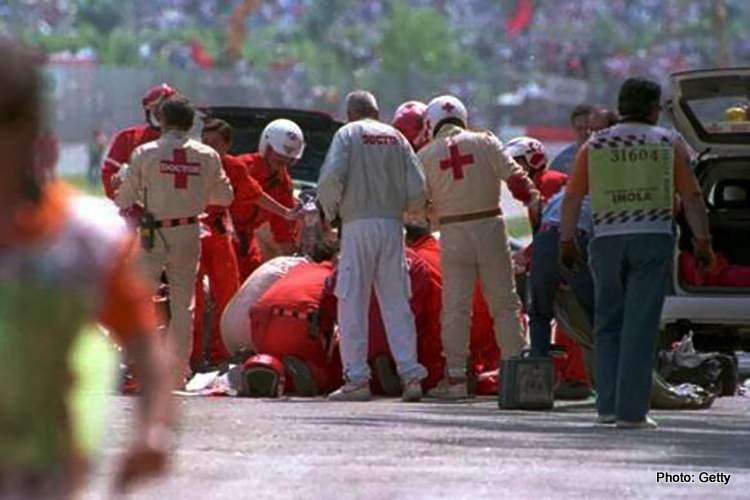 Dr Giovanni Gordin was on hand when Ayrton Senna crashed his Williams and died during the San Marino Grand Prix on May 1, 1994.

The doctor on duty that day, for the 118 emergency services of Bologna, was one of the medical team, headed by the late Professor Sid Watkins who did all they could to save Senna, to no avail as the triple F1 World Champion was proclaimed dead at 18:37 pm local time.

Now 67-years-old, Dr Gordin spoke for the first time about those final moments of the Brazilian’s life, recalling the tragedy 27 years after it happened during an interview with Gazzetta, on what is May Day, fittingly also Ayrton Senna Day

Before going into profound details, some of which have never before been reported publically, Dr Gordin summed up the final moments of Senna’s life: “I remember the blood, the transport by helicopter, the silence and the tears of his friend Berger.”

[Note: This is a very graphic first-hand account that may upset sensitive readers or distress fans of Ayrton Senna – which we all are – but for the sake of record and transparency regarding the passing of one of motorsport’s greatest icons takes precedence over sensitivities. A story that has to be told. If this could upset you, please refrain from reading further.]

“I was at the circuit attending to the accident between JJ Lehto and Pedro Lamy at the start, as car debris and tyres flew into the grandstand. A few minutes later the voice of Mauro Sacchetti [then co-ordinator of the medical services at the venue that weekend] reached me via radio with three clear words: Senna, Tamburello accident.

“I was immediately worried, as that corner evoked bad memories of Gerhard Berger in 1989, stuck in his burning Ferrari and saved thanks to the timely intervention of the men of the fire service. So, I took my medical scooter and headed to Tamburello.

“I arrived a few minutes after F1 doctor Sid Watkins. Senna was still breathing autonomously but had gone into a coma: he had lost a lot of blood from the wound above his right eye, as well as having a fracture at the base of his neck due to the suspension that had detached from his Williams.

“TResuscitation had already begun but he gave no sign of life. We all immediately understood the gravity of the situation and decided to take the helicopter to Maggiore Hospital.

“Senna had already been immobilized, we had intubated him by doing a tracheotomy. In the helicopter, he was still breathing with the mechanical lung ventilator. His heart also slowed down but we were able to get him started again.

“In the meantime, we alerted Dr Maria Teresa Fiandri, at the time Primary of the Intensive Care Department and of the Bologna Major’s 118, who gathered the entire medical team, of which I was part, to be ready for our arrival.

“From the first images we understood how critical the situation was, the confirmation we had later with the electroencephalogram: he was flat, his brain did not respond to electrical stimuli.

“The bleeding was too intense and widespread due to both the injury to the right frontal lobe and the fracture at the base of the skull. Receiving little blood, Senna’s brain shut down and went into what we call electric silence.

“Despite a large amount of blood lost on the track, he only had a swollen face. A natural effect due to the trauma and very aggressive rescue therapies that are given to unconscious patients. The body remained unchanged.

“We tirelessly continued with resuscitation methods, with the machinery at our disposal, everything that could not be done directly at the scene of the accident: we took care of the vascular accesses with infusions in the most stable ways, changed the tracheotomy with a more consistent one, administered some drugs.

“I can assure you, we tried everything but there was nothing we could do. With Senna’s brain death and, after his heart stopped beating, we found ourselves faced with another arduous task: to announce the death to the many people present at the hospital.

“Without a doubt what impacted me the most was Berger’s entry into the room. I was impressed by the fact that he wanted at all costs to come in to see a friend of his who was dying. He who had already been hospitalized in the same room in April 1989. A rare and meaningful gesture.

“I was able to speak little to him, he was of few words, he remained silent and grieving on the sidelines. He didn’t want to talk, he already knew what was going to happen. I also remember that his personal physiotherapist Josef Leberer, the manager Julian Jakobi and Watkins came into the room.

“We talked to Sid a long time after Ayrton died, he was disheartened by what happened but I remember he didn’t cry. He told me that already from the moment he saw the crash he knew that it was impossible to save him.

“He came to Bologna with another helicopter together with Franco Servadei, a neurosurgeon specialized in operations on the cranial-spinal parts, who was with us in Imola, but was unable to intervene given the impossibility of saving the Brazilian.

“I still have clear images. Already upon our arrival from Imola, the hospital lobby was full of people who had seen the accident on television: the only way back then to find out about the news. Many journalists who arrived were accommodated in the main hall next to the Hospital entrance.

“Fiandri managed to find the words for such a difficult moment and despite the limited emotion of those present, the great sadness on their faces was noted. Some of them stayed for a long time even in the following hours.

“We tried to save Ratzenberger on Saturday and Senna on Sunday, but there was absolutely nothing to be done. But I want to say one thing: that damned weekend in 1994, where Rubens Barrichello was also seriously injured [on Friday] showed the world how an emergency system must work in these cases.

“Ayrton was loved and you could see this too. Since that accident, F1 has changed, especially from the point of view of safety,” concluded Dr Gordin.