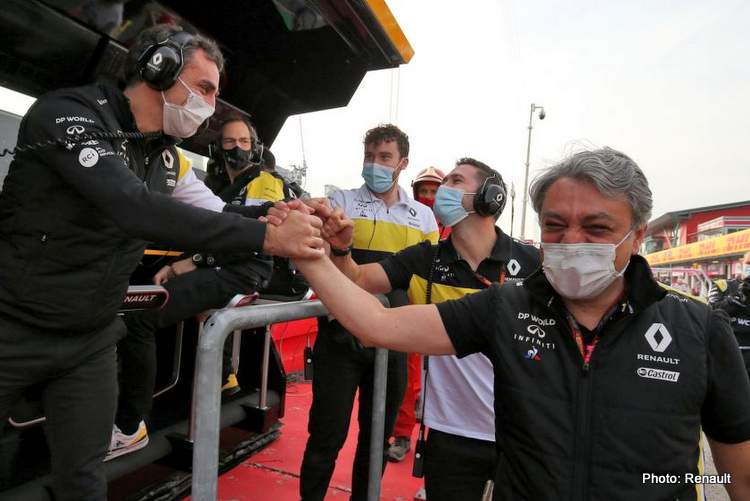 Renault CEO Luca de Meo has shed no new light on why Cyril Abiteboul disappeared on the eve of the Renault F1 team changing colours to those of the French auto giant’s Alpine brand.

Abiteboul had masterminded the return of Renault’s double-F1 World Champion of Fernando Alonso to the team for 2021, and seemed set to remain in the role of team principal. But early this year the F1 world was collectively taken by surprise as his immediate departure from the company was announced.

Some have reasoned that Abiteboul paid the price for not delivering, despite the fact that Renault last year did score three podiums and more points than they had since their return as a team in 2016.

When asked by Motorsport-Total about the change of leadership and the new management strategy, De Meo explained: “The question is a bit complicated.

“Alpine is one of four pillars of the renaissance,” he said of the brands Renault, Dacia, Lada and Alpine and added: “The F1 team is absolutely integrated into the mainstream strategy of the Renault Group.”

With long-time and homegrown Renault man Abiteboul out the door, outsiders have been brought into the helm, with Laurent Rossi promoted to CEO of the Alpine project (team and road cars) with Marcin Budkowski (Managing Director) and Davide Brivio (Racing Director) running the day to day operations of the team.

De Meo elaborated: “You need people who are part of a small, agile unit, but who also have a connection to the [bigger] cause. When I came in July [2020] we worked out the renaissance plan together, because Laurent Rossi was responsible for the strategy with a lot of experience in other companies. He’s an engine engineer, he’s very passionate. He likes to work with the mechanics.

“It is very important that the Alpine story is not just a racing story but also a business story. We have the right guy with the right attitude who looks at things from a slightly different angle,” insisted De Meo.

Gone from the team is the traditional team principal structure, in place a triple-pronged leadership.

“We haven’t changed that many things just tried to find a new set-up, a flatter and more direct structure. We needed that,” revealed the Renault boss before thanking Abiteboul and also Jerome Stoll, who resigned as President of Renault Sport last December, for their role in the team.

“They started in 2016 or 2017 and said goodbye with a few podium places in 2020. But we have to look ahead. It was a good start but now a new chapter is beginning,” added De Meo, again without really explaining why Abiteboul got pushed or if he walked.

Without a proper explanation from Abiteboul or his bosses, questions will remain for the sudden departure that no one saw coming at Alonso’s team.