Allison: Mercedes only more motivated by F1’s attempts to stop us 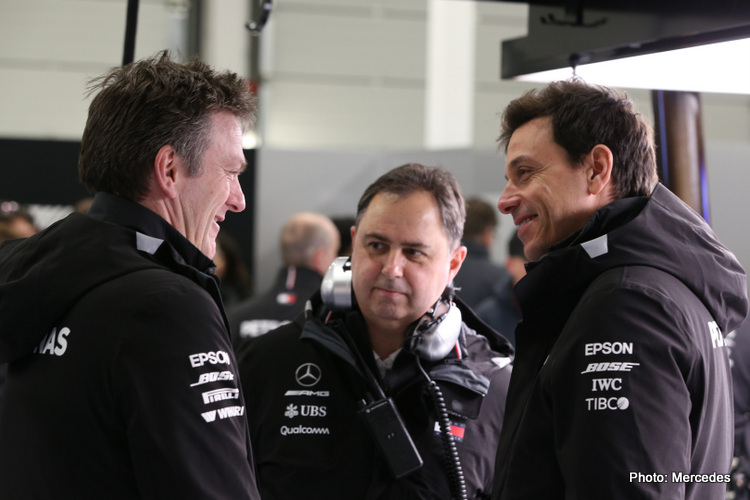 On an unprecedented run of seven-straight constructor’s championships, Mercedes have completely dominated the sport since the introduction of the V6 turbo hybrid engines in 2014.

And yet while it would be natural at this point for complacency to start slipping-in, Allison says the introduction of a radically different technical and sporting regulations in 2022 has ensured the fire stays lit a while longer.

“You have unintended consequences with many things and if you are sitting, as we are, happily at the top of the pyramid right now — but not in any way feeling like you are securely placed there and that you’ve got to keep scrabbling your way back up to that apex position — then a lot of those changes do look like they are targeted at us,” he explained to the ESPN F1 podcast.

“They’re not — they don’t have Mercedes written on them — they have at their heart the idea that they don’t want a pyramid, they want a continuous churn of teams that are capable of winning one day and not winning the next, and for each weekend to be unpredictable.

“But if you are in the position we are currently in, then it doesn’t feel that way, it feels like this is a set of rules that are designed to try to make sure a team like us can’t exist in the future.

“The potential unintended consequence of that is that if you are seven years into a winning streak and finding it difficult to come up with fresh rhetoric that gets people stirred up for the challenge of an eighth or a ninth, then in many ways the sport does you quite a big favour by coming up with a set of rules that are aimed squarely at your heart.

“There is nothing more motivating for this group of people than to set to this new challenge and go, ‘We’ll show you! We’ll show you that we will not go quietly into the night!’

“That’s the thrill for us now, to take this regulatory challenge and, as we have done with previous ones, try to show afresh what we are made of and that we are a team that just wants to try to do the best it possibly can.

“With luck, that best is good enough to be at the front.”

Additionally, Allison said his team was trying to learn from the end of previous dominant runs by Red Bull (who won four-straight from 2010-13) and Ferrari (six-straight from 1999-2004) and strike a balance between keeping individuals engaged in the team while ensuring the team was worth more than the sum of its individual parts.

“We have at least been very aware that those are the risks,” he said. “Because the cycle of success and subsequent decline all of us have seen happen a few times and many of us have actually lived through it in other teams.

“So a big amount of effort is put into trying to nurture the sense of team spirit we have here … [but also] making sure we have some sort of succession plan for the key roles in the team for when people are spent, because it is a sport that uses you up gradually because you have only got a certain amount of vim and vigour to keep at this level of intensity, and when people have given their all, enjoyed every drop of it but are ready to hand the torch on, it’s important to make sure there is someone to hand that torch to and that the company can exchange from one to the other seamlessly without it causing a loss of form.

“There have been a number of exchanges like that that we have been able to manage and show a resilient team structure. That’s the things we have tried to do, but it would be completely ludicrous for me to say “and therefore we have the winning formula” because it’s completely against the first thing I said, which is the complacency that all of us feel and need to remind ourselves that it is simply not a given.