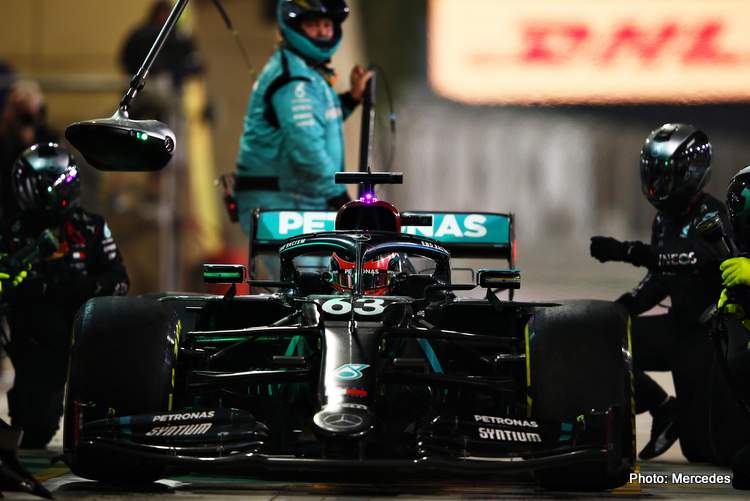 George Russell did everything he had to do win the 2020 Sakhir Grand Prix in his first race driving Lewis Hamilton’s title-winning car, but twice (!) he was denied, in the end what looked like might be a fairytale victory turned to heartbreak for the Briton.

Off the line, unlike at Williams, George was superb as he out-sprinted the sister car into Turn 1 and scurried into the lead as Valtteri Bottas wobbled around but stuck gamely to his teammate’s rear-wing.

Thereafter George controlled the pace, with Valtteri chasing and after the first pit stops, he was well in the lead and we heard the first loss of power complaints over the #63 car radio..

But an already crazy race (first lap incident) went manic when in a crazy five minutes Mercedes somehow managed to snatch a one-two away from their drivers a with a diabolically messed up double-stack pitstop that broke many hearts on the night.

Most of all, with a mere four hours, their super-sub who shone all night bettered Valtteri in a car the Finn has been in for well over 120 hours this season until a puncture added more misery to the regular Williams driver.

“I can’t really put it into words to be honest. Jumping out of the car… it wasn’t a nice feeling. I’ve had races where I’ve had victories taken away from me, but twice? I just couldn’t believe it. I gave it everything I had.

“I was managing the race at the start, I felt confident, comfortable, managing the gap to Valtteri. Then obviously we had the muddle up in the pit-stop, that put us on the back foot, I had to overtake. I think we still could have caught Sergio, we had such a tyre advantage, the car was so quick.

“Gutted. But incredibly proud of what we have achieved and happy to have had the opportunity,” added George who won over a legion of fans with a sparkling performance in the desert night.