Leclerc: Extremely happy to be starting in fourth 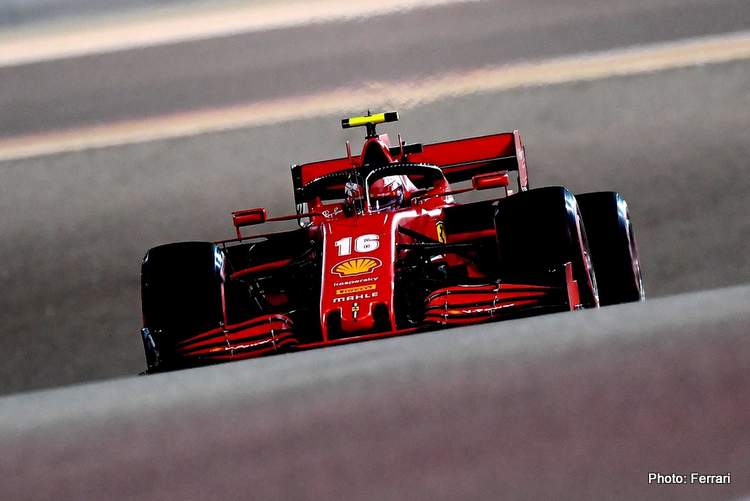 Charles Leclerc proved once again why he is such a formidable asset for Ferrari after wrestling the gutless SF1000 to fourth place on the grid for Sunday’s Sakhir Grand Prix, in comparison his teammate Sebastian Vettel was only good for 13th on the night.

It was a perfect lap, or at least as perfect as a lap can be in the below-par car he has been toiling with all year. And he knew it as he clambered out of the car, signalling to all that there would be no final hot lap, that’s as good as he had under the circumstances.

He had no more new tyres to bolt-on, and the last one was as special as it gets. Indeed he declared over the radio: “Woah, this lap was very good.”

So good, that it was a couple of tenths shy of the top time set by Valtteri Bottas in the Mercedes, it was a whopping seven-tenths than Seb in the other red car.

After watching the Mercs from their garage door, go out for their final runs, Charles told reporters, “We took a chance by going out at the beginning of the session in Q3. We could have waited, but because of the risk of traffic.

“I had a clear idea of what to do, I chose to go out immediately and I managed to put together a good lap. After that, I got out of the car because I had no more new tyres and I knew that realistically I could not beat the time I’d just set.

“Going into the race, I have to say it’s a bit of a step into the unknown, having lost most of FP2’s track time which means I haven’t done a race simulation. All the same, I think I got good pace today and I hope that will be the case in the race also.

“I don’t think we have the third-fastest car here, but I plan to make the most of my start position in this race.” added the 23-year-old from Monaco who last won a Grand Prix when he triumphed in Italy well over a year ago.

Team boss Mattia Binotto said of the effort, “Charles produced a brilliant lap to equal his best qualifying performances of the season. Fourth place was down to his amazing talent, all the more extraordinary considering he missed almost all of the second free practice session.

“It’s just a bit of shame that he couldn’t make the cut out of Q2 on the Mediums, as this would have put him in a better position for the race, but he tried his very best.”

Vettel, on the other hand, was confused, I generally had a good feeling driving the car today so I don’t really know what went wrong. Maybe on the straights I was losing a bit as well as in the middle sector.

“I was confident after Q1 but then we didn’t make it. I don’t know if this could be related to the power unit change. For sure my mechanics did everything well as the car was fine to drive.

“Taking care of the tyres will be difficult tomorrow but it could be the key to a good race. We will have a free choice of tyre for the start and we will see what we can do,” added the four-time world champion enduring his second last weekend as a Ferrari driver.