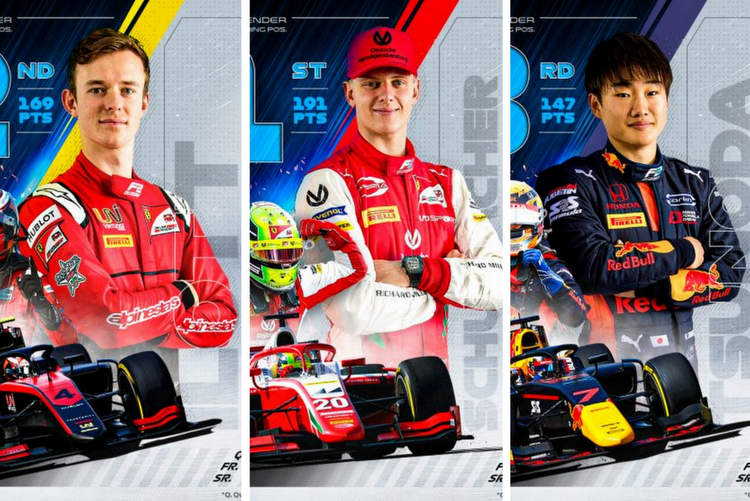 Two races remain in the showdown for the 2020 Formula 2 Championship title, three contenders are in a position to claim the crown with one, of not two, of the top drivers set for a spot on the 2021 Formula 1 grid.

Very little can be said of Mick Schumacher that hasn’t already been said. The Ferrari junior is rumoured to be the frontrunner for a seat at HAAS in Formula 1 after an incredible season in Formula 2, where he has silenced his doubters.

The German’s first season in F2 was solid, if unspectacular, and this left some fans wondering whether he would be able to step up in 2020. He’s done that in spades, taking 10 podiums so far, including two wins.

Schumacher stole the Championship lead for the first time this year during Round 9 at Mugello and hasn’t looked back, increasing his advantage to 22 points over Callum Ilott, with four races to go.

Ahead of the season finale, we evaluate his season so far.

In terms of race wins, his second victory of the year at Sochi was undoubtedly his most complete performance in F2 so far, but the most impressive thing about Schumacher in 2020 has been his unrelenting consistency.

To have scored 10 podiums from 10 rounds is remarkable. It is no secret that consistency is king in F2 and the German driver clearly understands this – he’d rather score a strong points’ finish than risk it all for the sake of another victory.

The German has earned himself a tag as the strongest starter on the grid. His trademark launch off the line has regularly put him in a position to score strongly, no matter where he’s lined up. It’s for that reason that he’s scored five of his podiums on Sunday, when starting slightly further down the order on the reverse grid. Rule him out of a race at your peril.

Schumacher would have ran away with the title by now had he started the season in his current form. The German didn’t score a podium until Round 3, while all of his pointless finishes came inside of the opening four weekends. In the six rounds since, he has scored in every single race and taken eight podiums.

There were a few hairy moments in those opening races as well, including his mistake in the season opener when he went wide during a fight for first with Ilott. Ultimately, all of that will be forgotten if he seals the title at the end of the season.

The final two rounds will prove whether his second half of the season was a purple patch of form or a coming of age.

“Above all, I feel a great anticipation and excitement,” he said. “I think there is a good chance for us to win the championship which is why I am very confident and optimistic. Obviously, there is still a long way to go and a lot of work to do, but I totally trust in the quality of our package.

“We have to focus on our own performance and make sure that we deliver what we are able to. This is our only task rather than looking what the others do. If we perform well and remain as consistent as we have been recently, we will keep the top position.”

The transformation of Callum Ilott from midfield runner to title contender has been one of the feel-good stories of the season, with the likeable Briton leading the Drivers’ Championship for large periods of the season.

We evaluate his season so far ahead of the showdown.

Where to start? Ilott’s season has been full of positive moments, from winning the season opener in Spielberg, to his historic victory on home soil at Silverstone. Or any one of his four pole positions – the most on the grid this season. On his day, the Briton is truly electric.

It was in a dramatic first race of the season that Ilott laid down a gauntlet and proved to the world of motorsport that his F2 title bid was the real deal. Qualifying third behind Felipe Drugovich and his teammate, Guanyu Zhou, the 21-year-old was dynamite off the line, lunging down the middle of the duo in front of him to steal the lead.

Ilott spent the rest of the race in a dogfight with Zhou and Schumacher for first, with all three of them holding the position at times during the race. This was, until Zhou suffered from mechanical issues and Schumacher made a mistake and went wide. Ilott had kept calm and controlled out in front and showed nerves of steel to close out his first ever victory in the Championship.

Ilott has an extremely strong record over the course of the season, finishing outside of the points just four times across the 10 rounds so far – a significant improvement on his 2019 campaign, when he missed out 10 times.

Yet, those four races have still cost him, as have the occasions when he hasn’t picked up as many points as he should have done. He qualified on the front row at Silverstone, but finished fifth after a stall on the formation lap forced him to start from the pitlane. There was also his spin in the following round at Silverstone, and the collision with Yuki Tsunoda from first at Spa that forced him to retire.

An awful lot of that spurned from poor luck, but it’s dented his points tally and that will be eating away at the Ferrari junior.

With two rounds remaining and just 22 points separating him from Schumacher, Ilott will be hoping he’s used up his bad luck for the season, and that he’ll be able to let his ability do the talking.

“I’m really looking forward to it,” said Ilott. “After a long break it will be awesome to get back in the car. Bahrain is a fun track that the team have a very good history at, so I fancy my chances there a lot. I’m going there to win and give it everything I have.”

It was less than two years ago that Yuki Tsunoda raced in Europe for the very first time, but now the Carlin racer sits third in the Formula 2 Drivers’ Championship and is heavily touted for a seat in Formula 1.

It’s been an incredible two years for the Japanese driver, who has adapted to the Road to F1 better than anyone could have imagined. Two wins, three poles and a further three podiums barely scratches the surface of just how impressive Tsunoda has been in his rookie season.

Tsunoda is 44 points off Schumacher with four rounds to go and has said himself that he is still targeting the title, even if his main ambition is to qualify for a Super Licence. We evaluate his chances ahead of Bahrain.

Yuki Tsunoda’s greatest strength this season has been his one lap pace. He’s been fastest in Free Practice four times – no other driver has managed this feat more than once – and he’s taken pole three times – only Callum Ilott has more.

The fact that Tsunoda has consistently been at the front has been key to his success- he puts himself in the best post position to get a result, without the need for a mammoth fight through the grid.

In terms of individual moments, Tsunoda highlight of the season was arguably his victory in Spa. Technically, the Japanese driver crossed the line second behind Nikita Mazepin, although the Russian was later penalised for defending a little too strongly, which handed Tsunoda the win.

The 21-year-old was a well-deserved victor and had looked dominant all weekend, after taking pole. He’d only lost the lead after a slow pit stop and appeared to be on course for the win, had the change gone more smoothly.

PUTTING IT ALL TOGETHER

Combining his one lap pace with that type of race craft on a more regular basis is imperative for Tsunoda going forward. Of the three times that Tsunoda has been on pole, he’s only converted one of those into a win, finishing second to Robert Shwartzman in Spielberg and second to Mick Schumacher in Sochi.

Converting those into race wins, especially the latter in Russia, would have gone a long way to challenging Schumacher for the top spot. There have also been ten pointless races throughout the season, which was always going to make things difficult for him.

There has been a clear improvement throughout the season though, with six of those pointless races coming in the opening four rounds. He needs to continue that upward trend in the final two rounds.

“I think that it will be really enjoyable,” Tsunoda said. “I will have to use all of my past experiences to make sure that I have good races. It will be really tough, but fun. I really want to deliver for the team, who have worked hard and helped me all year long and made the car really fast. I want to thank them with my driving. I am really looking forward to the race.

“The fight for the title is really tight. At the moment I am third, but it is so close and could very easily change in the final two rounds. There is a big gap to P1, but it is not impossible to finish first in the Championship. I am aiming to finish first and will push as hard as I can. It should be really exciting, and I am really looking forward to it.”