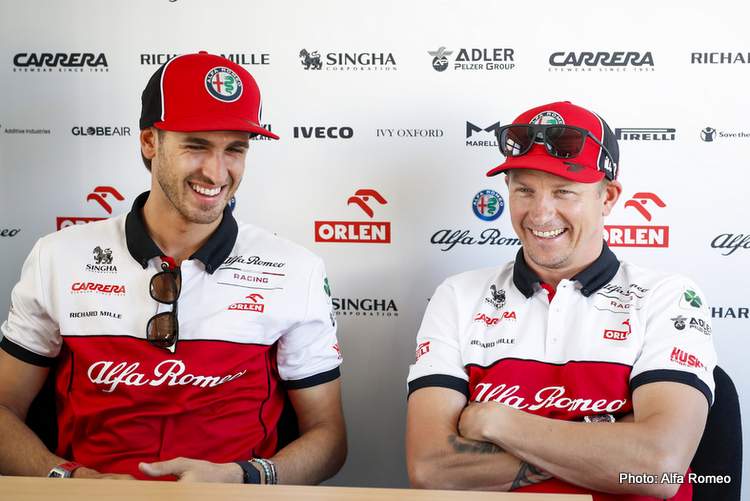 Alfa Romeo have rocked the Formula 1 paddock by confirming that their driver line-up for 2021 will remain unchanged, with well-past his prime veteran Kimi Raikkonen and underachieving Antonio Giovinazzi remaining with the Ferrari powered team.

Clearly, the Swiss-based outfit are going with tried and tested mediocrity for yet another year, pouring cold water on fairytale notions that Mick Schumacher would be joining the team alongside Kimi.

Today, the mighty Finn is a far cry from the incredible driver he was during his McLaren years and early Ferrari era. Today he is as good as a  journeyman, not long ago he was unable to beat Sebastian Vettel; one can only imagine what Charles Leclerc would do to him.

It will be Miki’s 20th year in the top flight.

Nevertheless, this grumpy version of a once precocious proper lad, is still box office material and hence his presence on the F1 grid still of value for a brand such as Alfa Romeo despite denying a worthy young gun a chance.

On the other side of the garage – the young gun they gave more than enough time to – Antonio should thank his lucky stars he has been retained. There is hardly a pundit who has not questioned why he is on the grid; he struggles against a 41-year-old who lost his mojo a long time ago.

On the other side of the coin, Charles Leclerc has set the benchmark for Ferrari Driver Academy alumni, and Antonio falls well short on all fronts.

But the bosses at the Scuderia thought otherwise and forked out the cash (or PU-supply barter) to keep Antonio at Hinwill. Now they will have to go elsewhere (probably Haas) to place young Schumacher, while Callum Ilot and Robert Schwartzman were also expected to be in the running.

Alfa Romeo Racing ORLEN will extend the relationship with Kimi Räikkönen and Antonio Giovinazzi to a third season as the driver pairing is confirmed for the team for the 2021 Formula One world championship.

The most experienced driver in the history of Formula One, Kimi Räikkönen will continue to bring his incredible mix of skill, racecraft and technical knowledge to the team for which, when it was competing as Sauber F1 team, he made his F1 debut in 2001.

The 41-year-old Finn, World Champion in 2007, has demonstrated time and time again his commitment to the sport, not least by delivering stellar performances like in the opening stages of last week’s Portuguese Grand Prix, when he overtook ten cars in the space of one lap.

One of Formula One’s most popular drivers, with a loyal following spanning the breadth of the globe, Kimi does most of his talking on track – but also within the engineering office, where his technical feedback and impressive sensitivity have been a valuable contribution to the team over the last two seasons.

26-year-old Antonio Giovinazzi, who made his F1 debut with Sauber F1 Team with two stand-in appearances at the 2017 Australian and Chinese Grands Prix and was announced as driver for his first full season with the Hinwil team ahead of the 2019 campaign, will aim to continue on the path of improvement that has so far defined his first two years in the sport.

A widely liked character both within the team and in the paddock, Antonio has demonstrated maturity and adaptability to go with his innate skill.

Following a debut season in which he established himself as a solid and dependable driver, the Martina Franca, Italy, native started 2020 with the right foot, scoring two precious points in the opening race of the season in Austria and adding a further top-ten finish at the Nürburgring.

His contribution extended beyond the track, with a keen eye for technical details, a skill honed during his two years as test and simulator driver for Ferrari, providing some solid work for the team back at base.

This announcement highlights the team’s commitment to continuity, with Kimi and Antonio making up a solid and well-matched driver line-up that delivers a healthy mix of experience and youthful enthusiasm.

The pairing gelled in with the team and each other from day one: the positive and open relationship between the drivers is visible not just trackside, but also in their hugely popular work with the team on social media, where Kimi and Antonio have quickly become fan favourites.

The announcement comes at a special time for the team, Kimi and Antonio. With Kimi having written his name in the history books with a new record number of race entries, 327, last week in Portugal (to go with the record number of starts he set at the Nürburgring), Antonio will become the first and only driver to race in three Formula One Grands Prix in his home country in the course of a season when he takes the start of the Emilia Romagna Grand Prix this weekend.

The team will also mark this occasion, as well as the renewal of its partnership with Alfa Romeo, by racing this weekend with a car emblazoned with the Italian flag as a tribute to the return of Imola to the F1 calendar, to Alfa Romeo’s 110th birthday and to the Italian fans.

Kimi Räikkönen: “Alfa Romeo Racing ORLEN is more than a team to me, it is like a second family. So many of the faces that were around me when I made my Formula One debut in 2001 are still here and the unique atmosphere of this team is what gives me that extra motivation to keep going in what will be my 19th season in the sport, next year.

“I wouldn’t be here if I didn’t believe in the team’s project and in what we feel we can achieve together. This is a team that values hard work over words and this fits well with my style: I am looking forward to next year and hopefully making some steps forward towards the front of the midfield with the team.”

Antonio Giovinazzi: “Alfa Romeo Racing ORLEN has been my home in Formula One for the last two seasons and I am happy this relationship can continue for one more year. The team has put a lot of faith in me and I have done my best to repay this confidence with hard work and commitment: we have achieved some good results.

“I feel I have done my part to make the team progress, but the road ahead is still long and there is much more we want to achieve together. There will be a lot of continuity between this season and the next one, so everything we work on between now and the end of the year will already count for next, and we are ready to give it all we have.”

Frédéric Vasseur, Team Principal Alfa Romeo Racing ORLEN and CEO Sauber Motorsport AG: “I am very pleased for the team to continue working with Kimi and Antonio for another season.

“Kimi is a driver who needs no introduction: his talent has been clear to everyone since 2001 and I still see the passion and motivation in him every time I see him at work. He can be trusted to deliver 100% of what the car can produce and he is a true leader for the people working around him.

“Antonio finished last year’s campaign strongly and he picked up where he left off and kept improving throughout 2020. From the track to the engineering briefings, Antonio has played a crucial role for our team and he has thoroughly deserved a new contract for 2021. His work ethic, commitment to the team and contagious enthusiasm are a huge asset for Alfa Romeo Racing ORLEN.”