Vettel: At the moment it’s beyond me 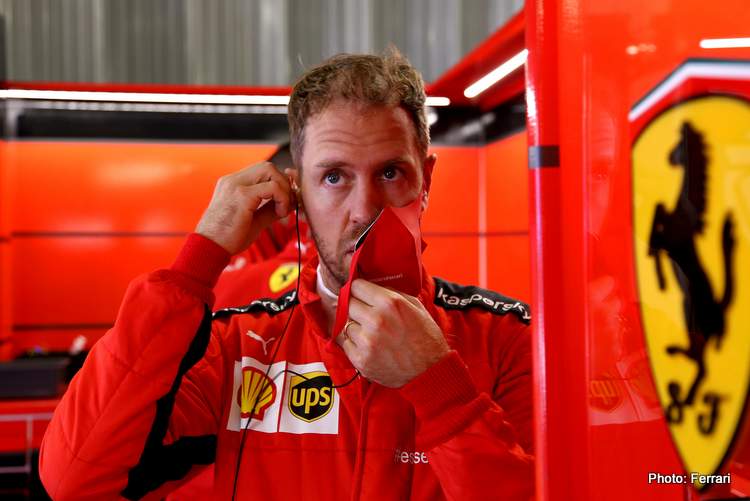 Sebastian Vettel has either lost his mojo or there is something seriously wrong with the #5 Ferrari SF1000; yet again the four-times Formula 1 World Champion was lost at sea, this time during qualifying for the 2020 Portuguese Grand Prix.

From day one at F1’s newest venue, Seb was uncomfortable os the twisty roller-coaster Portimao track. In FP1 he was nearly a second down on Charles Leclerc in the sister car; in FP2 the German closed the gap to three-tenths suggesting the scent of a sweet-spot, then the deficit to #16 in FP3 was four-tenths of a second.

In quali, it started well in Q1, Seb a couple of hundredths of a second down on Charles but then in Q2 it all went south for the older driver.

The Red pair, on mediums, were in different leagues; when the dust settled, Charles’ best effort was good for eighth but Seb could not get it together and was slowest of the 15 drivers in the second stanza of qualifying.

Afterwards, Vettel told Sky F1 Germany, “At the moment it’s beyond me. It’s not just beating, it’s like another league. Well, yeah, I try everything I can,” he added in reference to the nine-nil hammering he has received from his teammate so far this year.

“I think the laps I make, which I am content with, are still too slow. At the moment there is nothing more I can do than just getting everything out of myself and the car.”

In Q2, Ferrari bucked the trend of running softs by bolting mediums on to both their cars for the two runs, but their driver doubts it made a difference, “The whole weekend I was struggling a bit on the soft, for me the tyre was always washing out and we opened the tyres very quickly and suffered graining.

“The medium seemed to be resilient. I had a good feeling the first run, not so good laps, and then I thought easily I can do the time, but in the second run, I couldn’t get the tyres to work and that was the end.”

Adding peril to the injury of starting from 15th, is that the 53-time Grand Prix winner will be in the heart of a hectic midfield, a place he has never been comfortable racing in, especially when it comes to wheel-to-wheel combat.

Seb acknowledged, “The problem is we are stuck in traffic tomorrow for the whole race so it’s going to be the same as the last races.

“It’s very difficult to feel the rhythm when it’s different every time around, which is normally tyre temperature related, and seemed to make a big difference this weekend so far, so we’ll see what we can do tomorrow.

“However, it will be a similar situation to what we have experienced at some of the recent races. Unfortunately, there’s not much we can change on the car and we will have to do our best from the back.”

Rewind to a year ago, around this time in October, Seb was battling at the sharp end of proceedings finishing second in Japan, where he started from pole (!) and Mexico where he was runner-up in the race to Lewis Hamilton.

This year, things have not change for Lewis who is more than likely to win in Portugal after his qualifying masterclass, however one thing is sure: Seb will not have a sniff of a podium barring a miracle in Portimao on Sunday.

His alarming fall from grace is hard to grasp, not only for the flummoxed driver but even his detractors cannot believe that Seb has suddenly forgotten how to drive fast. Something is clearly amiss, with a sinister notion being that Ferrari are not playing nice with the driver that they replaced for next year with Carlos Sainz.

It’s an out-there theory, but it is not uncommon in motorsport let alone F1, for a driver to be marginalised by a team. What suggests that this is not happening is Seb’s resigned and honest demeanour for what is clearly a crisis of performance the German is going through.

Ferrari young gun Charles has a theory regarding his teammate’s woes, which he shared on Sky F1, “We speak a little bit with Seb and from what I understand he’s probably not at ease as I am with the balance we have in the car.

“The rear is moving quite a bit and I just feel quite good in the car at the moment. But I’m sure for tomorrow it will be a lot better for him,” added the Monegasque.