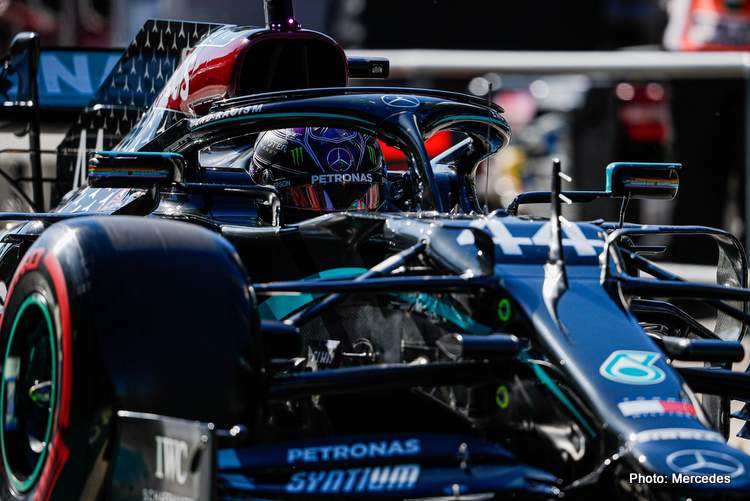 Mercedes dominated qualifying for the 2020 Portuguese Grand Prix, with claiming Lewis Hamilton claiming pole position for the 97th time and setting himself up for a record 92nd win on Sunday at Portimao circuit.

The Mercs looked mighty all session long, and it soon became clear that it would be a shootout between the pair with Valtteri Bottas pushing hard, only to be dethroned by Hamilton’s incredible last gasp effort.

For his final shot in Q3, Bottas did a one-lap flyer, while Hamilton opted for a second flying lap which, in the end, did the trick and the #44 car will start from its familiar place on the grid.

The World Champion said afterwards, “I can’t tell you how hard that was today. Yes, we’ve got a great car but you have to drive the nuts off of it to pull out a lap. Valtteri’s been so quick this weekend, he’s topped every session. So I’ve just been digging and digging and digging to find that extra time.

“At the end, I chose to do three laps to give me a chance at beating his time. That last lap, it got better and better as I went through it. It’s a really really hardcore circuit. There’s places where you can’t see where you’re going, you’re looking at the sky for long periods. It really is one of the most challenging circuits that I’ve been to,” added Lewis.

A rapid final run, and a 9️⃣7️⃣th pole for @LewisHamilton 💪

Bottas – who at one point looked a good bet for a top spot start until his teammate tore up that script – was a tenth shy of the best time.

The Finn reported afterwards, “I went for one lap [on mediums], it was my decision as it worked well in Q2 but it might be that doing the two timed laps like Lewis was better. The lap was good. Ultimately I should have gone for two times as well.”

Nevertheless, the records continue to tumble with every race weekend for Mercedes who have now taken pole position in all the dozen races so far in 2020, with Lewis bagging his ninth of the year.

Red Bull’s Max Verstappen will line-up third on the grid behind Lewis, again the Dutchman was best of the rest on another afternoon in which he simply lacked the firepower to trouble his rivals at the front.

Max summed up his afternoon in the Algarve, “The tarmac is quite difficult to bring the tyres in, so it’s a bit hit and miss. I’m happy though. I think the lap in Q3 was pretty decent, it’s very difficult to get the front tyres and the rear tyres to match but again, P3 is too far behind and of course a lot to play for tomorrow and hopefully we can stay close.

“Turn One is not really a place to dive. I think the start will be important but even then, we don’t really have enough information about how the tyres are going to hold up, so we’ll just feel our way into the race and see what’s going to happen,” concluded the Red Bull driver.

As is becoming his custom, Charles Leclerc impressed with a big effort to put the Ferrari SF1000 where it has no place being, while his teammate Sebastian Vettel never found the sweet spot, failing to progress beyond Q2 and ended the day 15th on the timesheets.

Fifth fastest was Sergio Perez who extracted the maximum from the Racing Point package, which Lance Stroll was unable to do in the sister car, on his return from missing the Eifel Grand Prix after having contracted COVID-19. He was 12th.

Alex Albon was half a second slower than Max in the other Red Bull, the Thai driver good for sixth place ahead of McLaren duo of Carlos Sainz and Lando Norris in seventh and eighth respectively – the pair eight tenths down on the benchmark time.

The top eight were covered by less than a second.

AlphaTauri driver Pierre Gasly was ninth, 1.1 seconds off the pole-winning lap, again out-qualifying teammate Daniil Kvyat who was only good for 13th.

Renault’s Daniel Ricciardo tagged the wall, after a trip through the gravel, late in Q2 which damaged the car and kept it in the pit box for the rest of the session. He was tenth.

Down the order, George Russell impressed yet again with 14th place on the grid for Williams, the team supposedly courting Sergio Perez for the Englishman’s seat, and sending a clear message with another comprehensive trouncing of teammate Nicolas Latifi; the Candian eight-tenths of a second slower than the Englishman in the sister car. 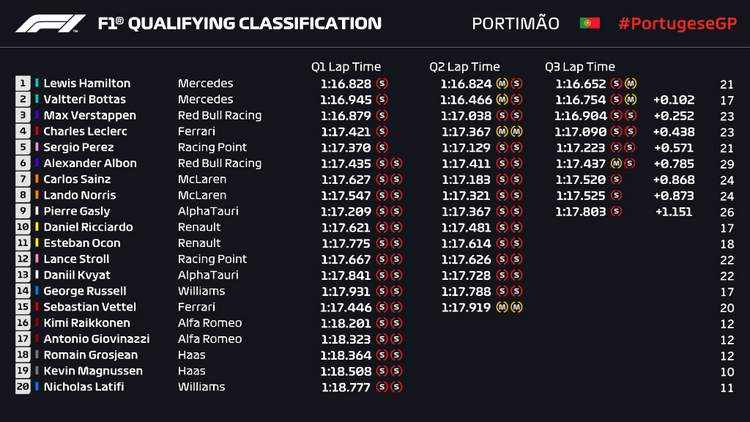