Senna: I find it amazing for you to make such a question Stewart 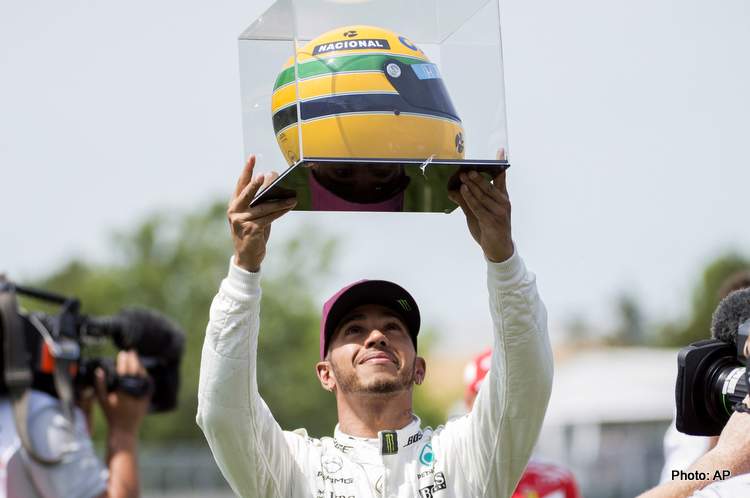 This is an Inside Line… I read with amusement the latest comments by Sir Jackie Stewart regarding Lewis Hamilton’s greatness and the headlines they inevitably grabbed this week which got the old memory cells hopping.

This is by no means the first time Sir Jackie has had a swipe at the soon to be most successful driver in Formula 1 history; he also had a go when Lewis stepped up to F1 claiming he needed more time; when Lewis messed up Sir Jackie was always good for a disparaging quote.

For me, even that was not a surprise because I was privy to Sir Jackie Stewart as a commentator, after his Formula 1 career, which came to a close in 1973. But for over a decade thereafter the Scot was a well-paid motorsport commentator for US networks.

He made more money as a commentator and ambassador, for whatever brands he could collect for his portfolio, out of the cockpit than he ever made in it.

Behind the microphone, he was obviously respected for his views, becoming the first of the superstar F1 commentators, thus he returned to the Formula 1 paddock with a microphone in hand for most of the races during the eighties.

On one such occasion, after the infamous 1990 Japanese Grand Prix when: 1. Senna rammed his McLaren into Prost’s Ferrari; or 2. Alain slammed the door on Ayrton.

Take your pick; the Senna fan that I was went for the latter as did those of our ilk, while the ‘Prosties’ would put a tick next to number one. As did Stewart at the time.

After the McLaren driver had mathematically clinched that year’s title, thanks to the incident which also eliminated Prost his closest title rival in 1990, Sir Jackie questioned Ayrton’s actions and motives into Turn 1 at Suzuka that day.

Ayrton was wary of British and French media folk at the time who lobbied their own drivers to the detriment of the late Brazilian legend who was scorned by most British media from the year he beat local darling Martin Brundle in that fraught but so memorable 1983 Formula 3 season.

Ayrton also vetoed another Brit-fave Derek Warwick when Lotus were looking for a driver, which incensed the always tribalistic media on the island, who forever looked for an excuse to have a good go at Ayrton.

Sir Jackie was among them. When Ayrton lived, the Scot was a big Prost fan because the great Frenchman was always likened to Stewart himself, which fed his famously insatiable ego.

Thus him struggling to acknowledge Lewis’ greatness is no surprise because he also failed to come to terms with what Ayrton achieved and the way he went about it.

Behind the microphone for the mighty ABC’s Wide World of Sports, Jackie was able to be accuser, judge and jury all rolled into one, and he used that power to keep himself relevant for decades, until now even.

But these days there is no mic and no huge exposure he had at the time, however, his song remains the same; like that of an old, much-loved uncle yodelling the same sad tune over and over again, ignoring that times have changed so much his song is no longer pertinent.

As F1 fans we indulge it with fond pity, after all he was Boss of the sport we love for many years.

As an editor, you suspect that whenever Sir Jackie speaks it is to keep himself relevant, inadvertently or not and, as in the great Senna interview above, it is clear that after all these years, the protection of the Scotsman’s own legacy still remains paramount; a basic instinct of self-preservation.

However, importantly, it must never be forgotten what Sir Jackie did for motorsport; his lobbying saved more lives than we dare imagine and his exploits in race cars, let alone F1, are the stuff that make him a Living Legend of our sport. That can never be taken away from us.

Returning to the Senna interview, Stewart’s goading on the day backfired because not only did Ayrton sucker punch him by referencing the interviewer’s illustrious racing experience, “I find it amazing for you to make such a question Stewart.
Before adding, “Because you are very experienced and you know a lot about racing and you should know that by being a racing driver you are [at] risk all the time by being a racing driver means you are racing with other people.”
Followed by the chilling and immortal, “If you no longer go for a gap that exists you no longer a racing driver.”

Fast forward 40-years, Lewis has filled the Ayrton-void for Sir Jackie, as his latest comments illustrate yet again. But I see no malice but rather he needs a big hug and to be told: “Jackie we love you, you will always be among the greatest.”

But, also there among the F1 GOATs, whether he likes it or not, will forever be Ayrton and Lewis.

Thus the final word to the soon to be seven-time F1 World Champion, “I have so much respect for the past legends, even those that do continue to talk negatively about me all the time. I still hold them in high regard because I know it was a different time in history. It was incredibly tough for them.

“In 20 years’ time when I’m looking back… I will not be talking down any young driver that’s coming through and succeeding, because a responsibility as an older driver is to shine the light as bright as possible and encourage those.” Amen to true greatness.