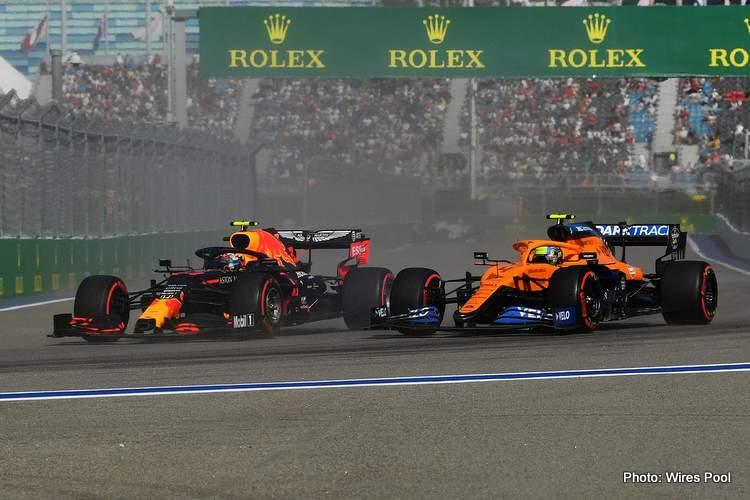 Red Bull team principal Christian Horner must’ve been watching an ‘alternative’ 2020 Russian Grand Prix if his team from the race on Sunday report is anything to go by.

Alex Albon once again had a woeful weekend relative to his teammate Max Verstappen, yet Horner chose to view the Thai driver’s well-below-par afternoon through rose-tinted glasses.

On Saturday, in qualifying at Sochi Autodrom, Alex was 1.2 seconds down on Max in Q3, the difference between second place on the grid and tenth.

In the race, he made a bad start and then spent the rest of the afternoon toiling in no-mans-land, battling with Alpha Tauri’s, McLaren’s and Williams, in a car that is anything up to a second quicker than those rivals.

He made hard graft of it to finish tenth, almost a lap behind Max in the sister car and, notably, behind the Alpha Tauri boys Daniil Kvyat in eighth and Pierre Gasly ninth. The latter overtaking the man who replaced him at Red Bull late on in the race as Karma decided to fool around

Despite this, Horner found little fault in Alex’s dismal race in Sochi, “It was a tough afternoon for Alex who started in 15th place following a grid penalty for a gearbox change.

“He lost ground on the opening lap but with the Safety Car we effectively had a free stop, only conceding one place as we changed Alex from the soft tyre to the hard which he was more comfortable on.

“He was then able to make progress through the field with some great overtaking moves,” added the Red Bull team boss inexplicably.

What did he see that we did not see?

Indeed Alex has great racecraft – in his karting heyday he set the benchmark – but on this day the more memorable moves were the ones made on him, namely Gasly. Sure the Frenchman was on fresher tyres…

But the question is what was the #23 Red Bull doing so low down in the first place when the other Bull was up at the very sharp end?

Alex admitted his strife in the team report, “Today was a lot of work for one point and it wasn’t an easy race. We struggled at the beginning to overtake and get through the pack on the hard tyre and so we lost a lot of time.

“When we swapped to the mediums it was a little better and we did as much as we could but it was difficult out there and a frustrating race. We were just in traffic the whole time without any clean air so we couldn’t put down any really good laps.

“After the gearbox penalty, today was about damage limitation and now I’m already focusing on Germany and having a cleaner weekend in two weeks’ time,” added the 24-year-old.

The afternoon in Russia will have done Alex’s shares no goo at all, that Red Bull have kept the faith – even after a questionable performance on the day – is admirable for an organisation not known for their patience.

After all this is the team that ditched Gasly or Albon after the Frenchman was only given 12 outings in the Red Bull, yet 19 races into his career with the team Alex is no better than he was when he started, in fact he showed much more promise last year in his first races with the team.

But that promise has not evolved, in fact, this is about as close to a flop we have seen from a driver promoted to a big three-team, worse than the Kvyat and Gasly flops when they stepped up to partner Max.

And hence the quandary the energy drinks brigade find themselves in: Who can partner Max and not get demolished?

Because the Alex Albon experiment is failing no matter which way Horner spins it.