Mugello gets a unanimous thumbs up from F1 drivers 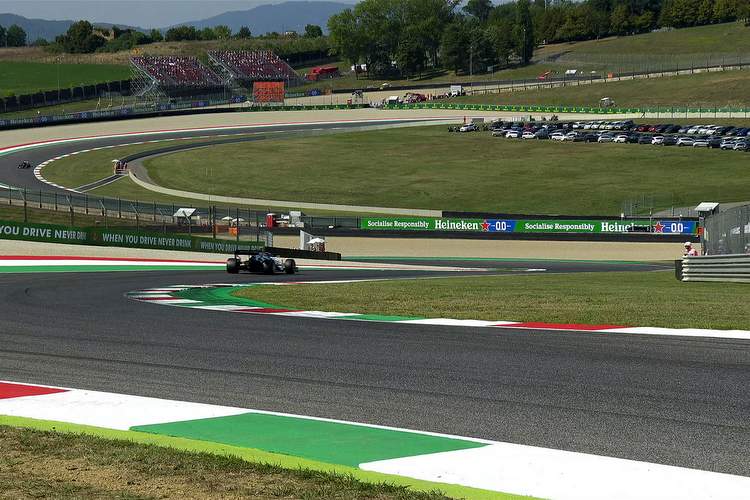 It’s unanimous! Mugello has impressed all the drivers who will line-up for Sunday’s first Tuscan Grand Prix at the old-school Autodromo Internazionale del Mugello – each and everyone inspired by the challenges of one of the more popular MotoGP venues.

The track, which lies along a hillside in Tuscany, is blisteringly quick, mingled with a couple of tight sections which complement the flow while punishing errors, with little or no run-off areas which leave very little room for mistakes when drivers are exploring the edge.

Two decades ago a fresh-faced Kimi-Matias Räikkönen, with only 23 car races under his belt, landed himself a test drive in F1 with Sauber at Mugello in September 2000.

Kimi took to the top flight like an Eskimo to Ice, lapping half a second faster than the team’s regular driver Pedro Diniz. A couple of fo tests later and the 20-year-old was an F1 driver, kick-starting the legend Kimi has become.

How fitting that in the sunset of his career he will race at the venue all these years later, “It’s nice to be back driving at Mugello, the track where I made my first laps in an F1 car, 20 years ago. Surely my neck feels a lot better now than it did at the end of my first day of testing!

“The track has the same feel, it’s not much different with the exception of some kerbs. It’s a difficult circuit, so finding a setup can be challenging, especially being here for the first time and with no data to use as a reference. It’s quite a unique layout in many ways and it needs a different approach,” added the 40-year-old ahead of his 321st Grand Prix start in the top flight.

The rest of Kimi’s colleagues were in accordance after three-hours of track action on Friday:

Lewis Hamilton: “I have to say, this track is pretty intense – so fast and challenging, it’s amazing to experience. I love it! There’s no time to play around here and it’s one of the most physically demanding that I’ve driven for a while.

Valtteri Bottas: “It’s been a lot of fun today and I’ve enjoyed every single lap. The whole opening section with the high-speed chicanes and the second sector is just amazing and the car felt pretty good out there.

Daniel Ricciardo: “It’s so good to drive at Mugello. On one lap it’s fun but even on the long runs, which are normally a lot slower, there’s no holding back as it’s all high-speed. Turns 8 and 9 are nearly flat out on high fuel, so it’s quick and keeps you on your toes.

Charles Leclerc: “Driving an F1 car around this circuit is unbelievable. In all the fast sections it’s pretty impressive.

Sebastian Vettel: “It was an interesting day. Mugello is a very nice track which is very enjoyable for the driver, even if it is quite brutal on tyres.

Esteban Ocon: “It’s my first time here as well. It’s a fantastic feeling to drive at Mugello and it didn’t disappoint from expectation! When we walked the track yesterday, I just thought it’s going to be awesome to drive. It’s a great challenge for us drivers, quite physical, and it’s also going to be particularly tough on the tyres.”

Romain Grosjean: “The circuit is good, really good in fact. It’s very fast, flowing and for us as drivers, it’s a pure pleasure. From a racing aspect, it could be trickier, but for now we don’t care – we’re just going out there driving fast.

Kevin Magnussen: This is a really cool track. It’s extremely fast with lots of high-speed corners – it’s really a pleasure to drive this track.

Pierre Gasly: It was quite impressive and very enjoyable to drive these F1 cars on such a track with so many high-speed corners, it was very cool!

Daniil Kvyat: “It’s definitely a cool track and it was great fun to drive.”

Sergio Perez: “I’ve enjoyed driving around this track: there is no room for mistakes and that’s really fun. The run-off here is very close to the track, so the pressure is on the drivers – and that’s how it should be!

Lance Stroll: “Mugello is such an impressive circuit in a Formula 1 car and the speed in some of the high-speed corners is amazing. I can’t wait to tackle the circuit in qualifying on low fuel when we can really push hard.”

Antonio Giovinazzi: “The track here in Mugello is amazing, especially with modern Formula One cars: it’s just so fast, with many high-speed corners that really feel great in an F1 car – even if the neck will really feel it on Sunday!”

Andrea Stella, McLaren Racing Director: “It’s really interesting being back at Mugello with Formula 1 cars again – and in particular with these super-quick cars. It’s a fantastic track and a truly spectacular venue.”