Haug: I negotiated with Sebastian when he was at Toro Rosso 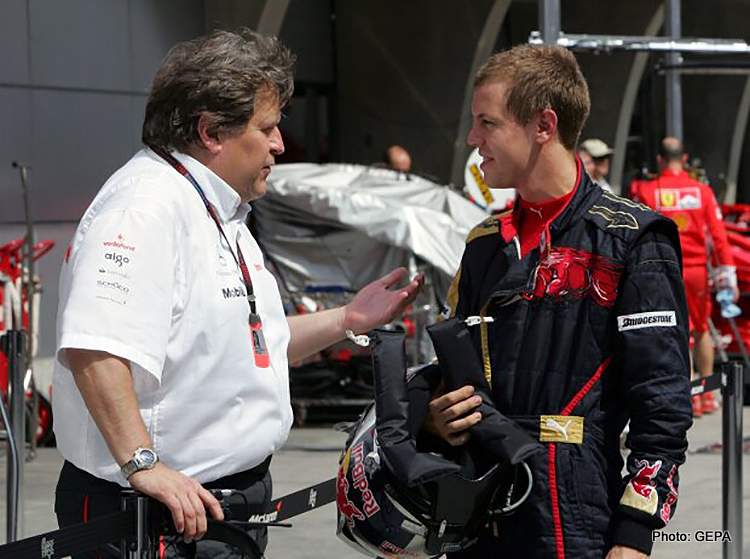 Sebastian Vettel might have been a McLaren-Mercedes driver in 2008 when negotiations took place between the two parties, but a deal did not materialise according to the man tasked to try to make it happen.

At the time, Norbert Haug was head of Mercedes motorsport and a big wig in the Formula 1 paddock as the German company powered McLaren – the top guns in those days.

Vettel was the young up and coming kid at Toro Rosso making waves after BMW-Sauber inexplicably released him to Red Bull in 2007, despite having finished eight at the United States Grand Prix on his debut at 19 years and 53 days. He was the youngest ever to do so in the top flight at that point in history.

It was a one-race deal where he had stood in for injured Robert Kubica. Many took note and Red Bull came knocking; four races later Vettel was in at Toro Rosso and Scott Speed out. But before that happened, Vettel’s performances also piqued Haug’s interest.

“I negotiated with Sebastian when he was at Toro Rosso,” he revealed in an interview with F1-Insider, recalling how he tried to lure Vettel to McLaren-Mercedes, before they opted for Heikki Kovalainen, to be Lewis Hamilton’s teammate in 2008.

Haug continued, “Who knows how Formula 1 history would have developed if we had come to an agreement back then. But, at the top everyone negotiates with everyone at some point and those who do not admit that keep it to themselves. But it’s still true.”

While Hamilton won in 2008 thereafter he had to watch as Seb rewrote the history books on his way to four F1 World Championships in as many years with Red Bull. Of course, before the Merc driver’s incredible run began.

A decade later, the Vettel-Ferrari divorce that plays-out live every Grand Prix weekend makes for painful viewing as does Seb’s antics in the heat of battle. Begging the question: What went wrong?

Haug ventured, “Anyone who is angry will say: everything. But of course, that’s not true at all. Just as Mercedes managed to create prime conditions for victories and world titles for Lewis Hamilton, Ferrari failed to do so for Sebastian Vettel.

“The last Ferrari title win – the older ones among us remember – dates back to 2007. And if we hadn’t been stupid enough at the time not to pit Lewis Hamilton in time at the Chinese Grand Prix, he would certainly not have landed in the gravel trap in the pit entrance and would have got the only point missing at the end of the world title.

“It is not presumptuous to say that Ferrari outside of the Schumacher era and after the Niki Lauda era in the 1970s didn’t break that much. I love and appreciate Ferrari, but no love and no appreciation can destroy facts.”

The reality is that today at 33, Vettel is without a drive after his unkind dismissal from Maranello, although a deal with Aston Martin is allegedly pending, there is a persistent suggestion he will take a sabbatical in 2021.

But, whatever transpires, between the Belgian Grand Prix weekend, next up, and his departure at the end of the season, Haug’s advice is: “Sebastian absolutely has to show that he has his fast and talented teammate Charles Leclerc under control or is at least his equal.

“Those who are regularly left behind by their teammates are the second choice in Formula 1, which is by no means my opinion, but the law of the industry,” explained Haug who was Mercedes motorsports boss for 20 years.