Wolff: I can’t listen to Mattia’s complaints any more 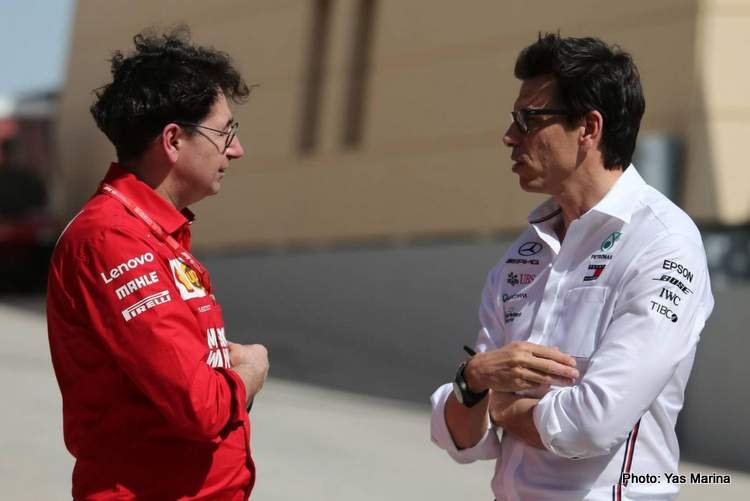 Mercedes boss Toto Wolff says “enough has been said” over Ferrari’s 2019 engine and says he “can’t listen anymore” to Mattia Binotto playing down its aero performance in the build-up and during the 2020 Formula 1 season-opening Austrian Grand Prix weekend.

Ferrari moved to lower expectations prior to the delayed 2020 season-opener in Austria after revealing that it had altered its aerodynamic development in the wake of poor correlation.

Ferrari has struggled throughout the weekend at the Red Bull Ring, with last year’s pole sitter Charles Leclerc taking only seventh in qualifying, while Sebastian Vettel was knocked out in Q2.

It continued a theme from testing which appeared to indicate that Ferrari had relinquished its straight-line speed advantage without improving its corner speed.

On Friday Vettel suggested that Ferrari was struggling everywhere with its SF1000, which he labelled as “draggy”.

Wolff, along with Red Bull team boss Christian Horner, suggested on Friday that Ferrari should release details of the settlement it reached with the FIA over its 2019 power unit, an idea that was swiftly rejected by Binotto.

“I don’t want to comment on this, I think enough has been said,” said Wolff. “This is more about the way things are being managed. And let’s not go back there.

“I think everything has been said back and forth, they haven’t shown great performance today, we want them to be competitive and race with us, race under the same rules.

“Nothing would make me more happy than if we have three or four teams be competitive out there and giving us a run for our money.”

On Ferrari playing down its aerodynamic performance, a terse Wolff commented: “Not they have talked it down, but Mattia has talked it down. And… er… I can’t listen to that anymore.”

That was on Saturday…

But the Italian team boss was clearly not listening, after the race on Sunday he again lamented the lack of punch in their package, “The 19 points we picked up here in Spielberg were also down to reliability, which is always vital, as well as the work the team has done here at the track and back in Maranello over this past week.

“However, it does not make up for the fact that, in pure performance terms, we are behind, more than we could legitimately have expected. That’s why we are pushing as hard as we can to bring updates to the car as soon as possible, although we know that no package can be a magic wand that radically changes the hierarchy among the teams.

“Having said that, we have seen in this first race that a few tenths more or less can make a big difference in terms of grid position, so we must leave no stone unturned,” added Binotto.

When the year-on-year speed loss was put to Ferrari-powered Haas’ Romain Grosjean, he replied: “It’s always difficult to compare different years but in general all Ferrari power unit users have moved a little bit backwards in qualifying at least and the others have improved a lot. I guess we had an advantage last year that we don’t seem to be having.”

His team-mate, Kevin Magnussen, said: “People can speculate for themselves [on the speed loss] all they want but it’s not something I’m going to speculate [about].”