Hamilton: No driver was forced to take a knee 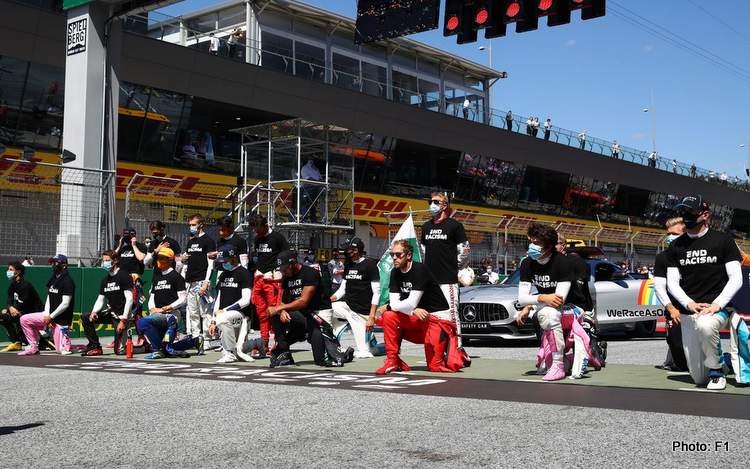 Lewis Hamilton has said that he did not force any of his competitors to take a knee ahead of the Austrian Grand Prix on Sunday.

Hamilton was one of 14 drivers who took a knee to protest racism ahead of the race, but the six-time world champion dismissed the claims that he had pressured the other drivers into kneeling.

Max Verstappen and Charles Leclerc were two of the six drivers who did not take a knee and Hamilton said that nobody should be forced to do it.

“I am aware of some opinions from some of the drivers but that’s more a private thing and I wouldn’t like to share. But I think ultimately nobody should be forced to into a scenario where they have to kneel.”

“There is a story, at least one out there, that is really incorrect,” he added.

“There were obviously several that said they wouldn’t. And I let everyone just say what they wanted to say and I just opened up to them and said ‘look guys, just so you know, I will be doing it, but you do what you feel is right’. I’m really, really grateful for those who did kneel along with me. I think it’s still a really powerful message.

“But ultimately whether you kneel or do not kneel, that’s not going to change the world. It’s a much, much bigger issue across the world than just something as little as that. But for me, personally, I think everyone had a right to their own personal choice and for me personally, that was what I felt was right to do. But I didn’t make the decision until last night.”

The Brit also distanced himself from some of the additional political positions that have been associated with the Black Lives Matter movement.

“There are certain people that are speaking about it and making it more political than it is,” he said.

“Then there are obviously, I think it’s London Black Lives Matter or the UK Black Lives Matter that have spoken on some more political issues. But I think the people that are at the rallies, the people out there marching, are fighting for one cause, and that’s for the equality. And it’s not a political thing, necessarily. I think for them, that’s what I went to London, that’s what they’re out there doing. When I wear the shirt, when I speak out, that’s what I’m supporting. I’m not supporting necessarily the political movements. That’s something completely different. So I think it’s important to try and keep it separate.”

Kneeling has become commonplace in sport in recent years as a form of protest against racism, with Premier League players all taking a knee ahead of matches since the restart in June.

The movement began in the NFL when Colin Kaepernick began kneeling during the US national anthem and Hamilton said he had intended to make a tribute at the time.

“This all started with Colin Kaepernick in the NFL,” he said.

“I think he sat down for the national anthem and he got a lot of backlash. And then he spoke to someone, I can’t remember who it is he spoke to, his team boss or something like that, and they suggested to take the knee. I thought that was a really powerful statement that he made. And then he lost his job. And didn’t get his job back. And he was a great athlete.

“I’d actually spoken to him a couple of years ago, shortly after that before the US Grand Prix and I had a helmet and everything made in red with his number on the top. But back then I was kind of silenced, I was told to back down, don’t support it. Which I would say that I regret. So it was important for me to make sure that during this period of time I did my part.”