Rossi: After MotoGP I’d like to do five or six car races a year 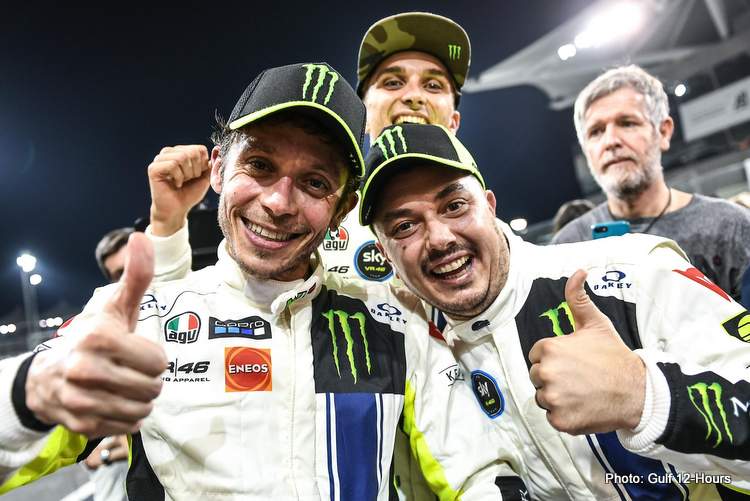 MotoGP legend Valentino Rossi says he plans the next phase of his career on four wheels rather than two, while Formula 1 is obviously off his radar the likes of Le Mans are in the Italian’s radar.

Last week, the 40-year-old Italian got at the wheel of Lewis Hamilton’s title-winning Mercedes in a high profile PR event.

“That would work for me,” Rossi laughed when asked by Sky Italia if he will permanently swap places with Hamilton’s teammate Valtteri Bottas from 2020.

Rossi was speaking in Abu Dhabi, where he took a class win in a Ferrari 488 GT3 at a 12-hour race.

“Unfortunately, I’m starting to be pretty old, but if Bottas wanted to ride a Yamaha M1 bike beside Maverick Vinales, that’s ok with me,” he laughed again.

Rossi has a contract with Yamaha for 2020, but it is rumoured he will retire from MotoGP after that.

He has already said he wants to do Le Mans in the future. I’ve always said that after I finish on bikes, I would like a decade in cars,” said the seven-time MotoGP World Champion.

“I could do five or six races a year with cars that suit me the best. The 24 hour races at Le Mans and Spa are probably the best for this.”

Special opportunity for members of the UAE bike riding and racing community… meeting their hero, MotoGP legend @valeyellow46. Fantastic with his fans, and what a great moment to remember irrespective of what happens on track today. #Gulf12Hours #VR46 @ymcofficial pic.twitter.com/MuLvi11dTG