Hamilton: I could be on holiday, they could’ve shipped me the trophy 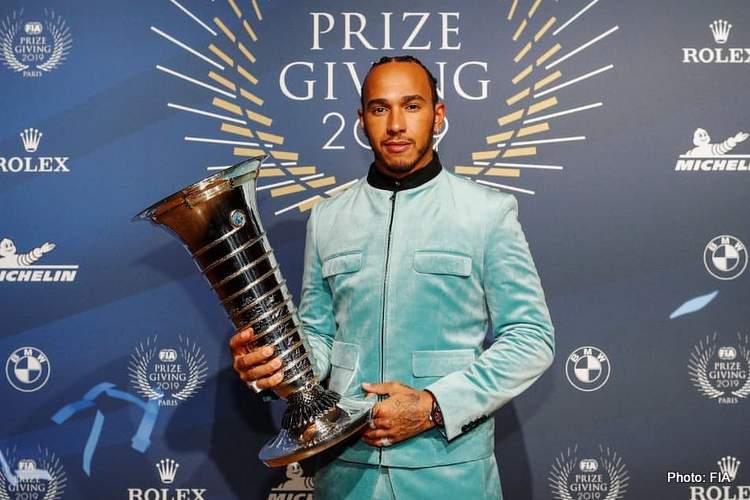 Motorsport legend Lauda, a triple F1 World Champion and one of the all-time greats as well as the Mercedes team’s non-executive chairman, died in May aged 70 after a lung transplant previous August.

The award was the result of a vote by permanently accredited media from the International Automobile Federation’s various championships.

There was also recognition for the late race-director Charlie Whiting, who died before the season-opening race in Australia, and French F2 driver Anthoine Hubert who died at the Belgian Grand Prix weekend in July.

Hamilton was last to receive his prize but the trophy has become a familiar object, handed to another driver only once in the past six years with now-retired teammate Nico Rosberg winning in 2016.

Appearing on stage in a zip-fronted sky blue suit at the black-tie event in the Carrousel du Louvre, the 34-year-old said it had been the best season of his life but hoped for even better in 2020.

The Briton had earlier told reporters, however, that he was no fan of such events, “I could happily be on holiday right now and it could be shipped to me. I´m not working my year for the actual trophy as such.”

Hamilton said that nonetheless, he enjoyed seeing others celebrate their successes and was inspired by the clips of their achievements.

Hamilton can equal Michael Schumacher’s record seven championships next year and looks set to surpass the great German’s milestone 91 wins, but said he had never been focused on such statistics.

“Every year is a blank slate, every season,” said Hamilton. “I use 44 on my car, I never use number one. I feel like every season number one is there up for grabs for everyone.”

Hamilton’s Finnish teammate Valtteri Bottas, who drove his Mercedes on stage before stepping out to collect the second-place driver’s trophy, might feel encouraged by those words.

Red Bull’s British-born Thai driver Alexander Albon was named rookie of the year, while Dutch teammate Max Verstappen, third in the championship with three race wins, took the action of the year for an overtake on Ferrari’s Charles Leclerc.

The best promoter’s award went to the Mexican Grand Prix for the fifth year in a row.